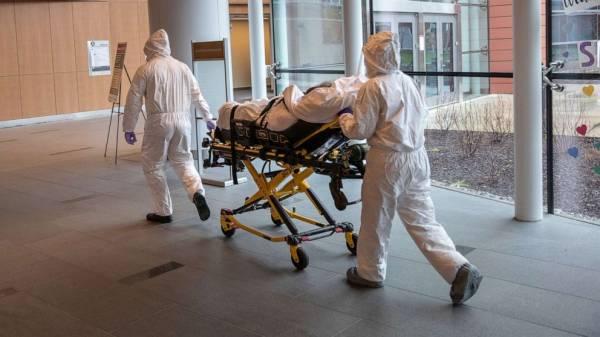 Dr. Sunny Jha, a University of Southern California anesthesiologist, recently treated a man in his 60s who tested positive for COVID-19. Since the disease is known to attack the lungs, Jha tested the man’s oxygen levels, though the man said he didn’t have any breathing problems or any other sign of low oxygen.

But the reading came back at 88%, a concerning far cry from the healthy mid- or upper-90s Jha was expecting from someone who didn’t show any outward breathing issues.

It was a suspected case, Jha said, of what has been dubbed “silent hypoxics” or “happy hypoxics,” which refer to anecdotes popping up across the country of some coronavirus patients who appear to be functioning normally but have surprisingly low oxygen levels. Though not immediately life-threatening, low oxygen levels could exacerbate health problems associated with COVID-19, if left untreated.

“One of the presentations of COVID may be silent hypoxia, when people are unaware they are deprived of oxygen and yet they are functioning,” said Dr. Hussein Kiliddar, a pulmonologist and critical care physician at Crozer-Keystone Health System outside Philadelphia. “These people have oxygen readings that normally should be above 92 [%] but now have readings in the 80s. They may be breathing faster, but they only start to be concerned when they find themselves getting tired from the increased effort required to breathe.”

It’s a condition that doctors say some at-risk people may be able to detect early with the help of a cheap, at-home device called a pulse oximeter, though experts are careful to warn that healthy people without underlying medical conditions should not rush out to buy the commercially available devices.

Doctors know coronavirus attacks the respiratory system including the small sacs deep in the lung where oxygen is transferred from the air spaces into the blood, but it isn’t clear why some COVID-19 patients may have low oxygen levels but apparently without the telltale symptoms of shortness of breath, dizziness or other expected symptoms of oxygen deprivation.

Usually when oxygen levels are sufficiently low, it may become obvious to the sufferer if they have a lung condition that causes symptoms. But doctors in hospitals from coast to coast told ABC News they’re concerned about patients suspected of being positive for coronavirus who may be walking around with low oxygen saturation levels without knowing it.

Dr. Jeffrey Moon, medical director for the Hospital of the University of Pennsylvania’s emergency department, said his department has seen “people coming in with COVID who are less symptomatic than we would expect given their low oxygen levels.” Moon said he saw one patient Monday who was talking to him “in full sentences” despite having a pulse oxygenation level of just 55%.

“It’s hard to believe what’s in front of you at times. There is this subset of COVID patients where I don’t believe my eyes,” Moon said.

MORE: In the 'epicenter of the epicenter,' were early heart attacks a missed coronavirus warning?

Doctors said they’re concerned about people going too long with low oxygen levels, because it can cause debilitating complications in critical bodily functions.

“You can get away with it for a while, but it is impossible to keep up with breathing at 30 to 40 times per minute,” Kiliddare said, as compared to the 10 to 12 breaths-per-minute a normal person should take.

In another example described to ABC News by Kiliddare, a patient in Pennsylvania did notice he was having trouble breathing — but by then his oxygen levels had already dropped to a seriously dangerous 68%. In that case doctors were able to put the patient on a BIPAP machine, which provides a form of non-invasive ventilation, and his oxygen levels rose to the 90s. He later tested positive for the coronavirus.

Dr. Martin Tobin, a renowned critical care physician at Loyola Medical Center in Chicago, agrees that there appears to be an issue, but cautions that for both doctors and patients, it’s more complex. He said some coronavirus patients could experience shortness of breath when their pulse oxygen levels were just fine.

A single number may be indicative of a problem, he said, but doctors should look more holistically at the patient’s lung function and clinical picture to see how the coronavirus might have affected them.

There’s also the possibility that silent hypoxia isn’t as silent as doctors think, because patients just might not be as loud about it as they should, according to Dr. Gerard Criner, Chair and Professor of Thoracic Medicine and Surgery at the Temple Lung Center.

“I think some of the problem is that patients may minimize their symptoms,” he said, both because when people are sedentary in their homes they may not appreciate shortness of breath.

Some patients may also avoid care out of fear of going to the hospital to be checked for what seems like a relatively minor issue amid the threat of catching the coronavirus, as ABC News has reported.

To help people understand whether they could be at risk for low oxygen, some doctors are cautiously recommending the use of at-home pulse oximeters, that simply slip on the end of a finger to determine how well oxygen is being carried in the blood to the parts of the body farthest from the lungs.

While hospital and medical-grade devices are more expensive, at-home versions can be purchased for around $50 and are generally believed to be accurate to within two to five percentage points depending on the brand, according to pulmonoligists with whom ABC News spoke.

But doctors also urged caution when it comes to at-home use. First, those who do not already have respiratory issues don’t need one to monitor for early signs of COVID-19, experts said. And, anyway, it’s not as simple as it sounds.

“Proper interpretation of pulse oximeter can be quite challenging and people can make the wrong decision if [the readings are] not interpreted correctly,” Tobin said.

Individuals concerned about their oxygen levels can also go low-tech and simply count their respiratory rate with nothing more than a watch with a second hand. Normally people breathe 10 to 12 times per minute.

If a person’s breathing rate is significantly higher than that, “you may not have enough oxygen in the blood and gas exchange may not be happening in the lungs effectively,” Kiliddare said. “In this case, your body is telling you to breathe faster and this can actually make you tired.”

Breathing is also supposed to be a quiet, background process, Kiliddare said. “Once you are aware of your breathing, something may be off,” he said.

But experts also warn that obsessive checking oxygen levels, whether with a pulse oximeter or with your watch, can lead to increased anxiety, exacerbate stress and, unfortunately, may increase breathing rates further potentially putting a strain on yourself, and your body.

Doctors recommend that if a person suspects they’re having breathing or oxygen problems to contact their doctor, call 911 or visit their local urgent care clinic or hospital.