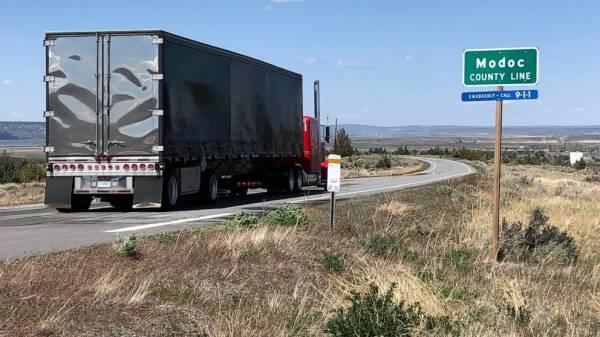 ALTURAS, Calif. —
At the Brass Rail, two neon signs were beaming “OPEN” Friday, as the town and county slowly hummed to life, the first to do so in California in defiance of Gov. Gavin Newsom’s order to stay home.

About a dozen customers were in the bar of the Basque restaurant — the only portion open so far — eager to be back among friends and neighbors after a six-week shutdown mandated by the Democratic governor 300 miles (480 kilometres) south in Sacramento.

“It’s been a long haul. We’re a small community,” said owner Jodie Larranga. “It’s not that we’ve been given permission, we’ve just had a belly full. People are fed up.”

Modoc County is a place that defies California stereotypes. It’s where semi-trailers carrying logs from the nearby lumber mill pass on the highway and where seven in 10 voted for Donald Trump in 2016. And its residents are putting their faith in local officials, not the state.

“Tex would never say it’s OK to be out in public if he didn’t truly feel it in his heart,” said Amber McCandles, 41, referring to Sheriff Tex Dowdy. He “has done a great job keeping us healthy. He shut the town down and kept us isolated, in quarantine, and kept us COVID-free.”

With no cases of coronavirus among 9,000 residents in the far northeastern part of the state and plenty of land to spread out on, county officials made the move to reopen Friday after what they said was careful planning and with stringent limits — businesses could only have half the patrons and customers must stay 6 feet (1.8 meters) apart.

Hair salons, churches, restaurants and the county’s only movie theater were also allowed to reopen.

Still, in a county so spread out that one supervisor said they were social distancing before it was even a thing, some were wary of outsiders bringing in the virus now that businesses are open.

At a general store just across the county line from Nevada, a woman who refused to be named said she wasn’t interested in talking out-of-towners and lamented that the media was “making fun of” its residents.

“Our residents were moving forward with or without us,” Heather Hardwick, deputy director of emergency services, said in an email, adding that residents needed guidelines to do it safely.

At Country Hearth Restaurant and Bakery in the small town of Cedarville, manager Janet Irene said she’s been following “the guiding light” of county officials in keeping the small eatery she’s run for 35 years closed except for takeout during the lockdown.

She was relieved to reopen it Friday morning.

“People were constantly asking to be able to sit in the restaurant and it was really, really difficult during this time to deny that. It’s like the hardest thing I’ve ever done in my life, because part of that time we had inclement weather, rain and — no snow — but cold outside,” she said.

Newsom has declined to address Modoc County’s move directly and has not responded to a demand from six other rural Northern California counties to also be allowed to reopen.

He said Friday during his daily coronavirus briefing that he is paying attention to their pleas.

“Know that and know that I’m looking forward to answering your call, addressing your anxiety, and it’s not lost on me. We’re not turning our back to those concerns,” Newsom said.

Not everyone waived off the concern about defying the governor, though.

“I’m really concerned about the governor not giving his approval,” said Irene, at the Country Hearth. “It could be that he would approve it anyway but he just has his plate full, I’m sure.”