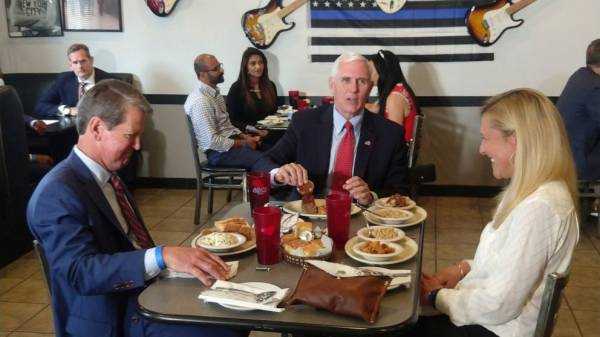 NORCROSS, Ga. —
Vice President Mike Pence traveled Friday to Georgia, where he had lunch with Gov. Brian Kemp at a cafe and praised the state — one of the first to allow businesses to start up again despite the coronavirus outbreak.

Pence and Kemp were scheduled to talk about reopening during the pandemic with members of the restaurant industry later at the headquarters of the popular Southern eatery, Waffle House.

Kemp allowed salons, restaurants, gyms and other businesses in Georgia to reopen with restrictions in April.

The Republican governor has insisted the move was guided by data and state public health officials, but it ran counter to the advice of many experts, who warned that resuming business too soon risked a fresh spike in infections.

The move also drew criticism from President Donald Trump, who said he totally disagreed with the decision after first telling Kemp he supported it.

On Friday, Pence said Georgia was “leading the way” and the country was making progress against the virus.

Waffle House resumed dine-in service on the first day Kemp allowed restaurants to do so. The popular chain is known for hash brown breakfasts and its ability to stay open in the face of natural disasters.

At a Waffle House near the company’s headquarters Friday, every other booth was closed and chairs at the counter were off limits. Four people dined inside spaced well apart, and a steady stream of customers came through to pickup food and go.

Servers and cooks wore masks, but inevitably ended up congregating close together behind the counter.

A Vietnamese restaurant and Latin restaurant in a neighboring strip mall were also open for dine-in service, but a wing shop remained closed because of the virus. A note on the door said management was hoping to reopen in two weeks but could not guarantee that due to “constantly changing news and numbers of coronavirus cases and deaths.”