Pence: Citation for small church service ‘beyond the pale’ 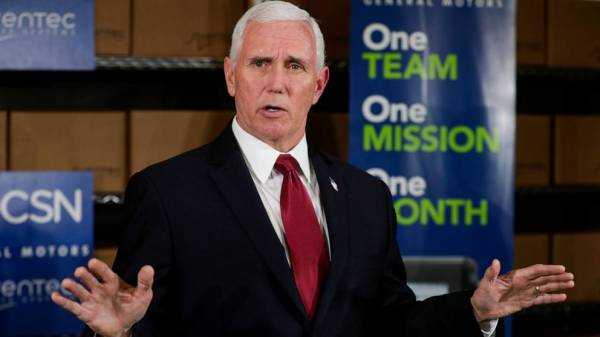 RICHMOND, Va. —
Vice President Mike Pence says it is “beyond the pale” that the pastor of a Virginia church was issued a criminal citation for having 16 people at a Palm Sunday service that authorities claim violated the state’s coronavirus restrictions.

The U.S. Department of Justice has sided with the Lighthouse Fellowship Church in Chincoteague in a lawsuit the church filed against Gov. Ralph Northam after its pastor was cited last month.

Speaking on “The Brian Kilmeade Show” on Fox News Radio on Wednesday, Pence, who heads the White House Coronavirus Task Force, said he agreed with the DOJ’s decision to file a statement of interest supporting the church.

“Look, even in the midst of a national emergency, every American enjoys our cherished liberties, including the freedom of religion,” Pence said.

“The very idea that the Commonwealth of Virginia would sanction a church for having 16 people come to a Palm Sunday service, when I think the church actually seats about 250, was just beyond the pale, and I’m truly grateful for Attorney General William Barr standing by religious liberty,” Pence said.

The federal lawsuit alleges the church’s pastor, Kevin Wilson, was issued a criminal citation because he held a service with 16 people on April 5.

The Justice Department’s filing, citing the lawsuit, says the church had maintained social distancing and had extensive sanitizing of common surfaces. The church said attendees had to stay 6 feet apart and use hand sanitizer before entering the building.

Authorities allege the church violated the state’s ban on gatherings of more than 10 people.

The state was expected to file a legal brief in the lawsuit on Thursday.