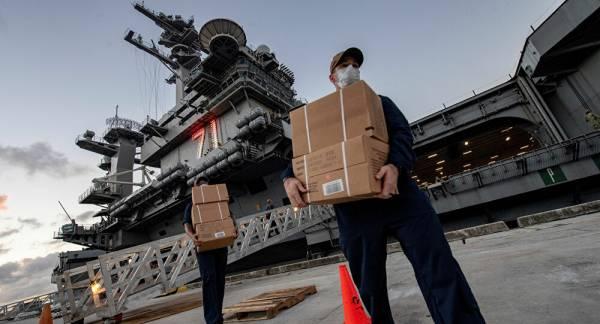 The Nimitz-class aircraft carrier became the center of media attention over the controversial firing of its commanding officer after he attempted to warn his superior officers about the skyrocketing COVID-19 infection rates aboard his ship. Now, scientists say there’s another reason to take a closer look at the viral situation aboard the vessel.

The coronavirus outbreak aboard the USS Theodore Roosevelt has given epidemiologists a unique opportunity to study how the virus behaves in a closed, tightly-knit environment consisting of mostly young, healthy adults, Popular Mechanics has reported, citing Navy data.

As of the middle of last week, the Navy reported that some 777 members of the carrier’s 4,800-person crew have tested positive for the novel coronavirus since the first case was reported on March 22, with one crewmember reported succumbing to COVID-19-related complications last week.

At the same time, the Navy’s request for a thousand crew members to submit swabs and blood tests to help “connect the dots” on transmission could help epidemiologists better understand how the virus is spread, and how long an immunity may take to develop.

Speaking to the Washington Post, UCLA professor of epidemiology and medicine Timothy Brewer said the USS Theodore Roosevelt’s confined spaces and accounting for where sailors are at all times could help give scientists a better idea of exactly how transmission is facilitated and hence, how it can be reduced if the findings can be extrapolated to the outside world.

“The more and exact data you have, the better you can interpret it and come up with conclusions,” Dr. Brewer stressed.

The Navy expects its testing to take place over the space of a week, with the light medical probing accompanied by questionnaires on sailors’ living conditions and any potential symptoms they may have.

Sputnik ScreenshotCrew members of the US Navy aircraft carrier USS Theodore Roosevelt cheer as their former commander, Capt. Brett Cozier, departs the ship after being removed by Navy staff

Another potential boon coming from systematic testing of the sailors aboard the USS Theodore Roosevelt are any revelations it may have regarding just how widespread the virus actually is.

Last week, antibody testing by researchers from the University of Southern California and the Los Angeles Country Department of Public Health discovered that coronavirus infections may be far more widespread than previously estimated, a conclusion which, if extrapolated, could mean that fatality rates are far lower than previously feared.

According to data obtained from drive-thru antibody testing carried out between April 10-11 across six LA Country locations, approximately 4.1 percent of the adult population may have an antibody to the virus (i.e. a protein in the blood produced in response to the pathogen). According to the data, when accounting for the statistical margin of error, between 221,000 to 442,000 adults in LA County may have already been infected – an infection rate that’s about 28 to 55 times higher than the mere 8,000 or so confirmed COVID-19 cases reported at the time the study was done.

Previous : The Great Space Escape: Scientists Learn How Light Can Flee From Black Hole ‘Like a Boomerang’
Next : Russian Scientists Prove Life Can Survive on Mars, Venus, Jupiter’s Ice Moon