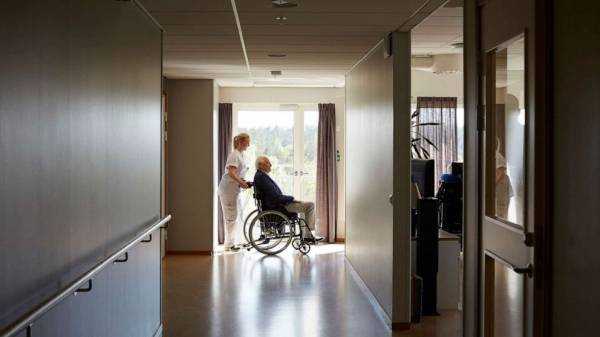 As new statistics show nursing home outbreaks accounting for more than half of the novel coronavirus deaths in some states, the industry is asking the Trump administration for $10 billion to help their facilities stay afloat financially, and to support desperately needed staffing and protective equipment.

“What we need now is to rally around nursing homes and assisted living communities the same way the public health sector has around hospitals,” wrote Mark Parkinson, the president of the American Health Care Association, in a letter sent to Secretary of Health and Human Service Alex Azar.

“It is not too late to make an enormous difference in the outcome of the COVID-19 battle in America’s long term care facilities,” Parkinson wrote. “The best public health policy is to focus where the battle is taking place, which is now most prevalent in nursing homes and assisted living communities across the country.”

The elderly residents of nursing facilities have been dying in staggering numbers. The nationwide figure of 10,000 nursing home deaths, calculated by ABC News just last week from the reporting of 28 states, appears to already be well out of date.

MORE: With millions out of work, nursing homes under siege from coronavirus plead for more staff

The exact figure remains difficult to track because the federal government does not report it, despite the Centers for Medicare and Medicaid Services, led by Administrator Seema Verma, announcing last month that they would begin keeping a national tally.

The outbreak has hit nursing facilities hard, especially in New England where coronavirus has been most aggressive and nursing homes have shown to bare the biggest brunt of fatalities. Some 60% of the coronavirus deaths in Massachusetts occurred in nursing facilities, and 70% of those who died in neighboring Rhode Island and New Hampshire perished in long term care homes, according to figures released by those states Wednesday.

“We have been calling for more than a month for infection and death data to be made available, and Administrator Verma’s unwillingness to commit to a timeline to publicly release this data means the Trump administration is failing seniors, their families, and the public health response to COVID-19,” Wyden and Casey said in a statement. “There have been no signs that the Trump administration has an effective plan to address the tragedy that is taking place in America’s nursing homes.”

CMS did not reply to request for comment for this report Wednesday. In a previous interview with ABC News, Verma said she was proud of the efforts her agency has made to protect nursing home residents.

“I think the federal government has had a very strong response,” Verma said in April. “And I’m proud of the hard work of my team that’s been working day and night to make sure that regulations were updated, that we gave flexibility to the nursing homes to support their efforts during this very difficult time.”

Congress provided some aid to nursing homes as part of the $2 trillion coronavirus relief package passed in March, including $200 million allocated to CMS to assist the agency with infection prevention in the homes. The stimulus also allocated $100 billion to provide assistance to health care facilities, for which nursing homes must compete with hospitals and other facilities. HHS is responsible for overseeing the disbursement of those funds.

But still, the nursing care industry has called for a dramatic increase in federal support. Speaking to reporters earlier this week, Mark Gloth, the medical director for HCR Manorcare, one of the largest national nursing care chains with 25,000 residents, said the needs are substantial for both testing and equipment.

Parkinson’s request to the administration is for enough funding to implement testing for all residents and nursing home staff, regardless of whether they’re showing symptoms. The Centers for Disease Control and Prevention recently changed its testing guidelines to place a higher priority on those living in nursing home facilities, but has not yet made universal testing a requirement.

Health officials in a number of states have argued that universal testing is a crucial step because without these tests, it is impossible to know which residents to isolate. Gloth said up to 70% of nursing care workers in Manorcare facilities who tested positive were completely asymptomatic. And in some facilities where universal testing has occurred, he said as many as 50% were not yet showing such telltale symptoms as cough or fever.

This week, 82 Democratic members of Congress sent a separate letter to Azar and Verma urging them to allocate additional funds from a separate tranche of money allocated primarily to assist small businesses in the most recent coronavirus relief legislation directly to tests for long term care facilities.

“We cannot successfully slow, contain, and mitigate the spread of the coronavirus in long-term care settings unless we implement a testing strategy that reaches older Americans, individuals with disabilities, veterans, and all those living in nursing homes and congregate living settings, alongside the dedicated workers who care for them,” the lawmakers wrote.

The letter also echoed the need for additional funding to support staffing and PPE shortages facing many nursing facilities.

The Department of Health and Human Services did not immediately reply to request for comment on Parkinson’s letter or the letter from House Democrats.

Combating these devastating numbers requires aid, according to Parkinson, if the homes are to have a hope of turning the corner.

“Without adequate funding, testing and supplies, long term care facilities will not be able to overcome this unprecedented health crisis and protect our residents and caregivers,” Parkinson wrote.