Not just a Trump-touted ‘cure’: Monoclonal antibodies may be ‘bridge’ to coronavirus vaccine 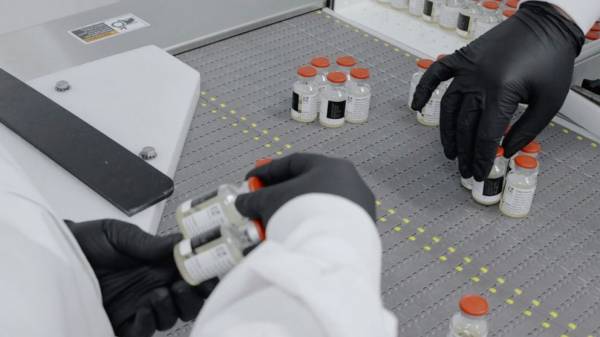 Antibody medicines like the one that earned President Donald Trump’s praise after treatment earlier this month are not just for COVID-19. For the past 30 years, this type of medicine has been used to treat cancers, inflammatory diseases and infections. Although experts say this type of medicine could be a game-changer for COVID-19, they are not a “cure,” as the president has sometimes touted, nor are they intended to replace a vaccine.

Antibodies are our natural response to an infection. They can be harvested from the blood of recovered patients, or — using modern technology — manufactured synthetically in a lab.

The idea to use antibodies as medical treatment dates back as early as the 1890s when Emil von Behring successfully treated children suffering from a severe bacterial infection called diphtheria using antibody-containing serum from the blood of horses recently exposed to the same bacteria. The discovery earned him the first Nobel Prize in medicine.

Nearly a century later, scientists Georges J.F. Köhler and César Milstein learned to engineer cells that produced many copies of a single antibody that could be used to treat disease in the 1970s. These drugs, known as monoclonal antibodies, use a concentrated, high number of identical antibodies to attack a very specific target.

“Antibodies form some of the most important medicines in the world for treating anything from cancer to autoimmune disease,” said Dr. Eline Luning Prak, a professor of pathology at the University of Pennsylvania.

The drugs, sometimes referred to as “biologics,” treat a diverse variety of diseases — ranging from cancer to eczema to certain types of arthritis. Humira, the brand-name version of a drug called adalimumab, was the world’s bestselling drug in 2018, bringing in $19.9 billion in sales revenue for drugmaker AbbVie.

When it comes to COVID-19, antibody drugs — all of which are still experimental and not yet proven to work — block the virus’s ability to attach to the body’s cells and infect them. Companies like Regeneron, Eli Lilly and AstraZeneca are currently in late-stage trials.

“These antibodies have been engineered to bind to very specific sites on the spike protein of SARS-CoV-2,” explained Dr. Thomas Campbell, a physician at the University of Colorado School of Medicine, who is leading the Colorado site for Regeneron’s COVID-19 antibody treatment trials.

“It’s a way of giving you rapid protection when you’re already in trouble,” said Prak. The drugs are designed to protect patients already infected when there is not enough time for the body to make its own immune response.

Monoclonal antibody drugs are not the same as convalescent plasma — another high-profile experimental COVID-19 treatment. However, the treatments are similar, with both providing a shortcut to achieving the body’s natural defense to a foreign invader — a concept called passive immunity.

Convalescent plasma is “a mixture of hundreds or thousands of different antibodies” that target multiple sites on the virus, according to Prak. Monoclonal antibody treatments have a high concentration of a single, specific antibody, making the drug more potent than convalescent plasma.

These treatments, which are used for a wide range of illnesses, are not without risk. Depending on where in the body the antibodies bind, the drugs can produce different effects. The pharmaceutical company Genentech, for example, removed efalizumab, originally approved to treat psoriasis, from the U.S. market because it was associated with a risk of fatal brain infections in 2009.

Another company, Janssen, stopped making a synthetic antibody drug in 2010 partly due to severe side effects — some of which were potentially fatal.

Although synthetic antibodies are currently being tested as a way to prevent COVID-19, in addition to treating the disease, researchers don’t yet know if this type of drug can fend off the virus. And they say that even if it works, the protection will likely only last a short time.

“If they only last several weeks to a month, then they’re probably not going to be protective in six months or a year,” explained Campbell.

Alternatively, vaccines teach the body to recognize foreign invaders, such as the new coronavirus, and give the body longer-lasting immunity.

But experts say monoclonal antibodies could be a “bridge” to a vaccine and work in tandem with one to control the pandemic.

“The people who are most at risk for COVID are the ones who might mount rather poor vaccine responses,” said Prak. “So, it’s in that population where this kind of therapy could be very useful.”

Previous : What to know about poll watchers in the 2020 election
Next : Street Artist Banksy Appears to Claim Ownership of Nottingham ‘Hula-Hooping Girl’