No bread flour? No problem 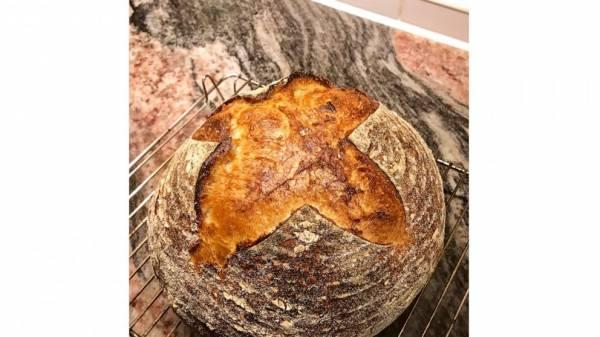 LONDON —
Are you struggling to find bread flour and fresh yeast at the moment? If so, you’re not alone.

With millions of people across the globe stuck at home due to lockdown measures imposed during the coronavirus pandemic, many people are choosing to make their own bread, rather than venturing to the local store to buy their weekly fix.

But how does one make a loaf a bakery when yeast and bread flour seem as precious and rare as gold dust?

The first option to consider, if you have a stash of bread flour but only a small amount of yeast, is a slow-rise loaf. This needs less than quarter of a teaspoon of instant dried yeast to make a stunning offering.

Ken Forkish’s white bread with 80% biga recipe, from his 2012 book “Flour, Water, Salt, Yeast,” is perfect for these testing times. It uses a mixture of flour, warm water and a tiny sprinkling of dried yeast as a 14-hour pre-fermented base for a larger loaf, which is bound to impress your family.

It’s worth noting that Forkish’s recipes use all-purpose flour, rather than bread flour, meaning that — hopefully — you might be able to locate supplies online or in grocery stores.

If your search for both bread and all-purpose flour proves fruitless but you have yeast at hand, Chris Young — the co-ordinator of England’s Real Bread Campaign, which champions independent bakeries across the United Kingdom — has posted a recipe online which uses plain flour — roughly equivalent to pastry flour in the United States.

“It has less protein than bread flour, but a combination of more water and a longer rising time than home bakers might be used to makes the most of it for great results,” says Young, adding: ”Even if your first loaves aren’t pretty, they’ll still taste delicious and, like everything, you’ll get better with experience.”

Rather than kneading the dough, Young promotes the “stretch and fold” technique, whereby flour, water and a small amount of yeast are mixed together in a bowl and then, once every hour, the home baker lifts one section of the dough at a time and folds it over to the opposite side. This is a more delicate technique than pounding the mixture on a kitchen surface and allows the carbon dioxide created by the yeast to remain in the loaf, creating more air bubbles and making the final product less dense.

Finally, if you’re out of both instant dry yeast and all-purpose flour, French baker Richard Bertinet has some handy hints about sourdough — a method which dispenses with shop-bought yeast entirely in favor of a natural fermenting “starter” — made solely of flour and water.

While whole-wheat or rye flour are preferable to create a starter, Bertinet says that you can use anything you have in your cupboard — just mix equal quantities of flour and warm water in a container, store in a warm place and repeat the process every day for around five days, until the mixture is bubbling and full of life.

The main point? Don’t be intimidated by people who try to complicate the process.

“Sourdough is not a bread, it’s a way of using a different type of yeast. It’s a slow process — that’s all it is. It’s become a fashion thing, which I despise. It’s not. It’s a way of baking. You need to simplify it in your head a bit more,” explains the baker.

Instead of constructing the loaf using the stretch-and-fold technique, Bertinet recommends his own “slap and fold” method, where the dough is lifted into the air, slammed down onto the workbench, then folded over itself — strengthening gluten bonds in the flour and increasing air in the finished loaf. The secret, again, is plenty of water and a long, slow fermentation.

All three bakers encourage people to continue supporting and ordering from their local bakeries during the pandemic. But in the meantime, Bertinet says, “If you’ve got some flour — you can do something with it.”

Previous : Can I get the coronavirus from my pet?
Next : Rocco DiSpirito shares versatile Italian baked eggs recipe