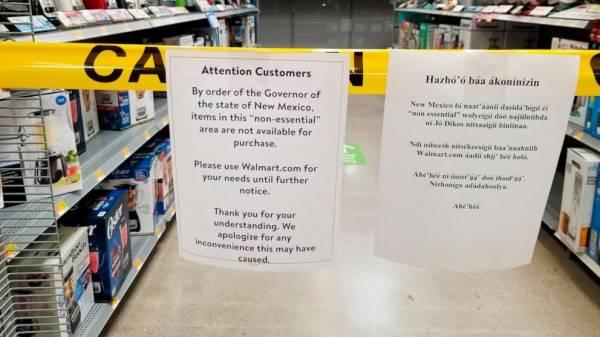 SANTA FE, N.M. —
A modern-day trading post on the southern outskirts of the Navajo Nation was on lockdown over the weekend under the watch of National Guard troops and state police to discourage nonessential travel and commerce as local coronavirus infections soar.

Invoking provisions of the state Riot Control Act, New Mexico Gov. Michelle Lujan Grisham ordered residents of Gallup to remain home except for emergencies and blocked roads leading in and out of town to nonessential travel and any vehicles carrying more than two people.

The restrictions were welcomed by local and state officials who have watched COVID-19 infections spread to nursing homes and homeless populations as well as overwhelm hospital intensive care units, leading coronavirus patients to be transferred to Albuquerque.

Some visitors were caught off guard as they traveled from the Navajo Nation to stack up on supplies, only to find entire sections of the Gallup Walmart cordoned off as sales were restricted to food and other essential commodities.

“They didn’t tell us on the radio or anything,” said Patrick Sandoval of Ganado, Arizona, who came in search of food, games, baby wipes and other items for his family and neighbors. “You don’t find out until you get in there that it’s just essential items.”

Despite restrictions, lines of shoppers outside Walmart stretched for hundreds of yards (meters) on Friday afternoon. Stores have been ordered to close under emergency provisions that expire at noon Monday and can be extended by order of the governor.

Gallup is a hub for basic household supplies, liquor sales and water-container refills for people living in remote stretches of the Navajo Nation — often without full indoor plumbing — and indigenous Zuni Pueblo. The Navajo Nation has imposed evening and weekend curfews on the reservation spanning parts of New Mexico, Arizona and Utah.

State Sen. George Munoz, D-Gallup, said the flow of visitors had gotten out of hand with little regard to state social distancing mandates, as federal stimulus checks arrived in March. He believes the crackdown had strong public support in Gallup.

COVID-19 infections in Gallup and surrounding McKinley County surpassed 1,060 confirmed cases on Friday and account for 30% of cases stateside, surpassing infections in much larger communities such as Albuquerque. In all, more than 3,500 cases have been reported in New Mexico, with more than 130 deaths.

Federal health officials have linked the severity of the problem in Gallup to an early outbreak at a detox center that was followed by infections among homeless people and nursing homes.

Homeless residents who contracted COVID-19 were being offered temporary shelter at four motels at the expense of the state to isolate them and slow the spread of the virus.

Lujan Grisham is holding fast to business restrictions and social distancing mandates until at least May 15 in the northwest of the state, including large portions of the Navajo Nation, where infections are surging.

She eased some restrictions Friday on nonessential businesses that can provide curbside service and allowed the reopening of gun shops and veterinary offices. Elective surgeries and procedures were reinstated at hospitals that resorted to furloughs and staff reductions as income from traditional sources plummeted.

City officials in Gallup requested the new state of emergency under the riot act that can prohibit people from walking the streets and using certain roads. Violations are punishable as misdemeanors on a first offense and as a felony on the second offense. Emergency declarations under the act expire after three days and can be renewed.

To the east, a pawn shop in Grants has been notified of a possible $60,000 fine for remaining open in defiance of a statewide public health order that restricted nonessential business operations.

That city of 9,000 has become a flashpoint of political conflict after Mayor Martin Hicks urged all businesses to reopen against the governor’s orders and advice from nearby Acoma Pueblo.

Previous : Naples’ beloved pizza is back after virus shutdown eases
Next : Why are so many COVID-19 patients also seeing blood clots?