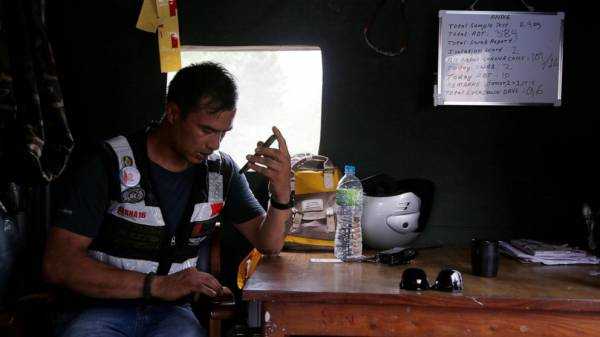 BHAKTAPUR, Nepal —
When the new mother died in the hospital last month — the first person to succumb to COVID-19 in Nepal — her days-old baby was moved to an isolation ward.

But the woman’s body remained. Ambulance drivers and hospital workers, fearful of the contagion, refused to move the corpse from the hospital morgue to the crematorium, where it could be burned in keeping with Hindu tradition.

And so authorities called upon RNA-16 — three men and a woman in signature blue vests, renowned for their selfless volunteer work in Bhaktapur, a UNESCO world heritage site known as the “city of temples” just east of the capital, Kathmandu.

RNA-16 stands for “Rescue and Awareness” and the 16 kinds of disasters they have prepared to deal with, from Nepal’s devastating 2015 earthquake to road accidents. But their unique services in the epidemic amount to a much greater sacrifice, said doctors, hospital officials and civic leaders.

“They are truly our heroes and doing work that no one is willing to do. When even health workers are scared, they have dared to help people in the pandemic,” said Kiran Thapa, a city council member.

They have received financial support from businesses, and have been lauded by doctors and civic leaders for aiding a health care system ill-equipped for the pandemic.

Since Nepal reported its first cases, the team has been camping in a tent pitched on the roof of a hospital pharmacy in Bhaktapur.

“As soon as the lockdown was declared, we decided to camp here and help out because we were expecting a big flow of people coming in for tests,” team leader Arun Sainju told The Associated Press from their leaky tent.

Sainju, 31, is a safety instructor at a school. He formed the team in the aftermath of the 2015 earthquake. Sick with a high fever, he left his hospital bed to help the overwhelmed staff.

“I was separating the dead bodies from the wounded ones and categorizing them for the doctors,” Sainju said. “This is when my life turned, and I decided to help people.”

Nhuja Kaiju, 20, is a computer operator at a government office, and Rajesh Gaiju, 28, is a history and culture teacher. Only Punam Karmacharya, a 22-year-old nurse, has any formal medical training.

As the virus raged in neighboring China earlier this year, the team trained with the Nepalese army to better prepare for the pandemic, including how to handle viral samples and infected bodies.

And when most of the city’s first responders refused to transport suspected COVID-19 patients, RNA-16 converted a borrowed truck into a makeshift ambulance and started fielding calls from around Bhaktapur and surrounding villages to pick people up for virus tests.

Apart from the tent they sleep in, they set up two tents within the hospital grounds where they and hospital nurses collect virus test samples. Up to 80 people come to the hospital for tests daily. The volunteers help them line up, collect information and take their samples.

Then last month, they were deployed after the young mother’s death.

“When we reached the morgue, there was blood spattered all over the floor and the body was also not properly wrapped. We had to repack the body in a body bag, lift it in the vehicle and drive it to the Pashupati temple for cremation,” Sainju said.

Even at the crematorium, the staff would not go near the body, so the team loaded it into the furnace while the family stood at a distance. RNA-16, said Sainju, had become “the funeral procession for the lady.”

Afterward, they quarantined themselves for 11 days, during which Sainju felt constant anxiety.

His concern: In their absence, people in need of help were suffering.

While nonstop news about the effects of the coronavirus has become commonplace, so, too, are tales of the kindness. “One Good Thing” is a series of AP stories focusing on glimmers of joy and benevolence in a dark time. Read the series here: https://apnews.com/OneGoodThing