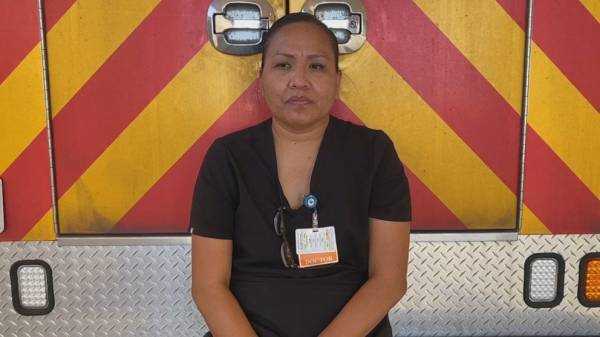 COVID-19 is surging through the Navajo community, which is suffering one of the highest infection rates per capita in the country. And the peak is still weeks away.

Dr. Sriram Shamasunder, co-founder of the HEAL Initiative at the University of California San Francisco, has been practicing emergency medicine from the back of a car. He’s there with a team of UCSF nurses and doctors helping the Navajo COVID-19 response team on the ground. The care this team can provide is extremely limited.

“[The] native population [is] similar to vulnerable patients all over the country, whether black or Latinx population… They are more susceptible,” Shamasunder told “Nightline.” “New Mexico Native Americans only make up 5% of the population but they make up 20% of COVID-positive [patients].”

Shamasunder has teamed up with locals like the COPE program’s Nitumigaabow Champagne. They’ve been doing rounds at a motel in Gallup, New Mexico, where the unsheltered and the sick can go to get off the street and away from extended families.

Most of the burden of caring for the sick in their community falls on the fellow Navajo. Historically, the U.S. government hasn’t helped much, breaking dozens of promises with Native American tribes for centuries, dating far past Johnson v. M’Intosh in 1823.

Congress has approved $8 billion for tribal assistance for COVID-19 relief, but that money has to be split among 574 tribes. Tribal governments say the money still hasn’t arrived yet.

“Sometimes it goes through the federal agencies before it gets to the tribe, or through the states. We have been using the same process and wait. And you have to submit for the funding… But the need is now,” Navajo President Jonathan Nez told “Nightline.”

An estimated 30% of people who live on the Navajo reservations do not have access to running water, and turn to outdoor pumps to get their supply. It makes it that much more difficult to fulfill the constant handwashing necessary during the COVID-19 pandemic.

“Nightline” met with a man named Elmer at one of these pumps in Thoreau, New Mexico, who was there to get water.

“For little children to wash up daily, to have them clean daily, is a problem… They love to play outdoors and to keep them clean is hard, because they love the outdoors and play in the dirt,” he said.

Former Navajo Attorney General Ethel Branch launched a crowdfunding campaign to help distribute food and water to the most vulnerable in her community. Branch is part of a larger grassroots effort to provide essential needs to the community.

“There are only 13 grocery stores available for my people,” she said.

Klee Benally is one of the group’s organizers. He’s been setting up the handwashing stations and distributing them around the reservation.

“It’s just one fix to address the hygiene issue,” Benally said. “[We] don’t wait until people are sick because the conditions that are making people sick and more at risk are right on this street.”

The Navajo Nation is larger than West Virginia, but its population of about 300,000 has access to only about 20 intensive care unit beds.

The Indian Health Service says it’s had to build additional temporary hospital beds to prepare for predictions of 200 additional patients a day and over 100 ICU-level patients across the area.

Dr. Michelle Tom grew up under the shadow of Chimney Butte, Arizona — also without running water.

She’s now the only Navajo emergency physician at her urgent care clinic in Winslow, Arizona.

At the urgent care facility, patients pull up and they’re intubated even though it’s not technically an ICU or hospital. If their condition is critical, the only way to save their lives is to get a helicopter. But after that, Tom says, she doesn’t know what happens to the patients.

“We don’t know. We don’t have access to them anymore. And that’s where the disconnect is,” Tom told “Nightline. “That’s where the hard part of this for us, especially for me… Everyone knows everyone… We all know who’s not doing so well. And as soon as they leave that chopper, they’re no longer in our hands.”

Tom says the closest ICU facility where she can send patients is at least one hour away by chopper or up to three hours in an ambulance.

Growing up, Tom says she never saw a medical professional like herself.

“I never saw another Navajo as a nurse or a doctor,” she said. “You know, sometimes there’s a disconnect when language and cultures are not meeting. And we know that just by studies and even by experience, you’re not going to have the best health care.”

That’s not from a lack of effort. Tom is handling an alarming number of presumptive cases.

“I was doing car triage yesterday and I would say we had about 15 cars, you know, and … just me on my shift in the car triage,” she said. “That’s not counting [the local] medical center, who is an E.R. That’s not counting ones that bypassed me to go to urgent care. These are presumptive cases.”

Multigenerational households are a factor in the spread, Tom said.

“That’s part of our origins studies. That’s where we are as a people, that our community comes first… These are our neighbors. These are our relatives; our brothers and sisters. So when we’re telling them to go home and isolate, they’re isolating with eight people. And that’s even for myself.”

Tom left her family and moved to an apartment an hour away to try to minimize the risk of infecting the group of people she’s trying to save.

“My job is immensely hard because I have such a connection to my people and to my land,” she said. “Our elders, our teachers … protectors. They hold all the key elements that we need to have a strong sense of identity.”

Previous : California governor says some business may reopen this week
Next : Carnival Cruise Line plans to resume some operations in August