Malls, movies and more: A look at reopenings by state in US 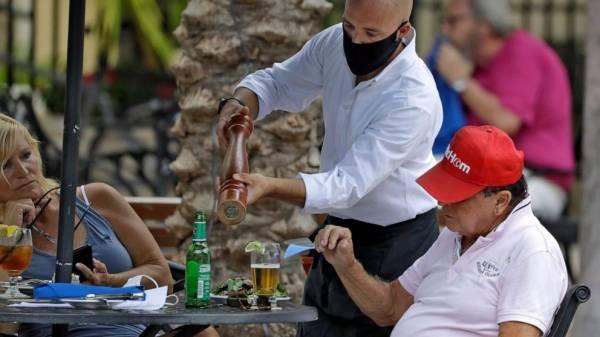 The reopening of the economy and loosening of coronavirus-prompted restrictions remain uneven and varied throughout the U.S. as governors watch case numbers and weigh caution against desires to ramp up business in their states.

Texas, Oklahoma, and Montana are among those newly allowing restaurants to reopen. Malls, movie theaters and other venues are reopening in several states. Some states have outlined phased reopenings – North Carolina’s governor said he hopes to start such a process after this week if virus trends allow.

Some states, including epicenter New York, are moving more slowly, with restrictions in place at least until May 15. In California, some counties have announced their reopening in defiance of an ongoing stay-home order.

And some states never issued stay-home orders at all.

Here is a look at where states stand on reopening.

FLORIDA: Restaurants and shops could reopen at limited capacity Monday across Florida, except for three hard-hit counties. State parks reopened with social distancing rules. Gyms and salons remain closed. Schools will stay closed for the rest of this school year.

TENNESSEE: After allowing many restaurants and retail stores to reopen last week, salons and other close-contact stores will be allowed to resume Wednesday. The state has released guidelines on safely reopening, but officials acknowledge Tennessee won’t enforce such measures.

OKLAHOMA: Restaurant dining rooms, bars serving food, gyms and churches began welcoming back customers last week under social distancing and sanitation guidelines, following the earlier reopening of barbers and hair and nail salons. Employees, including church staff, are required to wear masks. Church daycares are not yet allowed to open.

MONTANA: Restaurants, bars and casinos began reopening Monday with increased sanitizing, limited crowds and servers donning masks. Churches and retailers opened last week, and a stay-home order was lifted except for vulnerable populations including the elderly. Democratic Gov. Steve Bullock is allowing schools to reopen Thursday, but many districts already canceled in-person classes for the year.

UTAH: Restaurants, gyms, barbers and nail salons began reopening Friday. Distancing and mask requirements were in place for employees and some customers in urban Salt Lake County. Schools are closed for the academic year. Republican Gov. Gary Herbert has said churches will likely be among the last places to reopen.

MICHIGAN: Construction, real estate and more outdoor work can resume Thursday under Democratic Gov. Gretchen Whitmer’s latest order. Many businesses will remain closed, including casinos, bars and gyms. Restaurants are limited to pickup and delivery. Schools are closed for the academic year except for distance learning. Though auto plants haven’t reopened, automakers and unions are in talks about restarting.

KENTUCKY: Health clinics, dentists and optometrists have reopened. Next Monday, Democratic Gov. Andy Beshear is also allowing broad resumption of manufacturing and construction work, along with horse racing at Churchill Downs without spectators. Restrictions on car dealers and pet groomers also lift next week. Later in May, he plans to reopen more retailers and let churches resume in-person worship.

NORTH CAROLINA: The stay-home order, including business restrictions, remains until Friday, after which Democratic Gov. Roy Cooper hopes to begin a phased reopening. He said Monday that decisions on the pace of reopening depend on key metrics including trends in positive cases and hospitalizations.

WYOMING: Starting May 1, some businesses — barbershops, cosmetologists and tattoo parlors — were allowed to reopen. Only one jurisdiction, Teton County, which includes the Jackson Hole tourist enclave, enacted a stay-home order, which is now lifted. Other counties seek more lenient restrictions that could allow outdoor restaurant dining. Schools remain closed.

NEBRASKA: Republican Gov. Pete Ricketts loosened restrictions Monday in most of the state, allowing salons, tattoo parlors and dine-in restaurants to reopen with limited capacity. Restaurant employees must wear masks. Day cares will be allowed to have up to 15 children per room. The loosened restrictions will be expanded to 10 more counties on May 11.

IOWA: After loosening business restrictions across most counties, Republican Gov. Kim Reynolds said Monday that virus trends will dictate how soon she does the same in the remaining counties, which include urban areas. Church services have been allowed to resume statewide.

CALIFORNIA: Three Northern California counties have reopened in defiance of Democratic Gov. Gavin Newsom’s ongoing order to stay home. Two counties north of Sacramento reopened Monday with social distancing in place and restrictions on how many customers could be in businesses and restaurants. They followed the step taken Friday by a rural county in far Northern California. There are other pockets of resistance throughout California, with restaurants and hair salons now operating after a month of forced closure. Some are flouting recommendations to stay separated entirely.

NEW YORK: The statewide shutdown order expires May 15. After that, while New York City is the epicenter of the outbreak in the U.S., Democratic Gov. Andrew Cuomo has proposed letting some less-affected upstate regions begin phased reopening once they’ve met criteria key virus markers. Some upstate hospitals have been allowed to resume elective surgeries, but they must maintain a certain threshold of open beds for emergencies. Schools are closed through the academic year.

ILLINOIS: The stay-home order lasts through May 30, and with it, schools remain on remote-learning status and nonessential businesses are closed. But as of May 1, nonessential businesses could fill phone and online orders. Some nonelective surgeries may resume, and many state parks are open for hiking and fishing. Face-coverings are mandatory for public places where social distance can’t be maintained.

WISCONSIN: The stay-home order runs until May 26, but Republican legislative leaders are pressuring Democratic Gov. Tony Evers to reopen faster. Republicans also are asking the state Supreme Court to block the latest order and force Evers’ administration to bring lawmakers into the decision-making. Evers’ phased reopening plan requires 14-day improvements in certain key virus trends that have not been met.

Previous : Three Indian Security Personnel, One Terrorist Killed After Clash in Kashmir – Police
Next : US: Russia could try to covertly advise candidates in 2020