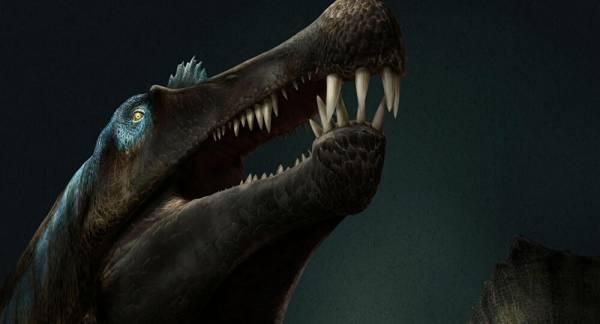 Newly published findings by a team of researchers indicate that the dinosaur Spinosaurus aegyptiacus was aquatic and quite the “river monster” when it roamed the Earth millions of years ago, according to paleontologist Nizar Ibrahim.

Led by Ibrahim, who also serves as a professor at the University of Detroit Mercy (UDM) and an explorer with National Geographic, researchers arrived at their conclusions after analyzing the tail fossils of a Spinosaurus found at the Kem Kem beds of the Moroccan Sahara.

The Spinosaurus skeleton, which was first unearthed in 2008, is considered to be the only complete skeleton of the dinosaur, as other specimens were lost when air raids on Munich, Germany, by the Allied forces destroyed the building that housed the remains during World War II.

With crucial fossils having been destroyed, much of the Spinosaurus’ history remained a mystery to researchers until the 2008 discovery, and later the unearthing of the additional tail bones in 2015.

“This discovery really opens our eyes to this whole new world of possibilities for dinosaurs,” Ibrahim said in a statement accompanying the release. “It doesn’t just add to an existing narrative, it starts a whole new narrative and drastically changes things in terms of what we know dinosaurs could actually do.”

“There’s nothing like this animal in over 220 million years of dinosaur evolution, which is pretty remarkable,” he added.

©
REUTERS / Marco Auditore, Gabriele Bindellini/Handout A reconstruction of the tail skeleton of Spinosaurus (missing bones shown in white) at top, cross sections through the tail showing changes in the vertebrae, tail volume, and arrangement of major muscles at center and the new look of Spinosaurus (black, soft parts/body outline; red, bones collected in 2008 by a local fossil collector; green, bones from recent scientific excavations; yellow, bone fragments collected in the debris around the main excavation area) at bottom are seen in an illustration provided April 29, 2020.

In an effort to make their findings sound, the team of researchers used photogrammetry to map the anatomy of the tail before study participants proceeded in making a model. Afterward, researchers attached the model to a robotic arm and placed it in water, eventually showing that the tail could move laterally and effectively create enough force to allow the Spinosaurus to transit waterways, similarly to a crocodile.

According to Nat Geo, this is the first time that such an adaptation has been reported in a dinosaur. The team’s study was published in the journal Nature on Wednesday.