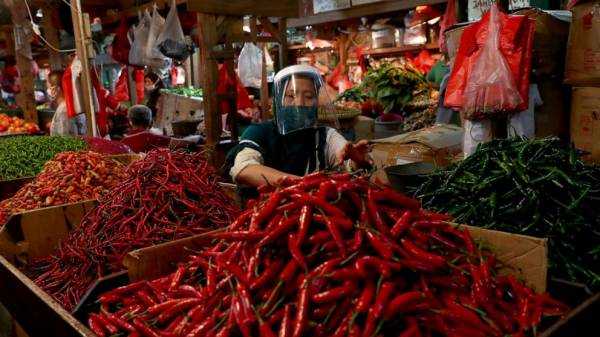 JAKARTA, Indonesia —
Eva Rahmi Salama worries that authorities in Jakarta, Indonesia’s sprawling capital, are acting too soon to lift restrictions put in place two months ago to fight the spread of the coronavirus.

Salama, who lives in Jakarta with her husband, has reason to be concerned. She saw firsthand the tremendous agony the virus can inflict when her mother and father both died from COVID-19 within two days of each other.

As Indonesia’s overall virus caseload continues to rise, Jakarta has moved to restore normalcy by lifting some restrictions this week, saying that the spread of the virus in the city of 11 million has slowed after peaking in mid-April. This has raised concerns among some, including Salama.

“It seems that people are underestimating the virus now,” she said.

Looking at Indonesia’s overall handling of the crisis, it’s easy to understand her skepticism.

While Indonesia’s neighbors scrambled early this year to try to contain the spread of the coronavirus, the government of the world’s fourth most populous nation insisted that everything was fine. Indonesia’s southern neighbor Australia and some fellow Southeast Asian countries such as Singapore took action as early as late January that included containment and tracing measures.

Indonesian President Joko Widodo acknowledged in March that his government had chosen to keep the public misinformed about the state of the coronavirus in the country. “Indeed, we did not deliver certain information to the public because we did not want to stir panic,” he said at the time.

Indonesia’s virus caseload continues to climb rapidly. On Tuesday, the government reported 1,043 new cases, a single-day high for the country, which has confirmed over 33,000 infections in all. More than 1,900 people have died from the virus in Indonesia, the highest toll in Southeast Asia.

Jakarta itself has confirmed more than 8,300 cases and at least 533 deaths, the most in Indonesia. The city had roughly 3,400 new cases in both April and May, and has reported at least 1,037 new ones so far in June.

But even though Jakarta seems to have flattened the curve of the virus, other parts of Indonesia, a vast archipelago nation of more than 270 million people, are still seeing their curves rise, due largely to people traveling to these places from the capital.

East Java province — which, like Jakarta, is on Java island — has had the second-most confirmed cases in Indonesia, at over 6,500, including more than 500 deaths, and the numbers are still rising there, according to the government’s COVID-19 Mitigation Task Force.

“People from Jakarta traveled to East Java … . That is why East Java suddenly became the next epicenter in Indonesia,” said Pratiwi Sudarmono, a microbiology professor at the University of Indonesia in Jakarta. “I am sure that after Ramadan, many people from East Java went back to Jakarta. This can cause a second wave in Jakarta.”

The Islamic holy month of Ramadan ended in late May in Indonesia, the world’s most populous Muslim-majority country.

Still, Jakarta Gov. Anies Baswedan has moved to reopen the city, which imposed large-scale social restrictions on April 10. “According to the graphs, Jakarta is starting to be under control,” he said.

Offices, restaurants and grocery stores in Jakarta reopened on Monday with only 50% of their employees and customers. Public transportation also resumed services. Last Friday, the city’s worship facilities, including mosques, were allowed to reopen at half capacity and with social-distancing requirements in place.

Some shopping centers will reopen next week, while schools will remain closed.

Many experts, however, fear that the move to reopen may be premature, and that a second wave of the virus could hit the capital.

Countries including China and South Korea, whose tracing campaigns, testing and other social initiatives are far more robust than Indonesia’s, have experienced coronavirus relapses after lifting restrictions.

“The second wave of COVID-19 potential here is high,” Sudarmono said. “This is because there is a lack of awareness and there is no clear plan.”

Agus Pambagyo, a public policy analyst, said that even though many people have been hit financially by the restrictions in Jakarta, the government should be looking at other factors and increase its testing for the virus before reopening.

“Because it is a pandemic, there should be scientific evidence” that the virus is under control, Pambagyo said.

Salama, meanwhile, remains concerned about the situation in Jakarta, with the horrific memories of what happened to her family still vivid.

Salama’s 68-year-old mother was hospitalized in Jakarta in March with typhus. She also had difficulty breathing, and was tested for the coronavirus at the family’s request.

“We were very suspicious my mother was infected by the coronavirus,” said Salama, who is 42. “But the nurses did not take it seriously.”

After testing positive for the virus, Salama’s mother was transferred to a COVID-19 hospital, where she died five days later. Salama and her two younger brothers never had a chance to say goodbye.

Two days later, the family got more tragic news: Their 70-year-old father, who had been hospitalized earlier because of a heart condition, had died on same day the family received a positive COVID-19 test result for him.

In addition to losing her parents, Salama’s 36-year-old brother also contracted the virus and was quarantined for nearly three months.

For Salama, relaxing restrictions in Jakarta has its pros and cons.

On one hand, it would allow her and her husband to continue their efforts to open a restaurant in the city after putting their plans on hold due to the virus outbreak. But she is not confident Jakarta is prepared to reopen, and worries that many people are not taking the coronavirus seriously enough.

“I want people to know that it is not easy to recover from COVID-19,” she said.