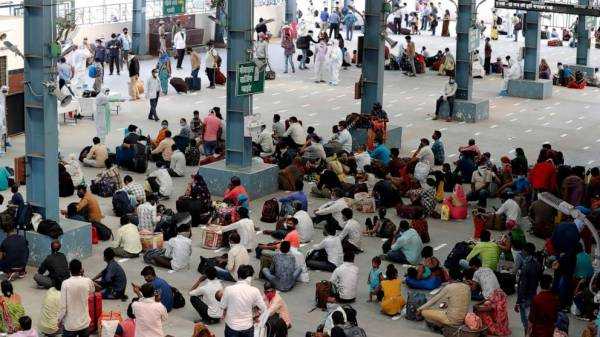 PRAYAGRAJ, India —
Thousands of jobless Indian migrant workers arrived by train in their home state on Wednesday after the government eased a lockdown imposed on March 25 to fight the coronavirus pandemic.

Two trains arrived in the northern town of Prayagraj in Uttar Pradesh state from Surat, a diamond manufacturing hub in western Gujarat state. Two more trains were to follow later in the day.

“I am very happy today that I have been able to come back home. My mother is here and she is very sick,’’ said Sunil Kumar Tripathi, a teacher.

Shalu Upadhyay, an embroiderer, said the special train service was a huge relief for the stranded workers.

The stranded workers lost their jobs under the lockdown and were living in shelters and relief camps organized by the state government and charities. After more than 50 days, the government began running special trains after workers clashed with police in Mumbai, India’s financial capital, and Surat over the past two weeks.

India’s Labor Ministry said it still doesn’t know the total number of workers stranded across the country, although it ordered a count early last month, the Press Trust of India news agency reported.

The data was sought by an activist from the Commonwealth Human Rights Initiative who said a large number of migrant workers were affected by the lockdown, causing immense economic hardship.

Previous : UK Health Minister Says No Evidence Coronavirus is Man-Made
Next : The second virus wave: How bad will it be as lockdowns ease?