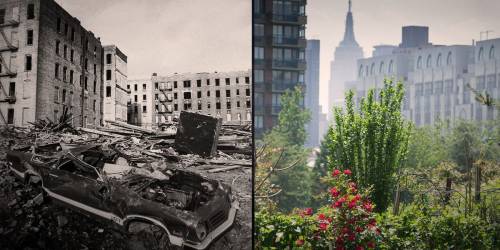 In the 1960s and 1970s, New York City faced a sharp economic decline and white flight. Buildings were abandoned or burned down, particularly in the city’s lower-income neighborhoods. Communities faced mass disinvestment — and what was left was urban decay.

It was around this time that Hattie Carthan, a 64-year-old woman living in Bedford-Stuyvesant, Brooklyn, began a grassroots effort to transform that urban decay into green space. What started with four newly planted trees in her neighborhood turned into 1,500.

Along with guerrilla gardening efforts popularized by the “seed bombs” of Lower East Side gardener Liz Christy, Hattie’s urban environmental movement paved the way for the city’s support for community gardens.

Today, around 500 community gardens line streets across New York City. But the history of how we got them — through the radical work of people like Hattie and Liz — is often overlooked. Check out the video above to learn more about their stories and how they ultimately transformed the landscape of New York City.

Today, their legacy lives on through the Hattie Carthan Community Garden and Farmers Market, the Liz Christy Community Garden, the Green Guerillas’ ongoing work, and many other urban gardens — including the South Bronx casitas — that are still thriving today.

This is the fifth and final installment in season two of Missing Chapter, where we revisit underreported and often overlooked moments of the past to give context to the present. Our first season covers stories of racial injustice, identity, and erasure. If you have an idea for a topic we should investigate in the series, send it via this form.

You can find this video and all of Vox’s videos on YouTube.