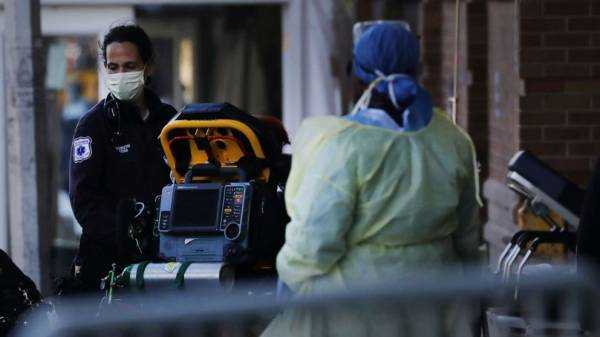 Scientists and doctors are learning more about the novel coronavirus responsible for COVID-19 with each passing week.

Doctors have now described alarming situations in which patients with COVID-19 suddenly and inexplicably become critically ill around the eighth day after being infected with the virus.

Dr. Sunny Jha, an anesthesiologist at the University of Southern California, described a 60-year-old man who initially was stable at the hospital but suddenly deteriorated and was placed on a ventilator.

“What we have seen is that people have symptoms and some start to feel better after one to two weeks, then all of a sudden get worse,” according to Dr. Mark Eisenberg, a cardiologist at NewYork-Presbyterian/Columbia. “One person, in particular, was getting better and all of a sudden became short of breath and went to a New York emergency room and while being evaluated before they were able to place a breathing tube died.”

The man was only 51 years old.

In medicine, “decompensation” is a term used to describe a phenomenon in which some patients take a sudden, sharp turn for the worse.

Among some patients with COVID-19, “we don’t know why the patients decompensate as suddenly and as rapidly as they do,” Davis said.

While doctors may be uncertain why the crash appears in the second week, they do have several theories as to what may be causing the crashes.

Dr. Danielle Davison, an associate professor of anesthesiology and critical care medicine and division director of the Intensive Care Unit at George Washington University, suggested these worsening symptoms may be just the progression of the disease itself. In the first week, the virus is sort of multiplying at the time when the patient has symptoms, she explained.

Then during the second week, she said, “the virus itself is traveling down the respiratory tree and reaching the lungs.”

But Davidson also said it’s possible the body’s immune system itself might be to blame, triggering a severe overreaction to the viral infection that results in syndrome called “cytokine storm.”

Jha floated yet another potential cause for the crash.

“The virus makes it difficult for oxygen to be transported through the blood and for exchange of oxygen and carbon dioxide to happen,” he said. “The situation leads to different organs failing and worsens the condition in the lung and leads to the crash.”

Davis agreed lack of oxygen leading to organ damage is a likely culprit.

“The virus is starving all the tissues and the other organs of oxygen. I’ve seen patients with heart attacks come in, and they have the virus and it could be that just because the heart was starved of oxygen,” he said.

The same phenomenon might also be starving the brain of oxygen, leading to neurological damage in some patients, Davis added.

In addition to decreasing the oxygen available to the body, COVID-19 can also cause blood clots. The clots can travel to a patient’s heart, causing a heart attack, or travel to their brain, causing a stroke. Both can result in a rapid crash.

MORE: Why are so many COVID-19 patients also seeing blood clots?

Separate issues like inflammation, low oxygen and blood clots resulting in decreased blood flow can each cause a crash in their own right. These issues can also work in combination to worsen health.

While it’s clear there are numerous causes of the second-week crash, doctors still can’t predict which of their patients will crash. Age may play a role, but crashes are occurring in young patients as well. Patients with underlying medical conditions such as hypertension, diabetes and obesity seem to be at higher risk.

Davison said her hospital now has a new algorithm in place to determine which patients might be good candidates for blood thinners to stave off blood clots. The hospital is also actively assessing which patients should be rotated over 24 hours in their bed positioning to help promote equal oxygen flow to all parts of the lungs.

“We’re changing things, it seems like by the hour sometimes,” she said.

Given the lingering uncertainty about this novel coronavirus and its impact on the human body, emergency room physicians are pleading with Americans to stay home to avoid the spread of this contagious disease.