Brooklyn neighborhood comes together to bury a stranger 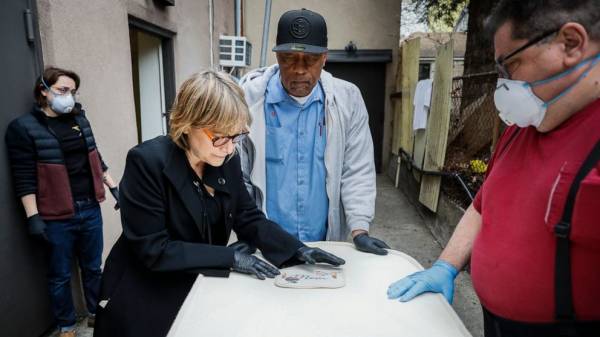 NEW YORK —
The request, posted on an online neighborhood forum by a Brooklyn funeral director, was simple but heartfelt. A 91-year-old woman had died from the coronavirus. Her family was scattered in other states. Would anyone like to contribute items for her funeral, like flowers?

This wasn’t a funeral for anyone who lived in the neighborhood, Brooklyn’s Prospect Leffert Gardens section, or for anyone that neighbors knew. It was for a complete stranger who died at a Manhattan assisted living facility.

Yet within minutes, people began to respond. One resident, Rebecca Benghiat, embroidered the word “Mom” onto a fabric nameplate that went onto the eco-friendly felt casket.

“I will contribute lilacs — our lilac bush is bursting with blooms!” another resident wrote.

“I should have some white daffodils opened by then,” wrote another.

Those modest gifts helped give a human touch to a socially distant funeral for Winifred Pardo, who was buried Wednesday at Woodlawn Cemetery in the Bronx.

Pardo’s family abided by New York’s rules barring gatherings of any size and watched the ceremony via an online chat, with video streamed by one of the funeral director’s assistants.

One of Pardo’s daughters, Beth Pardo watched from Pennsylvania. She said she was touched by the support from strangers.

“It’s such a painful time for so many people, and you know death is all around so many of us, and all of us together find community and to find connection is helping me get through it,” Pardo said. “I think it has turned what felt very stark and harsh and lonely into this beautiful thing.”

The gifts for the funeral were solicited by Amy Cunningham, who owns Fitting Tribute Funeral Services in Brooklyn.

She has been arranging burials for COVID-19 victims at a heartbreaking rate and decided to turn to her neighbors for help.

“Funerals used to be managed by neighborhoods and communities and families on their own, so why don’t I put up the message out, and so many people are at home and maybe wanting to do something helpful,” she said, recalling her decision to put up the post.

Benghiat, who offered up the embroidery for the casket, declined to take an offer of pay for her work.

“We’re incredibly lucky. We have our health and a home we can stay inside,” she said. “This has created opportunities for us to find small ways to connect with each other and support each other over the last few weeks.”

Pardo said she was devastated when she got the call from the assisted living facility that her mother had died.

Her 19-year-old daughter, Zoe Ko, said being able to join with relatives around the country for the virtual burial “helped change this from what felt like a lonely, stark experience into something very beautiful and much bigger than us.”

“It was about healing and community,” she said.

Previous : Cuomo: All New York schools to remain closed through spring
Next : How life has changed since coronavirus struck