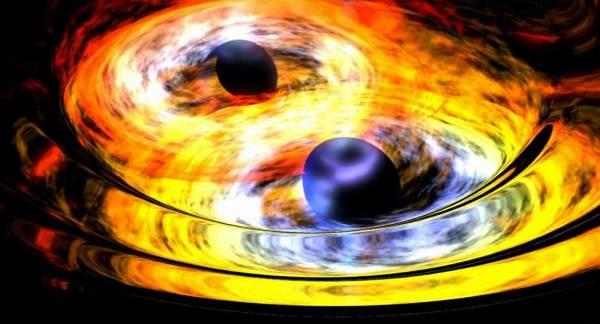 These blackholes are located in the galaxy OJ 287, which has been observed by scientists since the 19th century. OJ 287 is not an ordinary galaxy, it’s a blazar, a special type of active galactic nuclei powered by a material – gas, dust, or stars – falling onto supermassive black holes. This blazar generates relativistic jets beaming toward Earth.

Scientists at the Tata Institute of Fundamental Research in Mumbai, India have calculated when an enormous flare is released by two supermassive black holes. Their study was published in the Astrophysical Journal Letters.

This whopper of a supermassive black hole is surrounded by an accretion disc of gas and dust and is orbited by a smaller one, which in turn has a very unusual, highly tilted orbit. But when it crashes the through accretion disc it creates an enormous flare that is brighter than one trillion stars. This occurs twice during its orbit.

Observing and studying the gravitational waves produced helped scientists from the Tata Institute of Fundamental Research to predict the enormous flare produced by the two supermassive black holes to the day. It occurred on 31 July 2019 and was named after the English astronomer Sir Arthur Eddington.

There was one detail that almost torpedoed the study. Scientists almost failed to observe the flare, because back then the OJ 287 galaxy was on the opposite side of the Sun and hence out of view of all ground telescopes. However, thanks to NASA’s space-based Spitzer telescope researchers were able to prove that their prediction was right.