Allies: Ex-Detroit mayor to be released from prison early 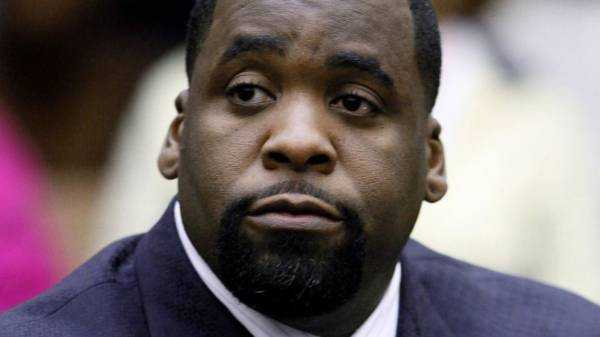 DETROIT —
Former Detroit Mayor Kwame Kilpatrick is being quarantined at a federal prison while awaiting a likely release in June, which would be years before he was scheduled to finish his 28-year sentence for corruption, a pastor said Friday.

The U.S. Bureau of Prisons declined to comment about Kilpatrick, saying only that he remains in custody at the prison in Oakdale, Louisiana. Federal prosecutors in Detroit said they had no information about the possible release.

The Rev. Keyon Payton, who has urged President Donald Trump to shorten Kilpatrick’s sentence, said Kilpatrick now is being granted relief under a federal policy that gives officials discretion to move some inmates because of the coronavirus pandemic.

“To my understanding, after a 25-day quarantine, we are expecting Mr. Kilpatrick to be released to his mother’s home in Atlanta. … We’re just elated to share the news and celebrate his home confinement. We are in constant communication with the White House,” Payton said.

It wasn’t immediately known if Kilpatrick would have to return to prison once the coronavirus threat had passed. Payton said he and other Kilpatrick allies hope Trump formally reduces the sentence to time served.

Kilpatrick, 49, was Detroit’s mayor from 2002 until 2008. In 2013, he was convicted of racketeering conspiracy, fraud, extortion and tax crimes. The government called it the “Kilpatrick enterprise,” a years-long scheme to shake down contractors and reward allies.

Kilpatrick has served only a quarter of his 28-year prison sentence. With good time credits, he’s been listed for release in 2037.

The White House declined to comment. Payton, a pastor in Pontiac, Michigan, is national director for community outreach and engagement at the Ebony Foundation, which announced the development.

The foundation is the charity arm of the company that publishes Ebony Magazine.

Owner Willard Jackson got a phone call from Kilpatrick on Thursday “to let him know he was going straight into quarantine and wanted to hold a press conference when he got out,” Ebony spokeswoman Sabrina Taylor said.

Payton said he and others gave a packet of information about Kilpatrick to a Trump aide, Ja’Ron Smith, during a January meeting in Detroit. They believe Kilpatrick’s sentence was excessive and that he deserved a commutation.

State Rep. Karen Whitsett, a Detroit Democrat, said Trump told her Thursday that Kilpatrick would be released. He was in Michigan to visit a Ford Motor Co. factory.

Under Bureau of Prisons policy, priority is supposed to be given to inmates who have served half of their sentences or inmates with 18 months or less left and who served at least 25% of their time.

Previous : What is Known About the A320 Plane Crash in Pakistan So Far
Next : VA acknowledges unproven drug Trump touted used on veterans