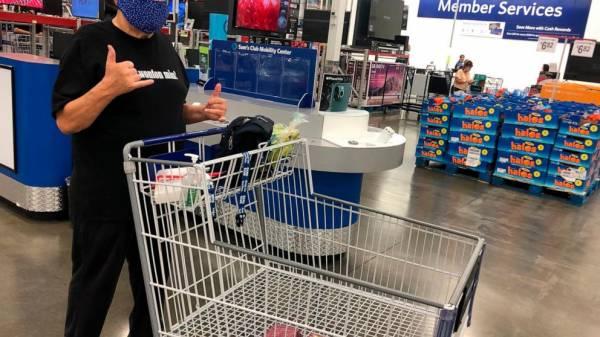 Foreheads touching, he breathes in the person’s ha, or breath.

“Face to face, eye to eye,” he explained of the custom, called honi. “It’s sharing the spirit of each other.”

That stopped, and he began adopting the bow used in some Asian cultures, when a new term emerged: social distancing.

The 6-feet-away (2-meter) rule used to curb the transmission of the coronavirus is the antithesis of tradition in Hawaii, where cultural norms revolve around intimacy — greetings with hugs, kisses and lei — and families are close-knit, Kila said.

“It’s really taking away that aloha from our culture,” said Kila, a Hawaiian cultural practitioner in Waianae, a coastal Oahu town home to one of the largest concentrations of Native Hawaiians. “It’s really sad, but we must abide by these safety rules.”

Like many people around the world, Hawaii residents are putting deeply ingrained customs and social norms on hold as stay-at-home orders and social distancing rules curb everything from European cheek-kissing to the communal sharing of mate, an herbal tea popular in some South American cultures.

In 2006, amid concerns about a virulent and deadly form of avian flu known as H5N1, Hawaii’s then-health director, Dr. Chiyome Fukino, warned that the Aloha State would have to change its ways in a pandemic.

“Here in Hawaii, we’re very touchy-feely people — we kiss each other when we say hello,” she said at the time, during a state influenza summit. “What we do know is that in a pandemic, those simple social graces will need to be set aside for a period. … Don’t kiss everybody all over the place.”

Fears of spreading the coronavirus recently forced a group of protesters made up largely of Native Hawaiians to dismantle an encampment blocking construction of a giant telescope on the Big Island.

“It’s been a real challenge for us to not greet each other warmly and not be physical. Some people still really have a hard time doing it,” said Noe Noe Wong-Wilson, considered a kupuna, or elder, and a leader in the fight against the Thirty Meter Telescope. “That’s the hardest thing for us to not greet the babies, the young children, with hugs. But we have to.”

It’s important, partly because of Hawaiians’ history, she said.

“Historically we were never able to withstand the diseases that were introduced into our community,” Wong-Wilson said of illnesses that decimated Hawaiians since Captain James Cook arrived in 1778. Cook’s crew and the Europeans who followed brought smallpox, measles and syphilis.

The new coronavirus causes mild or moderate symptoms for most people. For some, especially older adults and people with existing health problems, it can cause more severe illness or death.

Stifling physical expressions of aloha will be temporary, but is necessary, Kila and Wong-Wilson said.

Hawaii is under a statewide stay-at-home order that allows for essential activities including outdoor exercise and grocery shopping — while keeping distance. Anyone arriving in the state must undergo a mandatory 14-day self quarantine.

Wong-Wilson said protesters will return to Hawaii’s tallest mountain to continue standing in solidarity against the telescope, which they believe will desecrate sacred land, once it’s again safe to gather and practice traditional greetings.

Before the pandemic, his trips to the warehouse store were filled with handshakes and hugs. “It’s just part of my Sam’s Club day,” he said. “I just walk and up down the aisle for exercise.”

But on a recent visit, he had to block someone with his shopping cart because it seemed they were getting too close. “I love people. I want to go and accommodate them, but it’s my fault, too, for moving in a direction where it’s cluttered.”

De Lima, who is Native Hawaiian, stars in coronavirus public service announcements for the state.

Refraining from hugging and kissing should be the least of Hawaii’s worries right now, he said, but he understands interpersonal contact is an automatic reaction here.

There are other authentic Hawaii ways to greet each other, he said, including the subtle chin raise and the shaka — thumb and little finger extended outward from a closed fist, known outside Hawaii as a “hang loose” gesture.

“This shaka can reach 6 feet, braddah — no worry, no need get any closer,” he joked in Pidgin, Hawaii’s creole language. “They cannot be hard head,” or stubborn.

“But Hawaiians as far as hugging and kissing and breathing on each other. Well, you know, even I have a hard time with that breathing thing. Especially after you went to an Italian restaurant,” he joked, “and you had garlic spaghetti.”