Why Cranking Up Debt and Deficit Right Now Isn’t Crazy 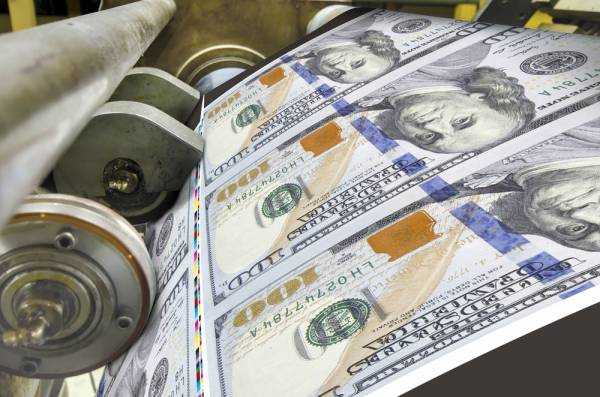 If you worry about fiscal and monetary policy, there’s reason to be worried, since the White House, the Congress, and the Federal Reserve are all pushing out, or printing, trillions of dollars in an effort to revive the COVID 19-stricken economy.

For instance, the “deficit hawks” at the Committee for a Responsible Federal Budget headlined a study last month: “New Projections: Debt Will Exceed the Size of the Economy This Year.” The study concluded, “At some point, such high and rising deficits and debt levels will prove unsustainable.”  And on May 4, the Treasury Department announced that it was borrowing an additional $3.05 trillion, just for the second quarter of 2020.

In the meantime, Reuters reports that the Federal Reserve’s balance sheet—a reflection of the money it has created—has increased to a record $6.7 trillion, up 60 percent since March. To put that another way, in just a few weeks, the Fed’s holdings grew from a fifth of U.S. GDP to a third. (And of course, if the GDP shrinks further, then the Fed’s share of the economy will loom even larger.)

Meanwhile, The Wall Street Journal headlined an April 29 editorial, “The Government Economy,” taking note of the combination of government-ordered lockdowns and massive fiscal and monetary infusions. The Journal lamented, “This danger is real and growing,” adding that America must save itself “from the stranglehold of government.” (The Journal did allow one cheery note for investors: “The silver lining, if there is one, is that the equity and financial markets took the GDP report in stride.”)

Indeed, the Journal’s free-marketeers are also worried about the fisc of other countries. Thus an April 27 editorial was headlined, “The Central Bank That Ate Japan.”  Taking to task the the Bank of Japan’s announcement that it planned to “buy government bonds in unlimited quantities” (bond-purchases mean putting cash in the hands of bond-sellers), as well as buying corporate debt and equity, the Journal opined that such purchasing is “a major problem,” because it “distorts prices.”  Speaking more broadly, the editorial concluded, “central banks need to make sure private investors still are driving the market.”

The Journal’s adjurations notwithstanding, other central banks are venturing into the same territory. The Financial Times reports that the European Central Bank (ECB), citing conditions “unprecedented in peacetime,” intends to buy more than €1 trillion ( $1.1 trillion) of bonds this year; the ECB added that it was “fully prepared” to do much more. Indeed, injecting a martial tone, ECB chief Christine Lagarde declared, “Let us understand the whole firepower the ECB has available … We will use the full flexibility to deploy this firepower to intervene.”

Lagarde’s use of the word “firepower” seems appropriate, since we are, after all, fighting a war against the coronavirus. In the most literal sense, we must kill the virus before it kills us, as well as our economy.

Indeed, the immediate reality of a war footing ought to put long-term concerns about fiscal impact in proper perspective. That is, our physical lives, our day-to-day economic well-being, and our ultimate victory—in the form of a vaccine—are more important than zeroes on a balance sheet somewhere.

Nation-states have always understood this point. That’s why, for example, the U.S. national debt grew to 119 percent of GDP in World War Two. Interestingly, beyond the obvious pluses of beating Hitler and Tojo, that big debt did not even prove to be damaging. After the war, we sold off wartime factories—factories that had been mobilized to innovate in everything from electronics to steel to nylon—and thereby set in motion the great postwar economic boom.

We might further recall that in 1815, in the wake of the two-decades-long Napoleonic Wars, Britain faced an even greater public debt, some 250 percent of GDP. And yet the nation launched itself on a century of unparalleled Victorian prosperity and progress.

The moral of both of these stories: It’s the sovereignty of the country, as well as the productivity of the economy, that matters most.

To be sure, many policy mavens today insist that the deficit, and debt, are supremely important. That’s the view of some Hooverite types on Wall Street, along with their many hired guns, but it shouldn’t be guidance for Main Street. You see, financiers naturally exalt financialism, defined as the ability to move money anywhere, be it across the country or across the planet. Yet in the meantime, ordinary people exalt the closer-to-home verities of family, of tradition—and of survival.

In theory, the liquidity generated by high finance benefits everyone, but in practice, we’ve learned that it mostly helps the financiers themselves, since they can arbitrage everything—including tax rates—to their own advantage. And that’s why the rise of Wall Street has coincided with the decline of so many Main Streets, leading to a staggering increase in inequality.

Yet here’s the reality of the U.S. economy: It’s only as strong (or as weak), as the factories, farms, mines, oil wells, vehicles, computers, and communications devices within our borders—as well as, of course, the people who know how to operate these assets. That is, the real economy does not consist of account balances and ownership titles. Property rights are important, but property itself is more important. And money, of course, is a merely a metric of balances and ownership titles.

So money is useful, and yet it’s most useful as a tool to help people create the economic and physical circumstances by which they can defeat the ancient perils of scarcity, poverty, and disease. In other words, money should be prized most for its contribution to the common good; it should not be much valued as an end in itself. And if financialist propagandists have tried to convince us otherwise, maybe we should no longer be listening to them.

To put that another way, actual production matters more than financial legerdemain. And so we come to the reality that producerism is more important than financialism. Producerism gives us practical knowhow for the many—from the vision of an entrepreneur, to the diligence of an engineer, to the toil of worker—while financialism gives us many zeroes for the few (to be followed, of course, by the socially destabilizing conspicuous consumption of that few).

Ralph Gomory, the onetime chief scientist at IBM and later head of the Alfred P. Sloan Foundation, summed up the producerist point nicely: “It’s better to know how to make a car than it is to own a car.”

In his recent book, The New Class War: Saving Democracy from the Managerial Elite, Michael Lind draws a sharp distinction between “finance capitalism” and “industrial capitalism.”  It’s industrial capitalism that’s truly valuable, Lind argues, and yet here in the U.S., financiers have hollowed out our industry, transferring it to China. So what’s needed now, he adds, is Hamiltonian “national developmentalism,” as surviving producers team up with governments to build up both our infrastructure and our productive work force. Finance would still play a role, of course, but only as a well-regulated supporting player, as was the case from the 1930s to the 1970s.

Today, in this current crisis, we face the dangers of both a new depression and a long struggle against China. In confronting both threats, our greatest strength is the collective resolve of the American people (if we can revive it), as well as the productive capacity of the American economy (if we can restore it).

And if, in the course of this vital reviving and restoring, we find ourselves spending money financialists don’t want us to spend, well, such expenditures are a small price to pay for national survival. After the crisis is past, we can restore normalcy, just as we did after World War Two.

But the prime objective must be for this republic to survive. And if it survives, the financialists will do just fine.

James P. Pinkerton is a longtime contributing editor at The American Conservative, columnist, and author. He served as longtime regular columnist for Newsday. He has also written for The Wall Street Journal, The New York Times, The Washington Post, The Los Angeles Times, USA Today, National Review, The New Republic, Foreign Affairs, Fortune, and The Jerusalem Post. He is the author of What Comes Next: The End of Big Government–and the New Paradigm Ahead (1995).He worked in the White House domestic policy offices of Presidents Ronald Reagan and George H.W. Bush and in the 1980, 1984, 1988 and 1992 presidential campaigns.