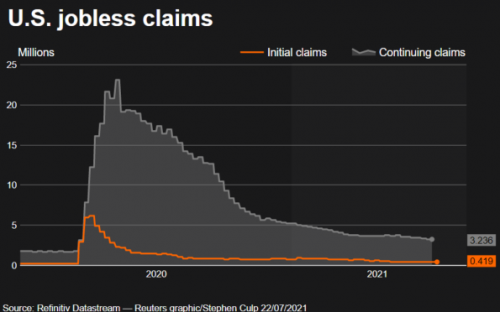 WASHINGTON, July 22 (Reuters) – The number of Americans filing new claims for unemployment benefits rose to a two-month high last week, a reminder that the labor market was far from being out of the woods as the nation confronts a resurgence in new COVID-19 infections.

Still, the weekly jobless claims report from the Labor Department on Thursday, showed more people are returning to work, a trend that bodes well for July's employment report. The Delta variant of the coronavirus is behind the latest outbreak, with states that have low vaccination rates worst affected.

"The rise in jobless claims this week tells us that the labor market's troubles are not completely behind us and the Delta variant may yet throw a monkey wrench into the economic recovery from the shortest recession in American history," said Christopher Rupkey, chief economist at FWDBONDS in New York.

Initial claims for state unemployment benefits increased 51,000 to a seasonally adjusted 419,000 for the week ended July 17, the highest level since mid-May. Data for the prior week was revised to show 8,000 more applications received than previously reported. Economists polled by Reuters had forecast 350,000 applications for the latest week.

There were large increases in filings in Kentucky, Michigan, Missouri and Texas. Some of these states have experienced a surge in new coronavirus cases.

Though economists do not expect large-scale business shutdowns similar to 2020, the latest wave of infections poses a risk to the economy. The National Bureau of Economic Research's business cycle dating committee declared on Monday that the pandemic recession, which started in February 2020, ended in April 2020.

Some of the rise in claims likely reflects difficulties smoothing the data for seasonal fluctuations following the upheaval from the pandemic. In normal years, layoffs are usually expected to decline in the second half of July. Before the pandemic, summer factory closures were the norm in early July, especially in the automobile industry.

The four-week average of claims, considered a better measure of labor market trends as it strips out weekly volatility from the data, rose only 750 to 385,250.

"We need to filter the noise in the data points and not lose sight of the big picture, which is that the trend line continues to head lower, said Anu Gaggar, senior global investment analyst at Commonwealth Financial Network in Waltham, Massachusetts. "There has been some distortion in data and in consensus expectations around automakers' annual retooling shutdowns that will work its way through the system in the upcoming weeks."

Claims have declined from a record 6.149 million in early April 2020, though they remain above the 200,000-250,000 range that is seen as consistent with healthy labor market conditions.

While other data on Thursday showed a rebound in sales of previously owned homes in June after four straight monthly declines, the pace was moderate as higher prices and low inventory remained constraints. read more

Stocks on Wall Street were mixed. The dollar (.DXY) was little changed against a basket of currencies. U.S. Treasuries were higher. 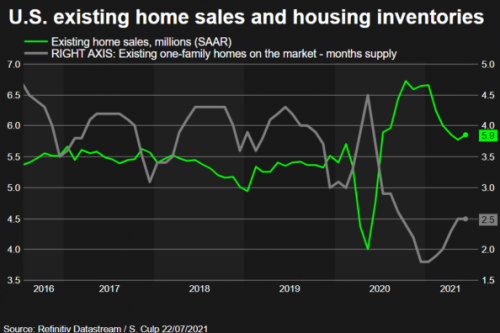 Last week's claims data covered the period in which the government surveyed business establishments for the nonfarm payrolls component of July's employment report. Claims were little changed between the June and July survey periods.

The economy created 850,000 jobs in June after adding 583,000 in May. Employment is 6.8 million jobs below its peak in February 2020. Claims data have been muddied by the federal government's expansion of benefits to people who do not qualify for the regular state programs. People have to apply for state programs to determine eligibility for federal benefits.

But the unemployed are returning to work. The claims report showed the number of people continuing to receive benefits after an initial week of aid dropped 29,000 to 3.236 million during the week ended July 10, the lowest level since the pandemic started.

The so-called continuing claims, which are reported with a one-week lag, have been falling since late June, and data next week will offer more clues on how hiring fared in July.

At least 20 states led by Republican governors have pulled out of federal government-funded unemployment programs, including a $300 weekly payment, which businesses claimed were encouraging unemployed Americans to stay at home.

There were a record 9.2 million job openings at the end of May. About 9.5 million people are officially unemployed.

Evidence is mixed on whether the early termination of federal benefits, which started on June 12 and will run through July 31, is encouraging job searches. The expanded benefits will lapse on Sept. 6 for the rest of the country.

"We expect the downward trend in continuing claims will gather momentum as top-off benefits end in all states in early September and other constraints on labor supply including lack of childcare recede," said Nancy Vanden Houten, lead U.S. economist at Oxford Economics in New York. "The latest surge in coronavirus cases may make some individuals more reluctant to return to work, however."

At least 12.6 million people were receiving benefits under all programs in early July, down 1.263 million from late June. The latest resurgence in coronavirus infections could sharpen criticism of the states that have terminated federal benefits.

"Businesses in hard-hit areas could be forced to curtail operations and shed positions if new restrictions are needed," said Andrew Stettner, senior fellow at The Century Foundation. "What will happen to the nearly four million workers whose unemployment benefits have been cut off early?"