The New Class War Comes For The Economy 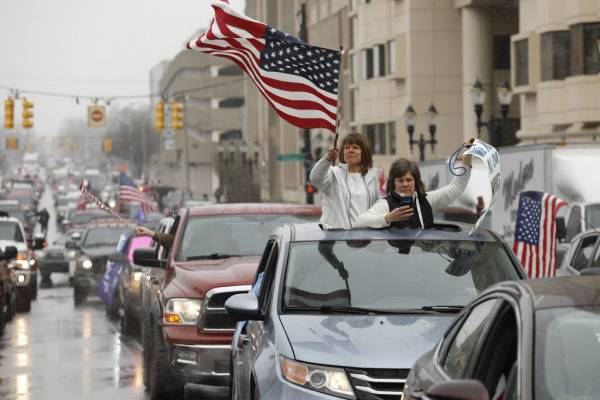 The coronavirus is being politicized. We hear it all the time. A recent headline at The Atlantic reads: “The Social-Distancing Culture War Has Begun.” On the New York Times opinion page, a contributor laments: “The reopen America protests are the logical conclusion of a twisted liberty movement.” And Vox suspects that GOP megadonors backed recent protests in the Midwest in hopes of starting a new tea party movement that could catapult Trump to reelection in 2020.

Not so fast. Frequent TAC contributor, Harry Kazianis took to Twitter to push back against that narrative. “25 million people have lost their jobs thanks to #Coronavirus,” he said. “That’s close to the size of Texas suddenly being totally unemployed. People who are protesting aren’t right-wing nuts. They are scared they will lose their homes, that they won’t be able to eat and more.”

Which side is right? Well, the Federal Reserve Bank of St. Louis provided some clarifying data about who stands to lose the most from social distancing in a recent report: “The occupations at the highest risk of unemployment also tend to be lower-paid occupations. The average annual earnings of the low-risk occupations is $64,600, about 75% higher than earnings in the high-risk occupations, at $36,600.” They went on to note that, “the economic burden from this health crisis will most directly affect those workers who are likely in the most vulnerable financial situation.”

While attitudes about reopening the economy may break down along party lines, perhaps the polarization has less to do with party affiliation per se, and more to do with geographic and class conflict, which are often one and the same. After all, the set of issues that led to Trump’s election in 2016 were not exactly taken from the Bush-McCain-Romney playbook.

The contentious issues that strike at the heart of politics today are not primarily about right versus left but about “winners and losers,” those who control the commanding heights of American society and those who do not. While affluence certainly plays a significant role in this divide, it’s not the only factor. Culture matters too. Many successful entrepreneurs or small business owners identify more with the lifestyle and values of the American heartland than they do with those of coastal elites.

The owner of a tool and die shop in Wisconsin, for example, may belong to the local country club and spend winters in Naples, Florida, yet he or she may be more “MAGA” than a woke journalist or professor living off of Ramen noodles in a studio apartment. Which leads me to believe that it is class more than partisanship that drives the culture wars in 21st century America. Yet, most elites fail to understand politics in these terms.

As Michael Lind points out in American Affairs, “None of the dominant political ideologies of the West can explain the new class war, because all of them pretend that persisting social classes no longer exist in the West.” This is especially true of neoliberalism, which he describes as “the hegemonic ideology of the transatlantic elite.” He goes on to conclude that “neoliberals can only attribute populism to bigotry or irrationality” because they are blinded by a new faith in identity politics, which overemphasizes barriers posed by race and gender at the expense of class conflict.

But when we take a step back and assess the core issues that polarize our society, it’s evident that class conflict explains the tone-deafness felt by both elites and working and middle-class Americans when debating hot button topics.

American foreign policy provides the most striking example of this divide. In short, elites in Washington D.C. start the wars but boys and girls from the Heartland fight them—and bear the scars for decades to come. As former chief-of-staff to Secretary of State Colin Powell, Col. Lawrence Wilkerson, reported on these pages, “the Army now gets more soldiers from the state of Alabama, population 4.8 million, than it gets from New York, Chicago, and Los Angeles combined.” Rarely are the children of hedge fund managers, filmmakers, and senators sent to die in the deserts of Syria and Afghanistan.

This imbalance represents the military-industrial complex at its most sinister. A small set of oligarchs on the coasts profit off of lucrative defense contracts and speaking gigs at prominent think tanks and talk shows while ordinary citizens give their last full measure of devotion for the flag, often unaware that our wars do little to advance America’s vital national interests and often undermine our own security.

TAC board member, Will Ruger, summed it up succinctly by citing a recent YouGov poll: “With nearly 70 percent responding in favor of bringing our troops home from Afghanistan and Iraq, it’s clear that our approach to the Middle East doesn’t square with the will of the American people who bear the human and financial costs of these decisions.”

And yet, despite having the support of the American people, whenever President Trump makes a statement about bringing troops home from the Middle East, the editorial pages of nearly every major publication unite against him to bemoan that we are betraying our allies and abandoning U.S. global leadership. In short, the elites and the people not only don’t see eye to eye, they’re living on different planets.

As you move on down the list to other issues like globalization, unchecked immigration, and political correctness, the fissures continue to grow. The benefits to main street Americans are few, the costs for society are high, and the rewards almost exclusively go to the people at the top. But when you turn on the news, one side is oblivious to what the other side regards as obvious.

By looking through the prism of class conflict, it’s clear why Americans are so divided about whether or not we should reopen the economy. For the sake of the country, however, a class compromise would be far superior to a protracted culture war.

John A. Burtka IV, executive director and acting editor, graduated from Hillsdale College and the Faculté Jean Calvin in Aix-en-Provence, France. He was a Lincoln Fellow at the Claremont Institute in 2018. He has appeared on Fox News and Fox Business and written for The Washington Post, Richmond Times-Dispatch, First Things, The American Mind, and The Intercollegiate Review, among others. Previously, he worked for the Intercollegiate Studies Institute and participated in academic fellowships at Washington College and The Trinity Forum.

Previous : After COVID, Is the Buffet Yesterday’s Leftovers?
Next : How To Change The Rules Of Trade To Bring Manufacturing Home