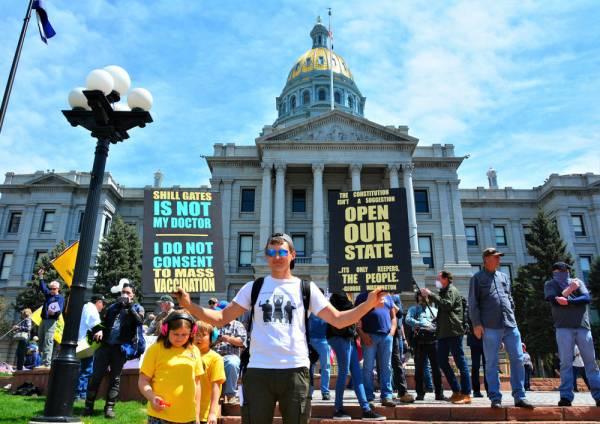 Around 2,000 people descended on the Pennsylvania state capitol in Harrisburg on Monday afternoon. They carried signs declaring, “Don’t be a sheeple,” “I need a haircut,” and the particularly chilling, “Open businesses anyway.”

Even worse, pictures showed protestors tightly packed on the sidewalks with nary a facemask in sight, except among the jackasses openly carrying AR-15s at a protest that had nothing to do with gun rights. Young Americans for Liberty posted a video praising the protests, apparently forgetting the Non-Aggression Principle at the heart of libertarianism. The protestors’ refusal to observe social distancing puts the old and immunocompromised at risk, and even drive-by protests, a supposedly safer alternative, have reportedly left hospital-bound ambulances marooned in traffic.

The condemnations addressed at these Reopeners and their ilk were thick and fierce. One particularly bewildered NYT opinion writer accused them of “Protesting for the Right to Catch the Coronavirus” and blamed this incomprehensible movement on “the modern far-right’s donor-funded, shock-jock led liberty movement.” Those who transcend the “Orange Man Bad” contrarianism and achieve some semblance of authentic economic leftism are even more strident, painting the Reopeners as either brainwashed bootlickers “demanding the right to go out and die to keep making the ruling class richer” or as callous McMansionites who would rather kill off the working class than miss a nail appointment.

The only possible motives, we’re told, are idiocy and evil. It’s the 2016 election all over again. Certainly, these motives do exist, and those driven by them deserve all the criticism they get, but they also aren’t the whole story. As with the 2016 election, one can reject these condescending explanations while still thinking Trump is a divisive jerk who is amplifying the most toxic voices in American political discourse. Anti-Reopeners are quick to interpret any doubts about the shutdown’s scope as the ravings of an Infowars donor thirsting for octogenarian blood, but how could they be when even the perennially level-headed Ross Douthat has voiced them?

Thankfully, the protestors don’t speak for all of us or even most of us. According to one poll, 81 percent of Americans and 68 percent of Republicans would support a national stay-at-home order. This poll fails, however, to account for a significant population of people smart enough to reject misinformation and avoid petri-dish protests, but skeptical enough of government overreach to sympathize, to one degree or another, with those in attendance. It would be a mistake to conflate the two groups, no matter how politically convenient it might be to do so. I’m not denying that the protestors in Harrisburg and elsewhere are being murderously reckless or that kooks were overrepresented among those protestors. I’m just saying that there are millions of Americans out there who watched the protests on their TV or phone and thought, “What they’re doing is dangerous, but they’ve got a point.”

Even leaving aside the obvious absurdities of closing public parks to solo hikers and putting a ban on gardening supplies, there’s plenty to be paranoid about. The progressive insistence that the shutdown’s sole purpose is to save lives and that to question authority at a time like this puts lives at risk sounds well-intentioned, but a moment’s scrutiny reveals it to be a smokescreen, and a thin one at that. They have no intention of letting this crisis go to waste. “When this is over,” John Oliver says, “this country is going to need more than band-aids; it’s gonna need f*cking surgery! Things need to change and not go back to normal.” Slate laments that “governments in the West have spent decades deliberately shedding power” and sees in the ‘Rona an opportunity to reverse this trend. Bernie Sanders goes full accelerationist, appearing positively giddy that the COVID-driven economic collapse has caused many Americans “to rethink the basic assumptions underlying the American value system.”

These politicians and pundits envision a post-corona world in which expanded state power over the economy and a beefed-up welfare state become permanent fixtures. Anyone who doesn’t want this, they assume, must have been brainwashed by Koch-funded, free-market-fundamentalist think tanks into opposing his own best interest.

There is, however, a third possible motivation: the desire for solidarity and subsidiarity.

“How terrible a thing it is,” Dorothy Day wrote, “when the state takes over the poor!” Anyone with any familiarity with Day’s life and work will know that she was no trickle-down, up-by-the-bootstraps free marketer, but despite some naïve statements in the early days of the Castro regime, Day was no socialist either. She was a distributist, a believer in voluntary cooperation and private property. The socialist is content to rely on the government. The distributist wants to have something of his own to rely on so that he doesn’t have to. He wants the same thing for his neighbors too, because if push comes to shove he’d rather rely on them than on the government.

This is an entirely rational sentiment. The last time I talked to my parents, who were forced to furlough the only two employees of their small business, they told me that the lauded Paycheck Protection Program (PPP) had run out of money and hadn’t been refilled due to partisan squabbles in Congress. Their employees got a measly thousand dollars each. And they’re not the only ones being failed. Five to seven million restaurant employees might never get their jobs back. If so many people are falling through the cracks even in the midst of the biggest bailout in government history, I can see why people are eager to re-open.

One possible solution, of course, is for government to do more, but that doesn’t change the fact that people would rather depend on voluntary transactions with their neighbors and employers than on government handouts. It would be nice if there were some way for community members to support one another in times of crisis other than via the mambo of Keynesian consumerism, but despite outpourings of private charity, state-administered welfare (necessary, as Christ said of divorce, because of the hardness of our hearts) is the only other option. Considered as an alternative to waiting around passively for an indefinite amount of time for money that may or may not be forthcoming, starting to re-open the economy starts looking awfully tempting, regardless of one’s opinion about the safety and feasibility of such a re-opening.

T.S. Eliot wrote, “‘When the Stranger says: What is the meaning of this city?’ / … / What will you answer? ‘We all dwell together / To make money from each other’?” That’s not a great answer, but it at least reveals a desire to depend on one another in some way. The need for community, shallow as that community might be, explains why so many people are loathe to trade a complex web of interconnected economic interdependency for a direct, one-way dependence on the government. If buying and selling is all we have to alleviate our loneliness and precarity, it makes sense to cling to it.

It’s possible that many of the Reopeners (and Reopener sympathizers) are hollowed-out materialists who must consume, whatever the cost, or go insane: “I shop, therefore I am.” Surely, though, some of them are small business owners whose shops and restaurants are no less paycheck-to-paycheck than the employees they’ve laid off. They’ve made a career out of voluntary exchange.

It’s also possible that many of the Reopeners are brainwashed proles willing to die for their capitalist oppressors, but again, I’m not so sure. It’s much easier for me to picture them as ordinary working people for whom working for their money and then going out and spending it at local businesses they’d rather not see close is infinitely preferable to collecting Daddy Trump’s Coronabucks (as my wife and I have taken to calling the stimulus money). These workers have been forced to trade the agency of earning a paycheck for the helplessness of waiting around while the people in Washington (or Lansing or Trenton or wherever) decide everything for them.

In short, it seems to me that the shutdown skeptics (though not necessarily the protestors) are best described as those who would rather put their trust in the people and businesses they know than in governors and senators they don’t. Re-opening businesses and lifting stay-at-home orders prematurely is still a bad idea, but the sentiment driving the doubters is understandable, even admirable, especially when those elected paternalists refuse to release their death grips on each other’s throats long enough to save millions of jobs and can’t seem to understand that a man painting his own house isn’t going to get anyone sick.

Grayson Quay is a freelance writer and M.A. at Georgetown University.

Previous : Why the Media Pounced on Poland and Hungary’s Coronavirus Measures
Next : U.S. Colleges Drained of Foreign Students, Perhaps Forever