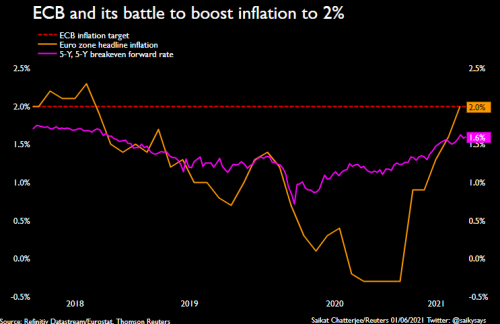 Stocks back near record highs on dovish ECB bets

LONDON, July 22 (Reuters) – Stocks returned to near record highs in Europe on Thursday as investors bet on the European Central Bank keeping its stimulus taps full open as long as COVID remains a threat to growth.

A revived appetite for riskier assets came as worries that the Delta variant of COVID-19 would seriously crimp economic recovery, eased.

The STOXX (.STOXX) index of 600 leading European shares was up 0.6 percent at 456.53 points, back within striking distance of its lifetime high of 461.38 points reached last week.

Investor focus was firmly on the ECB in Frankfurt.

"The ECB is going to do precisely what the market expects," said Michael Hewson, chief markets analyst at CMC Markets.

"In light of recent events in western Europe, the flooding, the last thing that Europe needs at the moment is a tightening of monetary policy," Hewson said in reference to last week's devastating floods in Germany and Belgium that killed over 180 people.

Italian borrowing costs sank to their lowest in over three months ahead of the ECB meeting, whose outcome is due at 1145 GMT, followed by a news conference with its president Christine Lagarde at 1230 GMT.

Investors will scrutinise her guidance on inflation as the debate over when huge pandemic-era stimulus should be reined back continues among central bankers in Europe and the United States.

"The markets are caught in a bit of pincer movement between concerns about higher inflation and lower growth and that will continue," CMC's Hewson said.

Asia's stock markets headed for their best day in two months on Thursday though growth-sensitive currencies struggled to rally, pointing to nagging doubts about the recovery.

MSCI's broadest index of Asia-Pacific shares outside Japan (.MIAPJ0000PUS) was last up 1.2%, its largest daily jump since late May, with markets green from Seoul to Sydney.

Japanese markets were closed for a holiday.

S&P 500 futures were only slightly firmer, suggesting the U.S. rally's momentum is fading.

There was no obvious catalyst for the recent rebound in stocks, or for the drawdown on Friday and Monday, though a study on Wednesday showed both Pfizer and AstraZeneca vaccines were effective against the Delta coronavirus variant. read more

"Every now and then investors look for reasons to take some profits off and that's what we saw," said Jun Bei Liu, portfolio manager at Tribeca Investment Partners in Sydney, adding that compared with 12 months ago, there are now quite a few viable vaccines.

Hong Kong led Asia's gains with banks HSBC and Standard Chartered off multi-month lows to lift the Hang Seng by 1.7%. Heavily-indebted Chinese property developer Evergrande (3333.HK) jumped about 8% after it said it had resolved legal disputes with a lender.

The Australian and New Zealand dollars were weighed down by lockdowns.

The dollar index sat at 92.758, off Wednesday's three-month peak of 93.194 and the euro was steady just above recent lows at $1.1793. The safe-haven yen nursed small losses across the board.

Rates markets idled in Asia, with trade thinned by Tokyo's holiday, leaving the yield on benchmark 10-year U.S. Treasuries at 1.2716%.

Oil prices slipped after an unexpected rise in U.S. crude oil inventories, though hanging on to most of Wednesday's sharp price rise, its biggest one-day gain in three months. Brent crude futures were last 0.2% softer at $72.08 a barrel, but had gained more than 4% on Wednesday.

Cryptocurrencies were firm after bouncing from lows when Tesla boss Elon Musk said the carmaker would likely restart accepting bitcoin payments after due diligence on its energy use. read more