Some 1.2 million Americans won’t get stimulus checks because they’re married to immigrants 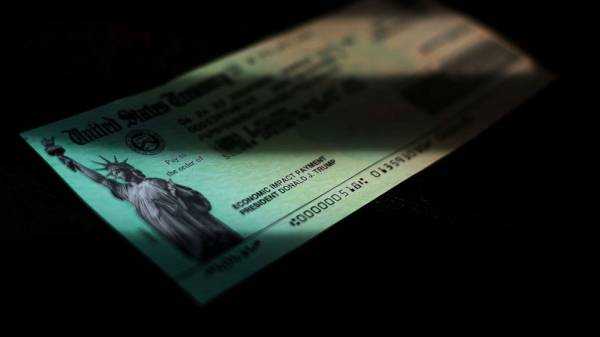 Anastasia Campos is in the same boat. She’s an American citizen who lives alone with her four children near Sacramento. Her husband, Jose, is from Mexico, and is waiting there for his paperwork to be processed so that he can join Anastasia in the U.S.

Both women are part of a federal class action lawsuit filed by the Mexican American Legal Defense fund in Maryland this week. MALDEF estimates there are 2 million American citizens who won’t receive the checks because their spouses are not American citizens, while the Migration Policy Institute estimates the number to be 1.8 million.

MORE: Who will get what and when from the $2 trillion relief package

The predicament Campos and Segundo-Hernandez face is thanks to a provision in the CARES Act, the law that provides one-time $1,200 coronavirus emergency relief payments to Americans who makes less than $75,000 per year, as well as $500 additional for each dependent child under 17. The CARES Act stipulates that any taxpayers who file with an Individual Taxpayer Identification Number (ITIN), rather than a Social Security Number (SSN), are ineligible for stimulus payments — including ITIN holders who file jointly with U.S. citizens who do have SSNs, as in the case of married couples.

ITINs are assigned by the IRS to collect taxes from workers who are ineligible to receive SSNs. Many ITIN holders are undocumented workers in the U.S., while others are people living outside the U.S. in the midst of applying for citizenship or a green card.

Segundo-Hernandez does have a Social Security number, since she is an American citizen. But she and her husband, who has an ITIN, filed jointly last year, rendering their whole family ineligible for the emergency payments.

Anastasia Campos explained that she files jointly with Jose on the advice of U.S. immigration officials, who encourage the practice to prove the legitimacy of the relationship. “We have individuals who are waiting for their papers to go through. They have not ever entered illegally. They were included on the taxes because we are told this is something Immigration wants to see. They want to see documentation, continuity,” Campos said.

“I am at home with my four children and we have nothing. We have nothing. We are lost. And feeling like I’ve been slapped in the face by my government is wrong. I have always contributed, as has my husband,” Campos said.

The Mexican American Legal Defense fund filed the class action lawsuit on behalf of the American citizens who were denied payments because they’re married to ITIN holders.

Another federal lawsuit filed against President Trump, Senate Majority Leader Mitch McConnell and Treasury Secretary Steven Mnuchin was filed in Chicago last week. Lawyers say the plaintiff in that case, who remains anonymous, is not being treated “as equal to his fellow United States citizens based solely on whom he chose to marry.”

“Plaintiff has lawfully filed taxes in the United States, yet he is being denied the rights and privileges under the CARES Act,” the lawsuit says.

On Friday, Pelosi, Schumer and Castro gathered on a conference call, which included Segundo-Hernandez and Campos, to raise awareness of the issue.

“I would say this is a monumental injustice. Right now there are millions of Americans being denied because they are part of a mixed status family,” Pelosi said. Schumer called the situation “a form of discrimination.”

But neither Pelosi nor Schumer offered specific guidance on the conference call as to how they would approach fixing the problem. Pelosi did say it should be “one of the easiest things we can do.” Senate Republicans have not indicated willingness to join them.

Castro noted the House version of CARES does include a fix for this issue, but the final version passed by the Senate did not. The CARES Act includes an exception for couples in which one member served in the Armed Forces in the past year, even if one is a citizen and the other is not.

Castro laid out the Congressional Hispanic Caucus’s stance on the issue, which is that all taxpayers regardless of immigration status should receive payments, since they pay into the system. Castro also highlighted the fact that so many ITIN holders are essential workers on the frontlines, like meatpacking plant workers, or those working in fields to ensure the supply chain of produce continues uninterrupted.

Some Congressional Democrats introduced a bill that would ensure all taxpayers, including non-citizen ITIN holders, would be eligible for the $1,200 payment. The Leave No Taxpayer Behind Act was introduced in early April by Congressman Lou Correa, who was joined by Congresswoman Judy Chu and Congressman Raúl Grijalva, but with the House out of session for most of April, the effort hasn’t gone anywhere.

Previous : Is it possible to have a safe coronavirus vaccine by New Year’s Eve?
Next : Demystifying the Golden State Warriors