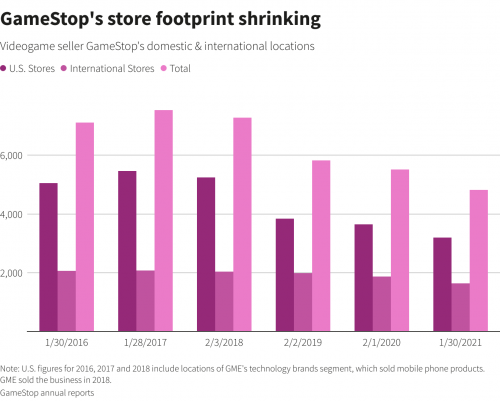 July 22 (Reuters) – When GameStop Corp (GME.N) shares surged by more than 2,500% in January, some customers joked to store staff they should thank the investors who fueled the video game retailer's extraordinary rally for their paychecks.

Employees such as Gianna Pandiscio-Ferrero were not amused. The 19 year-old high-school graduate told Reuters that, like many GameStop store employees, she worked part-time without healthcare benefits and earned barely more than the minimum wage – $7.50 per hour in Virginia, where she was based at the time.

The COVID-19 pandemic hit GameStop, like other retailers, hard, as all non-essential stores were closed in March 2020 and reopened selectively months later.

Despite this, GameStop capitalized on the stock trading frenzy driven by Reddit and other social media platforms earlier this year by selling more than $1.7 billion of new shares to investors. Little of that windfall has made its way to its run-down stores that have been losing customers to e-commerce platforms, such as Amazon.com Inc (AMZN.O), and discount retailers, such as Walmart Inc (WMT.N).

GameStop's largest shareholder, Ryan Cohen, joined its board in January and became chairman last month with a plan to revive stores and boost online sales.

Three people with first-hand knowledge of his strategy said he plans to breathe life into the stores by investing in what customers want and improving how employees can serve them.

To better understand the situation, Cohen has been turning up in stores around the United States unannounced, or "ghost-shopping", the sources said, asking not to be named.

The previously unreported plans for GameStop's stores will run in tandem with the company's push into e-commerce, they said.

A spokesperson for GameStop and Cohen declined to comment.

Cohen faces an uphill struggle to reverse the fortunes of the stores, current and former GameStop employees said in interviews.

Pandiscio-Ferrero said morale was low among store workers because their pay had become unreliable. She quit because of this in April, after six months on the job.

"We got our hours cut to the point where it was only the manager and assistant manager working by themselves for about three weeks," she said.

DJ Hill, the manager of a GameStop store in a strip mall close to Pittsburgh, Pennsylvania, resigned in June after 18 years with the company, because he didn't like the direction in which the company was heading. He said the stores no longer attracted the regular customers he used to enjoy chatting with.

GameStop, Hill said, judged store associates on how many rewards cards, warranties and reservations for future game and console releases they sold, and had barely increased his $17.50-per-hour pay in the last three years.

FROM PETS TO GAMES

Cohen is undaunted. He is seeking to repeat his success with online pet supplies retailer Chewy, which he sold to PetSmart for $3.35 billion in 2017. He wants to turn GameStop into a gaming and entertainment retailer or the "Chewy of gaming", with lower prices, better selection and faster delivery times on online orders than its rivals.

But unlike Chewy, which only operates online, GameStop generates most of its revenue in its stores. With its success in e-commerce uncertain, pressure has mounted on GameStop to fix them. Over the last 15 months, it has closed 811 stores, leaving it with about 3,000 U.S. stores and 1,600 stores abroad.

Cohen has made unannounced visits to about a dozen GameStop stores, mostly without being recognized, the sources said. Several employees said in interviews that they have never heard of the 35-year old executive, asking if he is an actor or maybe a rock star.

In one instance, he dropped in on a GameStop store in a mall in Arlington, Virginia, in May dressed in black pants, a black puffer jacket, and a black face mask.

Cohen was often infuriated by the dusty shelves and empty racks he found, as well as by some employees who did not greet customers properly or offer to help them, the sources said. The "only differentiator" for GameStop was customer service and that needed to improve, Cohen has told executives and staff.

He added that he was more bullish about the stores and had earmarked some of GameStop's stock market windfall for redesigning and restocking stores and training staff, the sources said.

Cohen plans to improve the customer experience by filling stores with the basics and the most popular items plus creating sections to cater to specific categories of customers, from video game fanatics to mothers seeking puzzles for their children, the sources said.

GameStop also plans to extend opening hours into the evening to serve gamers who tend to be night owls, and is offering to match the price of goods at Amazon and Walmart, if customers find them cheaper there, the sources said.

The Grapevine, Texas-based company, which is debt-free after its capital raises, also plans to hire new people at the stores and meet long-standing requests by many store managers for refurbishment, the sources said. Since Cohen's arrival, GameStop's board and executive ranks have been overhauled and these newcomers are concentrating on the stores.

Some retail industry veterans are skeptical the turnaround plan will work.

Mark Cohen, the former CEO of Sears Canada who is not related to Ryan Cohen, said it would be hard for GameStop to reverse the trend of most video games being bought or downloaded online.

"It is an irrevocable move to technology-based acquisition of products. These folks (at GameStop) are not likely to be successful in the mid to longer term," he said.

Most Wall Street analysts share these concerns, saying the so-called meme stock rally has massively over-valued GameStop. Its market capitalization has surged to nearly $15 billion from a little over $1 billion at the beginning of January.

Another challenge for GameStop is that it ships a lot of inventory for its online orders from its stores, the sources said, which can add days and even weeks to delivery times.

To aid distribution, it is starting to lease warehouses, following a strategy familiar to the dozens of Amazon veterans Ryan Cohen has recruited – including its new CEO Matt Furlong.

GameStop also plans to bring customer service by telephone, chat or other electronic means in-house after relying heavily on call centers in the Philippines and Mexico, the sources said.

It is close to signing a lease on a 30,000-square-foot call center space in southern Florida, they said.

Kelli Durkin, a former vice president of customer service at Chewy who Cohen tapped to overhaul GameStop's customer service, plans to expand her team from 60 to about 200 people by the fourth quarter of this year, the people familiar with the plans said.

Cohen has asked Durkin's team to train customer service representatives on how to listen to customers, the sources said.

The micro-managing goes as far as instructing customer service representatives not to use phrases such as "no problem" or "no worries", which can have negative connotations.

While Cohen sees these changes as necessary to adjust to the changing landscape, Hill, the former store manager, said some of them will make it less appealing for workers to pursue careers with the retailer.

"This company used to be a fun company to work at," Hill said. "I would like to see them succeed. At the same time, get out if you can."

Previous : Lift Off for Lord Bezos
Next : The Senate’s infrastructure gamble, explained