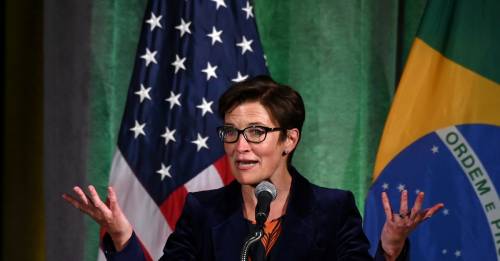 Citi’s new boss could grow or shrink to greatness

Jane Fraser, the new boss of Citigroup (C.N), says she wants her bank to be excellent. Much of what the $150 billion U.S. lender does at the moment is middling. If Fraser can clean up Citi’s tattered image, brilliance could come from bulking up. Otherwise, a breakup could shine more brightly. Both routes come with challenges.

The Scot hinted at the slimming-down approach last week when she said Citi will sell a collectively unprofitable group of retail networks across Asia and Europe, barely two months into her tenure as chief executive. While Fraser isn’t talking about dismantling the empire, which reaped $73 billion in revenue over the last four quarters, it’s worth totting up the value of its three main chunks.

Start with Citi’s banking business in the United States. While it’s a huge credit-card issuer, both under its own name and for brands like Best Buy (BBY.N) and Macy’s (M.N), Citi’s assets place it a distant fourth after JPMorgan (JPM.N), Bank of America (BAC.N) and Wells Fargo (WFC.N), according to Federal Reserve data. That jars with Fraser’s claim that she wants Citi’s divisions to occupy market-leading positions.

Even so, it’s a big portion of Citi’s market value. The consumer business makes around $9 billion of operating profit a year before provisions against bad debt. Next-smallest rival U.S. Bancorp (USB.N) trades at 8.7 times its own pre-provision profit. On the same multiple, Citi’s home-turf retail bank could be worth $80 billion.

Then there’s Mexican lender Banamex, which by Fraser’s reckoning has a decent market share of around 20%, plus a selection of Asian credit card and retail bank operations. Collectively they make a little more than $2 billion in net income a year. Put those on a 10 times multiple, roughly where bigger and more efficient rivals Santander Mexico and Banorte trade, and they’re worth $20 billion.

That leaves Citi's institutional business – a trading, lending and cash management beast with tentacles extending across the globe. While Citi doesn’t have the flashiness of Goldman Sachs (GS.N), its corporate connections suggest its $14 billion of institutional net profit over the past four quarters could be valued on a par with Goldman’s 8 times earnings, according to Refinitiv, giving it a value of $110 billion.

Put it all together, and Citi’s parts could be worth over $200 billion, more than a third above its current market value. A broader manifestation of the same problem is that for most of the past decade, Citi’s market capitalization has been less than its net assets, which normally act as a floor for a bank’s valuation.

To realize some of that buried value, Fraser could go shopping. Put Citi and U.S. Bancorp together, for example, and the result would be a consumer bank with $43 billion of annual revenue, bigger than Bank of America’s business and with more highly profitable credit cards. Citi has branches in places like New York where U.S. Bancorp, which is mostly spread across the Midwest and West Coast, doesn’t.

It would be a quicker way to create a top-ranked U.S. retail presence than fighting for business one person at a time. Fraser thinks she can add customers with apps and digital services, but that’s a slog, and her rivals are all trying to do the same thing. Moreover, crunching together two banking franchises can generate substantial cost savings. In M&T Bank's (MTB.N) deal to buy People’s United Financial (PBCT.O), announced in February, the two reckon on cutting one-third of the smaller bank’s operating costs. In U.S. Bancorp’s case, that would be $4 billion a year.

The problem is that there’s virtually no chance of Washington's regulators letting a company as accident-prone as Citi make a huge acquisition for the next couple of years at least. Recent gaffes include a $400 million fine over its sloppy processes and accidentally wiring nearly $1 billion to a group of hedge funds. In time Fraser might get permission from the regulators to grow to greatness, but only if she can do what her predecessor Mike Corbat didn’t, and keep Citi’s nose clean.

If bulking up doesn't work out, Fraser's other option is to shrink. Ditching small markets like Poland and Vietnam, as she is now doing, isn’t really significant. But selling the U.S. consumer bank would be a bold step that might unwind Citi's so-called conglomerate discount, which amounts to a kind of punishment for sprawl inflicted by investors.

Dismantling Citi as aggressively as that would also need to wait, though. The U.S. retail bank's deposits are a cheap form of funding, and there’s no obvious taker, either. Wells Fargo might covet Citi’s credit card business, but Charlie Scharf, the San Francisco-based lender's newish boss, is still trying to mend fences with regulators after his bank’s fraud problems. Retail banking is also a way to snare wealth management customers, which for now is part of Fraser’s grand plan.

Selling Banamex would be an easier interim step towards a more focused bank. But it would only be a start, and Fraser would have to have a bigger plan in mind. The business it's hardest to imagine Citi parting with, and the one that in any case punches its weight, is the institutional behemoth.

In the long term, keeping today's middling Citi muddling along isn't an option. Fraser has one thing in her favor though: investor tolerance. Corbat left an institution that had delivered shareholders a total return of only around a third of what they would have got from Bank of America or JPMorgan during his eight-year tenure. Even then, shareholders weren’t clamoring for a breakup. Fraser has time to think bigger.