After COVID, Is the Buffet Yesterday’s Leftovers? 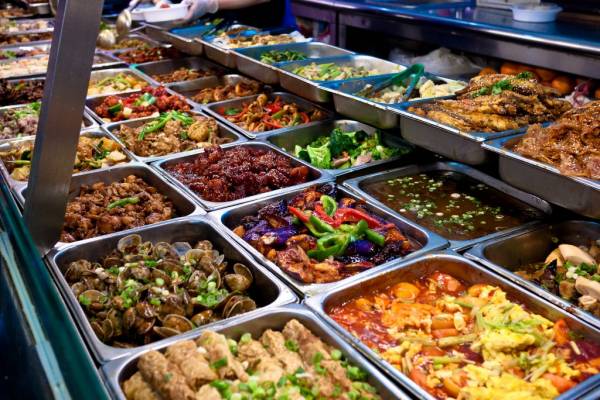 A recent piece in appreciation of the all-you-can-eat buffet struck quite a few nerves; readers apparently agreed with me that these humble, somewhat dated, and increasingly downscale establishments are a resource to families—particularly those that are larger and lower-income—and more broadly are a piece of American popular life.

For the last few days I’ve been craving a buffet dinner, waiting for the stay-at-home orders to lift and for life to become more or less normal again. But as the crisis grinds on, one can’t help but wonder whether buffets will survive. Much more consequential things: concerts, sports matches, Easter services, even elections, have been canceled or indefinitely postponed. But when this blows over, it’s important that we don’t let public health become what “national security” became after 9/11. We must continue to have family reunions, attend worship services and concerts and ball games, vote, shake hands, and hug. And occasionally indulge in the all-you-can-eat buffet—if it pulls through.

At one time, before Instagram, before “foodie” and “food porn” became household words, and before the likes of Michael Pollan turned questions of food into weighty ethical dilemmas, the all-you-can-eat buffet was an American staple. Before the golden age of Chinese buffets, there were the steakhouse-and-salad-bar joints, born in the consumerist and complacent 1980s: Cactus Willies, Great American Steak and Buffet, Golden Corral, Ponderosa, Sizzler, Old Country Buffet. These types of places have slowly declined from their heyday (with the exception of Golden Corral), to the point where they’re few and far between, and often empty where they do survive. They have increasingly become gathering places for retired folks or lower-income families, as more affluent diners have moved on to healthier—and trendier—options.

Reminiscent of the “filtering” phenomenon in housing, where most de-facto affordable housing is simply older regular housing, there is something of a filtering dynamic for food trends. Fast food, casual chains from Howard Johnson’s to TGI Fridays, and of course buffets, were all trendy at one time and popular with affluent and middle-class customers. All are today increasingly seen as downscale, unhealthy, or simply boring. The foodie world has left these dining concepts in the dust, and, in some ways, implicitly judges what most Americans eat most of the time.

A little back-of-the-napkin number-crunching backs this up. I looked up about 20 buffet restaurants in the Washington, D.C. area and compared the reviews on Yelp and Google. Google reviews are brief, often just a sentence, and are obviously written by the everyman. Yelp reviews, however, are of a higher caliber, workshopped by users who often seem to consider themselves freelance food critics. I calculated the average number of stars awarded to buffets on each site. The Googlers gave an average of 3.75, a solid “not bad” to “pretty good.” The Yelpers, however, gave 2.6, more than a full star lower and reaching into “never again” territory.

It’s a shame, because buffets have performed a kind of cultural service, and crystalized a sort of genuine, emergent diversity. This is even truer of Chinese buffets in particular. At one time, they were some of the only places out in the suburbs to find something approaching authentic food. In between the lo mein and orange chicken, or perhaps only at certain hours or in a little counter in the back, many of these establishments also catered to the tastes of immigrants and Chinese-Americans who didn’t go for Chinese-American fare. The variety of the buffet, strange on a menu but fitting when staring down a bevy of steam tables, meshes with and reflects the variety of America. A restaurant that can cater simultaneously to low-income Hispanic families, after-church African-American crowds, hungry teenagers, indecisive diners, and homesick immigrants is a wonderful thing. One distinct memory from my many grad school buffet nights is the number of times the generic happy birthday song came on over the restaurant speakers. Generic things can mean something.

One 2007 review for a now-defunct buffet in central New Jersey with a little Taiwanese food counter, said: “It’s about the only place in central Jersey you can find these dishes. Of course, no comparison to Cupertino Village in CA (or Taiwan), but when you’re in the armpit of America, you gotta take what you can get.” That’s one way to put it. Several other reviewers echoed the same sentiment: this little corner of a buffet restaurant in affluent, largely white suburban New Jersey offered dishes they grew up with half a world away.

Nearby in suburban Princeton, Super Star East Buffet (RIP, 2000-2016) used to serve dim sum on weekends, and earlier in its life even offered tours of the massive smorgasbord. There was clearly a lot of excitement and innovation in the buffet concept that has since faded. And as excellent ethnic restaurants have exploded in number and popularity, the buffet’s stodgy and imperfect cross-cultural appeal has been muted. Reading those reviews, from oldest to newest, conveys a sense of that trajectory. It’s a crowdsourced, bottom-up history of a dining concept.

Shuttered buffets often live on as new buffets, with new names and and cuisines, since the configuration is ready to go and expensive to rip out. The retail footprint left by the collapse of the 80s-era American buffets has seen many of their vacant locations become Flaming Hibachi Supreme Buffet or some such. But there’s no question the absolute number of buffets has long been shrinking.

My own favorite buffet growing up in New Jersey was located in Somerville, another affluent community with an NJ Transit station for New York commuters. They opened in the 1990s and closed in 2014. A buffet in my hometown of Flemington opened in the ’80s and closed in the early 2010s, now a deli. A fantastic place in North Jersey, with a friendly owner who walked the floor and solicited feedback, closed a few years ago after a long run. That building is now a car dealer. And sushi buffets, except for expensive establishments, have nearly disappeared. (I recall one, aptly called “Sushi Buffet,” which is now a Texas Roadhouse.)

The buffets I grew up with, once seemingly in every strip mall, are endangered. Like ice cream trucks or 70s-vintage red-sauce restaurants with faux-Italian murals, they’re increasingly rare, and may at some point be viewed with a certain nostalgia. Very few today are being built from scratch. It is always interesting, and slightly mournful, to watch something obsolete, out of production, and living on borrowed time dwindle and yet also in some ways flourish. One thinks of CRT televisions, cassette tapes, and other bits of technology that have carved out new niches and made new fans even as their mainstream appeal has all but evaporated.

But while the buffet is no longer common or crowded in the affluent places it was in recent decades, the all-you-can-eat concept hasn’t gone anywhere. Beach towns, college towns, and lively urban places are crawling with made-to-order all-you-can-eat sushi joints. (One of these took over the space occupied by my beloved buffet in Somerville.) The premium $50-per-person Brazilian churrascarias like Fogo de Chão and Texas de Brazil are another popular concept. Staid, high-end sushi buffets survive, and how can you forget brunch smorgasbords with bottomless mimosas and Bloody Marys?

Health concerns over buffets, such as food poisoning, cross-contamination, and shared surfaces are a major factor. So are concerns over nutrition and quality. But in addition to this, perhaps getting rid of the buffet while retaining the all-you-can-eat is a way of obscuring the underbelly of the idea. It would appear that the affluent do all-you-can-eat more fashionably. The buffet with the steam tables and shared tongs and sneeze guards and kids reaching their hands into the ice cream freezer is becoming a downscale phenomenon. This dynamic is not entirely dissimilar to that of the overzealous oenophile who doesn’t consider himself an alcoholic because he drinks fancy bottles every night. These upscale AYCE establishments don’t remove the gluttony factor, only the appearance of it.

And then, of course, there’s COVID. Some people are adapting to quarantines and shelter-in-place orders by relishing the opportunity to literally get their hands dirty. Others will likely find themselves practicing aggressive hygiene for a long time to come. An unscientific Twitter poll of how likely people would be to eat at a buffet post-COVID showed a distribution not unlike the review distribution for buffet restaurants themselves—a large plurality dead-set against, a smaller plurality who can’t wait. The numbers I crunched on local buffet reviews showed this too. For every single establishment, the most common number of stars awarded was either 5, 4—or 1.

But it’s not just about customer behavior. A great report in Washington City Paper notes that despite their experience with takeout, many Chinese restaurants have opted to shutter completely during the stay-at-home period. (In some cases, interestingly, this was because their owners or employees had ties to Wuhan and knew how bad COVID was going to be.) Buffets—Chinese buffets, anyway, and there’s not a whole lot left in most places—may be in the same boat, or worse. Unlike Chinese restaurants with their takeout business, buffets rarely have a menu and produce nothing in small quantities. They’re on or off, and they rely on volume and crowds. There’s hardly a business model less well-adapted to a pandemic.

Every buffet I know of is completely closed right now. A couple of local ones have “closed” signs in their windows. Others I called had their numbers disconnected; one picked up, but was fully closed nonetheless.

But even if this ends in a month or two and a few people venture back in, will it be a critical mass to make the business model work? Perhaps, as one of my Twitter interlocutors suggested, buffets will survive in the relatively poorer and working-class areas where they’ve been trending anyway, and the affluent will wash their hands of the concept. That means I’ll just have to drive a little further for my all-you-can-eat fix.

Things change, and dynamic cultural and economic phenomena, like dining concepts, cannot be encased in amber and saved like keepsakes. If the buffet dies, it dies. But as long as it’s here, it won’t be losing my business, and maybe it shouldn’t lose yours.

Addison Del Mastro is assistant editor of The American Conservative.  He is a graduate of the University of Maryland School of Public Policy and writes on urbanism, place, and popular and cultural history. Follow him on Twitter at @ad_mastro.

Previous : Why Did Boeing Choose to Sell Debt Over Federal Aid?
Next : The New Class War Comes For The Economy