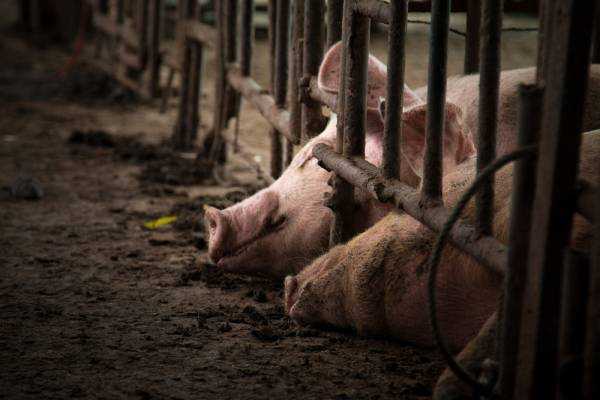 Animal rights campaigner Matthew Scully made a fair point last month in National Review when he suggested that Americans should be careful how they criticized the sordid Chinese animal market where the COVID-19 pandemic may have originated. While such wet markets are a case in point for the Chinese food industry’s abysmal treatment of animals, Scully added that the American factory farm industry is hardly much better. Whereas the Chinese industry is shockingly filthy, the American one is shockingly cruel.

He’s right, of course, but he could have punched a little harder if he’d wanted to wake Americans up to the mounting scandal of animal welfare in the United States. He omitted to mention much factual evidence that would have considerably bolstered his case. In particular, he seems to have been unaware of World Animal Protection (WAP), a London-based non-profit noted for extensively researched global surveys on how nations compare on animal cruelty. On WAP’s analysis, the American factory farm industry’s standards are below those of India. More on the WAP later.

Animal welfare is the most underestimated issue in American politics. But the issue will not remain overlooked forever. Indeed, the situation could change almost literally overnight. All that’s needed is a proverbial Rosa Parks moment, and it is probably a safe bet that such a moment awaits somewhere in the U.S. factory farm industry’s future.

For the time being, however, there are too few prominent business leaders or politicians in the United States that stand to gain by taking the issue seriously. Thus, for the immediate future, Big Ag seems destined to persist with business as usual.

How to deal with all that money that Big Ag showers on its political friends?

For Republicans in particular, the temptation to solicit Big Ag funding is ever present. After all, acquiescing to Big Ag’s agenda can readily be presented as a legitimate, even high-minded, attempt to shield wealth-creating—and job-creating—businesses from excessive regulation.

Any ambitious young Republican would, however, be well advised to resist Big Ag’s blandishments.

There is after all a matter of fundamental principle here. This can perhaps best be summed up in a rhetorical question: how much pain is it permissible to inflict on, for instance, billions of meek and defenseless chickens to shave a fraction of a penny off food production costs?

Another consideration is simple, plain-vanilla democracy. The American people have not been consulted on this and, as the animal welfare author Peter Singer points out, Big Ag’s excesses don’t win popularity contests. Indeed, anytime in recent years that ordinary American voters have been given the chance, they’ve come out firmly against those excesses.

This is illustrated, for instance, in the passing of Proposition 12 in California in 2018, which enacted California’s wide-ranging Prevention of Cruelty to Farm Animals Act. Nearly two thirds of voters backed Proposition 12.

Meanwhile in a poll conducted by the Gallup organization in 2015, more than 50 percent of Americans said they were “very concerned” or “somewhat concerned” about the treatment of animals.

One thing is clear: nothing much is going to change for America’s factory farm animals until elected representatives on both sides of the political aisle come together in common cause.

Of course, for now there remains an impression that animal welfare is a Democrats-only issue. But as Bernard Unti of the Humane Society points out, the anti-cruelty movement did not start as an expression of partisan politics. Far from it. When the movement first got going in the mid-19th century, what brought people together was a shared conviction that the human race could do better. In those days of horse-drawn wagons and Main Street butcher shops, egregious cruelty wasn’t hidden away in factory farms in the middle of nowhere. Rather it was an unavoidable everyday spectacle that was equally shocking to all decent-minded people irrespective of political leanings.

Indeed Henry Bergh, who in 1866 founded the American Society for the Prevention of Cruelty to Animals, was a Republican, and so too probably were many of his supporters. A shipbuilding heir, he ranks as probably the biggest figure in the American animal welfare movement’s history. He came to the cause after two years as head of Abraham Lincoln’s delegation to Tsarist Russia. His activities enjoyed considerable support on all sides of New York society, not least from such prominent establishment figures as Ralph Waldo Emerson, Louisa May Alcott, and Henry Wadsworth Longfellow. Longfellow was to go on in a resounding encomium to describe Bergh as “among the noblest in the land…the friend of every friendless beast.”

One thing is for sure: latter-day Republicans would be making a mistake to get too close to Big Ag. Of course, Republicans are rightly proud of their business-friendly reputation. And in recent years, that reputation has been greatly enhanced as the Trump administration has stood up for U.S. exporters in the face of massive foreign protectionism. But not every business is automatically entitled to the party’s encouragement.

Bad elements in the business community have never acquired any purchase on the party’s affections. Indeed, the party’s spunk in facing down such elements has been a recurring theme in its history. John Sherman, the principal author of the Sherman Anti-Trust Act of 1890, was a Republican, and so was Benjamin Harrison, the president who signed it into law. Moreover, the Republicans went on under two subsequent Republican presidents, Teddy Roosevelt and William Howard Taft, to set records for the number of antitrust actions they pursued.

In the words of the Republican animal welfare activist John Connor Cleveland, the chief problem is that “joining the animal-protection movement as a conservative can feel a little like being a defector.”

That said, Cleveland’s animal welfare credentials have not stopped him holding down a job as policy director for the Republican governor of South Carolina. Cleveland is not the only Republican to nail his animal welfare colors to the mast. Another is Matthew Scully, whom we mentioned earlier. Scully first came to prominence as a top speech writer for George W. Bush. He went on to write Dominion: The Power of Man, the Suffering of Animals, and the Call to Mercy, a much praised and influential book on animal welfare.

How does the United States compare with other nations on the issue of animal welfare? As mentioned earlier, the most useful source would appear to be World Animal Protection, which published a new survey in March of 2020.

Using a grading system from A to G, in which A denotes the most laudable animal treatment and G the most atrocious, WAP rated the United States a lowly D. That was far behind six leaders in Europe — Austria, Denmark, the Netherlands, Sweden, Switzerland, and the UK — which all scored a B and jointly topped the league table.

Indeed, of a total of 16 European nations included in the survey, only two ranked lower than the United States. These were Ukraine and Belarus, which were accorded respectively an abysmal E grade and a truly savage F. It is worth noting that neither Ukraine nor Belarus is a member of the European Union. In scoring a D, the United States ranked on the same level with Romania, Russia and Turkey, none of which is considered a shining city on a hill. More surprisingly, perhaps, a D score meant the United States ranked below such poor nations as Mexico, Malaysia, and India, all of which scored a C.

The United States was let down mainly by its factory farming industry.  The cages in which the American factory farm industry keeps its pigs, for instance, are allegedly so claustrophobic that the animals can never turn around. The result is that billions of sentient beings spend their entire lives in deep distress.

Generally speaking, the richer the nation the more seriously it takes the issue of animal cruelty. The United States is a remarkable exception to that rule.

For many Republicans, it’s ultimately an issue of “American values.” They argue that leaving the industry to regulate itself best maximizes freedom and consumer choice, thereby avoiding “un-American” levels of market intervention.

In the view of animal welfare advocates, however, the industry’s invocation of American values is cover for letting the fox guard the henhouse.

As the Virginia-based activist Ingrid Newkirk points out, Big Ag’s activities can hardly be held up as an object lesson in American-style free markets. For starters, the industry benefits hugely from various federal and state subsidies, not least sub-market charges for water and land.

A similar point has been made by John Connor Cleveland. In a commentary in National Review, he suggested that many programs administered by the Department of Agriculture have become “troughs of corruption and corporate influence.” Writing under the heading “Why Animal Welfare is a Conservative Cause” and citing in particular handouts to animal feed producers, he added: “This is nothing less than government-sponsored welfare to livestock producers, who are insulated from market shifts thanks to the low costs for their feed.”

By its own tacit, but revealing, admission, Big Ag has much to hide. The industry, in its monomaniacal zeal to shut down whistleblowers, has sought to impose so-called “Ag-gag laws” on several states. These laws have now been generally found unconstitutional but as a practical matter the press—both at state and national level—remains remarkably gun-shy.

This prompts a question: where exactly has the press been? Is the agony of untold numbers of sentient creatures news? No—not much anyway. The media would rather bow at the altar of journalistic fashion. If we are talking about, say, the difficulties of the transgender community finding suitable bathroom facilities, now that’s a different matter. That’s huge news. Hold the front page!

All that said, those of us who argue for decency in our relations with animals should not give up. The one good thing about journalistic fashion is that it changes. Just ask Rosa Parks.

Eamonn Fingleton is the author of  In the Jaws of the Dragon: America’s Fate in the Coming Era of Chinese Hegemony (New York: St. Martin’s Press, 2008).

Previous : How Did a Bronze Star Green Beret End Up Behind Venezuelan ‘Bay of Pigs’?
Next : Washington State Research Institute Projects Coronavirus May Kill Over 130,000 in US