What to Stream: Nanni Moretti’s “Dear Diary” and the Power of the Film Camera as Sketchbook 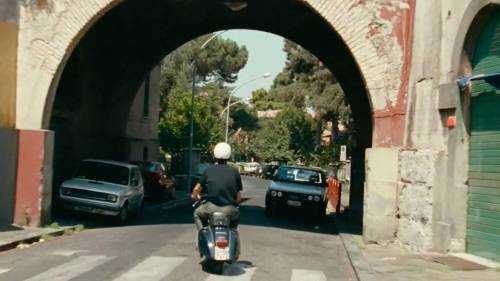 The cinema’s elusive dream is to make films with the same spontaneity, intimacy, and immediacy with which a writer can jot down impressions or an artist capture instant observations. Small movie cameras have been available for a hundred years, but have been largely relegated to amateur use; some major filmmakers have used lightweight, consumer-grade equipment to great effect in first-person filmmaking, such as Jonas Mekas, Agnès Varda, and Nanni Moretti, who made his first feature, “Io Sono un Autarchico” (“I Am Self-Sufficient”), with a Super-8 camera. Though Moretti quickly entered the realm of professional filmmaking with professional equipment and crews, the film as personal sketch remained an artistic ideal, and he often acted in his own work, sometimes playing an alter ego called Michele Apicella. He realized this ideal to its greatest extent in his 1994 feature, “Caro Diario” (“Dear Diary”)—which is now available to stream, from Lincoln Center, in a new restoration.

Moretti, starring as himself, sets the film up as three chapters of his own life story, starting with the most sketch-like and diary-like, titled “On My Vespa.” In his ruled notebook, he writes, “There’s one thing that I like to do most of all”—riding his scooter around Rome, where Moretti was born and has lived all his life. He wears a white helmet and is followed by a camera mounted on a car, so the image shows something like his own point of view with him placed inside it. Moretti’s voice-over—ruminative and combative, filled with self-doubt and self-affirmation, skeptical asides and empathetic observations—conveys that double sense of free-ranging thought merging with the delight of smooth and fast motion through the varied cityscape.

The episode isn’t only contemplative—it’s punctuated with brief, gracefully interwoven comedic interludes that must have taken some careful setup. One involves Moretti’s delight in dancing (which he displays at a zesty outdoor party), leading to his “accidental” encounter with the actress Jennifer Beals and her husband, the director Alexandre Rockwell, on a leafy residential street. Another is the funniest sequence about a film critic that I’ve ever seen in a movie: Moretti, going to see “Henry: Portrait of a Serial Killer” on the basis of an enthusiastic review, walks out on it in disgust, goes to the home of the critic (played by a real-life director, Carlo Mazzacurati), awakens him from slumber, and derisively recites the review’s hyper-intellectualized and experience-impoverished text aloud to him.

There’s one sequence, though, which cleverly combines loose rumination and subtle direction, and which serenely and joyfully invokes a grand cinematic idea. “Even in other cities, I only like to look at houses,” Moretti says in voice-over. “What would be great is a film just of houses. Panning shots of houses.” Then the camera car following him veers off the course of the Vespa to go down another street and film buildings, exactly as Moretti suggests. For the next minute or so, that’s just what viewers see: shots of apartment buildings, recorded with a camera moving past them, as if seen from the perspective of a motorcyclist looking off (dangerously) to the side. The alluring images, along with Moretti’s plainly loving recitation of the neighborhoods where the buildings are found and the years of their construction, evokes the urbanistic version of Rousseau’s solitary walker, eliciting a delight in the daily experience that is exalted by the passerby’s gaze.

Moretti’s fanciful sketch is matched by a pair of New York City-based short films (or, rather, clips) that Anthology Film Archives is offering, for free, on its Vimeo channel: undated, silent outtakes, from decades past, by the filmmaker Lowell Bodger. The two clips are also untitled and referred to on the site as “[NYC—Downtown]” and “[W 8th Street Heading West].” The former, which runs about eleven minutes, appears to date from the early sixties. It’s shot in a sombre black-and-white palette and seems to have been filmed largely in the early morning. Its first, and by far its best, sequence shows Astor Place and surrounding streets, with an emphasis on the dramatic urban vistas that the area’s avenues offer and the heavy majesty of the buildings that hulk around it.

The streets are shadowed, passersby and cars are scant, and Bodger gives the impression of focussing on the emptiness of the square and the open breadth of the streets as much as on their contents—vistas that are now occluded with modern skyscrapers. He pans past buildings that no longer exist (such as a low-slung one at the square’s southern border) and long-vanished storefronts (the Astor Place Luncheonette, Astor Neckwear). He shows street furniture, such as traffic signs on poles held in place by rickety cement-bucket bases, and streetlights and traffic lights and street signs in vanished ornamental styles. The latter clip, “[W 8th Street Heading West],” is a single take, seemingly made (judging from cars and clothing) around 1970. A roving, jittering shot, done in color, it shows Bodger pushing through knots of daytime strollers. His camera captures plaid pants and bell-bottoms, longer hair on men and mod styles on women, along with the signs and logos of shops and restaurants that are also long gone (Experiment One, Mr. Waffle, the Stag Shop, and the Kramer Jewelry Studio, with its psychedelic swirls), as well as a huge billboard dominating the view at Sixth Avenue.

Where Moretti roves through Rome with a more abstracted sense of swaths of time layered thickly in the present (a tone that rises to philosophical heights with an extended concluding tribute to the filmmaker Pier Paolo Pasolini, realized with a simple yet deeply moving ride to the site where he was murdered), Bodger distills immediate experience into emblematic details. What Bodger films, above all, is what there is in an ordinary glance at city life, for that glance itself is a matter of history on the wing. The clips are a reminder, above all, of the extreme difficulty of knowing what one is seeing, whether while filming or even just while walking in the city—because the thick curtain of habit and familiarity gets in the way.

These films’ nostalgic charm has a particular poignancy right now, when urban public life is thin, passersby are sparse, and many retail businesses are in danger of vanishing owing to the economic fallout from the coronavirus pandemic. The shutdown is a similar threat to filmmaking: even if Hollywood productions are preparing to relaunch, with elaborate and expensive sanitary measures meant to keep cast and crew safe, independent filmmaking will be unlikely to absorb the extra costs of such measures, and may stay shuttered much longer.

Yet every smartphone is a movie camera, and, if the shutdown of productions can do anything at all for filmmakers, perhaps it will restore to them the practice of using their cameras as sketchbooks, filming what’s at hand and what’s in the street with a diary-like impressionism. Far too much of the ostensible process of filmmaking is shunted to filmmakers writing and refining scripts, and far too much of the image-making process is relegated to the visualization of dramatic characters. The current crisis offers an opening to film the public spaces that are menaced, to preserve the sights that may vanish. If the shutdown of production lets directors take back images with hands-on work—and pushes them to pierce the curtain of familiarity to see and record life anew—then the reopening, when it happens, may well be no mere return but a leap ahead.