What to Read and Stream: The Remarkable Out-of-Print Book That Inspired “42nd Street” 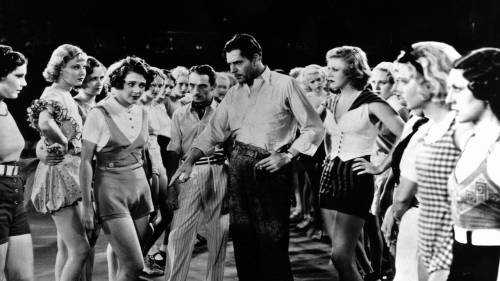 “42nd Street” rescued the musical genre, which had been done to death in the early days of talking pictures. With three spectacular production numbers, the film captured the first full flowering of Busby Berkeley’s geometrical and symbolic, and macabre and erotic, imagination. But for the bulk of the movie, “42nd Street” is a dramatic comedy of backstage life, chronicling the making of a Broadway musical called “Pretty Lady.” “42nd Street,” which was released in 1933, is a Depression story, in which a pair of producers, Jones and Barry, somehow get the money to hire the visionary director Julian Marsh (Warner Baxter) to stage their show. With the help of a dance director named Andy Lee (George E. Stone), he assembles a chorus that features the naïve young newcomer and top-flight tap dancer Peggy Sawyer (Ruby Keeler). When the Broadway grande dame Dorothy Brock (Bebe Daniels), who’s supposed to head the cast, drunkenly breaks an ankle the night before the opening, Peggy is plucked from the chorus and thrust into the lead role, and her triumph (as seen in the Berkeley numbers) marks the show as a hit.

This story, scripted by Rian James and James Seymour, is based on a novel by Bradford Ropes, published in 1932, and long out of print. It has apparently never been reprinted: I stumbled upon a cheap copy at the Strand three years ago, but other copies sell on eBay for four hundred and ninety-nine dollars and more. (It’s also online.) I’d never read my copy until recently, when TCM announced a daylong tap-dance series, on May 11th, in which the movie is featured. (The movie is also streaming on a variety of services.) Though the novel is satisfyingly plotted and page-turningly suspenseful, Ropes’s sense of prose ranges from awkward to purple, his sense of psychology is simple, and his view of context and power of analysis are stunted. Nonetheless, the book is fascinating, because it reads less like a novel than like a documentary about the lives of New York’s theatre people and, above all, about the practicalities, the personalities, and the sexual politics that go into the making of a show. In the sharpness of its incidents and the variety of its copious dialogue, it brings the era and the milieu to life in a way that no movie I’ve ever watched and no nonfiction account I’ve ever read has done; it the ring of authenticity, the force of direct observation and conversation.

In the novel, Peggy is a newcomer making her début, but she’s not naïve, as she is in the film: Ropes presents her as a New England minister’s daughter, sensible and principled, who—unlike the movie character—isn’t much of a dancer but possesses an air of unpretentious natural dignity and cultivation that distinguishes her from the run of hard-boiled “hoofers” dancing alongside her in the chorus. (She’s also determined and assertive behind the scenes, to great dramatic effect, in a way that the movie’s deer-in-the-headlights innocent never is.) Ropes is keenly sensitive to the fate of young women like Peggy struggling to make their way in the theatre. He depicts the casual pawings and salacious remarks and wolf whistles to which women are subject, and shows women pressured into sex with male directors and producers as a prerequisite—but no guarantee—for promotions. He’s also aware of the supporting role that women were expected to play in private, as in a comedic scene comparing Peggy’s dates with two admirers: Pat—in the movie an earnest actor and honorable gentleman who’s down on his luck, but here a rarely cast straggler and a gigolo, a self-described “male whore”—frames glorious and luxurious dreams of European travel and graceful leisure. Terry, a tough-talking yet tender-hearted dancer, dissects the production and its players in coarse but discerning terms. Peggy’s dialogue in both sequences, meanwhile, is reduced to “Yes, Pat” and “Yes, Terry.”

The dance director of the musical, Andy Lee, is a serial philanderer who usually targets the women in his employ—and Peggy is warned about him by two women who are veterans of the chorus and who befriend her (their whisper network is a crucial form of solidarity). One of them advises her that it’s safe to accept his invitation to lunch but not to dinner: “ ‘But can’t a girl eat supper with a man without becoming immoral?’ Peggy inquired. ‘She probably can, but it isn’t worth the trouble because no one will believe her.’ ” (In the same scene, the other experienced chorus member tells Peggy, “I always see the shadow of an abortion hanging over every corsage I pin to my swelling bosom.”) Later, another actress talks of Andy’s conquests:

“I hear old Lily Lowbottom, Andy Lee’s girl friend, ran around with
Hughes for a while.”

“Oh, about five abortions ago.”

Yet Andy is presented as a notable figure of paradox—a skillful and original dance director, despite his crude ways, who was formerly renowned as “probably the greatest dancer the Ghetto had produced” (the “Ghetto” is the Lower East Side). A scene of Andy demonstrating a dance suggests, discerningly, the cultural appropriation that was at the core of American popular theatre at the time, as “he simulated the slow writhing dance of the Harlem negro”—along with the implicit condescension that the artful imitation entailed. “The slouch, the gaucherie of the Negro were reproduced to perfection. Each gesture of body and arms was one of a series of details which made the dance a masterpiece.”

In the novel, the producers of “Pretty Lady” are Abe Green and Si Friedman, whose “Semitic” identity Ropes sneers at throughout. Julian Marsh, the “Pretty Lady” director—not a tough-talking American, as in the movie, but an Oxford aesthete—is also involved romantically with a member of the company: Billy Lawler, the “juvenile” lead. The novel suggests that he got his role only because of his relationship with Marsh, whom he holds in the grip of erotic passion and, as a result, is able to manipulate into firing other young gay men in the company. (This relationship, and brief scenes involving another actor, Jack Winslow, who’s openly gay and describes himself, at a drunken cast party, as “a great big gorgeous camp,” have given the novel a place among several works from American gay literary history.)

Part of the appeal of the movie adaptation of “42nd Street” is its emphasis on the Depression as the reason for the obstacles to financing “Pretty Lady” and the poverty that struggling actors are enduring. Ropes’s “42nd Street,” however, is a historical novel—it’s set not during the Depression but in the Roaring Twenties (seemingly around 1926 or 1927), when the stock market was still a path to easy money and “Scott Fitzgerald” is cited as the cynosure of the high life. Yet it’s a novel of poverty, of widespread economic despair—in the milieu of actors—at a time of over-all prosperity. The novel’s characters live from payday to payday, with long layoffs between gigs and a constant fear of eviction and literal starvation; keeping food on the table is no metaphor but a literal and constant concern—and many of the young actors live in residential hotels in the Times Square area, with no kitchen, eating out for all their meals. A pair of young actors and roommates, Terry Neill and Harry Towne, have seventy-five cents between them. “I’m sick o’ the Automat,” Terry says. “Well, suppose we crash the Ritz,” Harry responds.

“42nd Street” is also a novel of Prohibition; it depicts the city awash in alcohol of dubious quality, with flasks and bottles being transported with impunity, speakeasies abounding, and, as a result, gangsters not only proliferating but making inroads into respectable society. The novel is filled with a tangy array of secondary characters, such the veteran vaudevillians Danny and Daisy Moran, whose diverging professional fortunes cause trouble in their marriage, the experienced chorus members Ann Lowell and Flo Perry, a crusty private eye who’s hired by one of Pat’s clients to follow him, and a young contortion dancer named Polly Blair and her tyrannical stage mother, whose machinations play major roles in the plot. There are also fascinating glimpses of some of the city’s various social settings, such as a fancy night club where arrogant young college boys with trust funds condescend to staff and treat chorus girls to fancy dinners, expecting sex in exchange, and the rowdy exuberance of bohemians’ gatherings in Greenwich Village.

Yet the crucial story of the novel is the world of the theatre, the nuts and bolts of rehearsals and stagings, the cultivation of the artistic element by the many personalities who contribute to it, and the hard-nosed practical wiles that it both demands and supplies. Much is made of the division between vaudeville—where actors travel the country on preplanned routes and do their routines three or four times a day—and so-called production, i.e., Broadway, where a company stays put and the actors, instead of doing their own shtick, follow the script and the stage direction, performing a mere eight times a week, and where the greater prestige comes with greater risk: if a play flops, the cast is likely to go unemployed for the rest of the theatrical season. (Ropes also offers noteworthy observations about the differing temperaments of the actors in the two fields.)

Ropes’s novel is filled with delicious and gaudy theatrical slang (starting with “the merry merry,” i.e., the chorus) and is spangled with proper names that need no footnotes; but, read in the age of Google, the book is nonetheless better without them, because the rabbit holes opened in looking the names up offers the reader an instant lesson in theatre history. There’s Joseph Leblang, the founder of the first cut-rate ticket brokerage, the forerunner of TKTS, and the Cherry sisters, who were famously bad. There’s Hope Hampton, a beauty queen turned actress, and Georgie Price, who gave up a celebrated stage career at its height over a contract dispute. The book’s many salacious incidents, and its over-all candor about the desperately feral struggles for bare subsistence, also offer a lesson in the bowdlerizations and sentimentalizations that were Hollywood’s stock in trade, a vision of the vast collective propagandization that the rise of the movie industry brought about, through censorship and also the sheer mercenary drive to gull audiences into seats. The artistry that Hollywood brought forth is glorious and undeniable—and expression through style in the face of colossal restrictions and exclusions may be its greatest product. The Busby Berkeley routines, with their riot of erotic symbolism and rampant violence, bring out in abstractions what the drama could not; it’s no surprise that it took coteries of cinephiles to discern the art in studio movies. (The novel would make an ideal basis for a closed-end TV series—it should include everything that’s in the book and many things that aren’t.)

I haven’t been able to uncover much about Ropes, besides the fact that he was born in Boston in 1905 and died in Wollaston, Massachusetts, in 1966, and that he seems to have made the performing arts something of a specialty: his novels “Stage Mother” (1933) and “Go Into Your Dance” (1934), also backstage stories, were also made into movies soon thereafter. According to a review by Beatrice Sherman in the Times, from 1934, of the latter novel,

Bradford Ropes lives and breathes and does his writing in the
atmosphere of the show business. He has toured the vaudeville
circuits, danced professionally at exclusive night clubs, and, still
under 30, shares the stagestruck youngster’s intoxication with the
theatre. He has the Broadway patter of hoofers, actors and producers
down pat.

To which I can only add: and how!