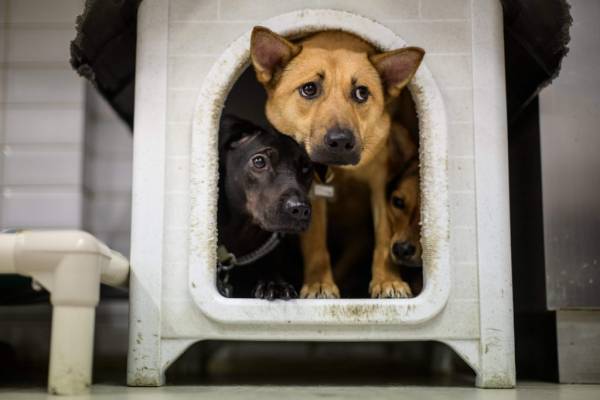 The COVID-19 virus has turned us into a nation of Momos. Momo is my old rescue dog. She has BB-like pellets embedded under her skin. She jumps at noises and shivers uncontrollably when I pull my belt from my pants at night. She invents new fears all the time—out of nowhere today it was a spray can rattle; last week it was the coffee machine beep. Momo never gets back to normal.

I don’t think most dogs are self-aware enough for suicide, but Momo might be. Before we got the right kind of leash, she would slip off and dart into traffic. There were some close calls. For a dog afraid of everything, she has no fear of being run over. So you tell me, because one definition of suicide seems to fit: fearing the consequences of living more than those of dying.

Momo knows there are bears in the woods. But her fears have gotten the better of her and she can’t separate the real dangers from the rustle of leaves in the wind. Soon enough, the grass near the woods has gotten too close and before you know it’s better to just stay on the couch, alongside the rest of America.

We have all been practicing to be Momo. With 9/11, we took one terrible day and turned it into a terrible decade. There were real threats: we all saw the Twin Towers fall. But then we faced a collection of bumbling terrorists with underwear bombs that didn’t work and shoe bombs that didn’t work and dirty bombs that never existed, plus of course the handful of successful homegrowns closer to disgruntled and mentally ill than Islamic and jihadi. If things to be afraid of didn’t exist, we would invent them. That might help explain how fast all that terror stuff just kinda faded away when it wasn’t needed anymore. ISIS who?

Before that, we convinced ourselves of other threats abroad that needed lashing out at. (Momo has never snapped at anyone. It’s a flaw in this analogy.) That is handy, the lashing out justified by fear, because it means we don’t have any obligation toward self-examination for killing millions of civilians, torturing people to madness, upending nation after nation, yadda yadda. We were scared, you guys! Sure, maybe we’re a little embarrassed for jumping under the table mid-Iraq war when Mom dropped the plate in the kitchen, but nobody is going to tell the US of A it wasn’t justified at the time.

We entered the Age of Trump in the worst of circumstances. Not only were we Momo-ized by 15 years of color-coded smoking guns being a mushroom cloud (and kudos to the author of that Bush-era catchphrase for the retro invocation of the Cold War), we had honed social media to allow Momos across the country to encourage each others’ fears. “Hey, you guys afraid of the smell of pencils? I’ll just leave that here.”

We reprogrammed into one big Crisis News Network, with every story reported with a flashlight held under the announcer’s chin. It seemed as though we needed to be the victim, a nation of special needs people who all have to board first. If you live every day certain you’ll die if they serve gluten, it is easy to get spooked about something that’s actually real. And don’t forget how overprotected we want to be, wiping down the gym like we’re prepping for surgery, reading trigger warnings, dressing like cosplayers with ineffectual soggy cloth masks. This fetish of imagined fears doesn’t stop reality so much as it leaves us poorly prepared to deal with it.

Then we get this Trump guy as a Bond-level super villain who was going to end democracy, make us speak Soviet, send the economy into a tailspin, and trigger wars with China, Iran, and North Korea when he wasn’t trying to make peace with them (which was somehow just as dangerous). Anyone who wasn’t a Nazi was a Russian bot. Social media allowed us to micro-personalize fear. Trump was going to end my rights (LGBT, abortion, something about toilets, guns, religion, concentration camps, fill-in-the-blank based on what is hiding under your bed). We could have signature fears.

You can actually watch it happen in real time. Over on Twitter, people recently noticed that Trump had retweeted something about liberating Michigan, and using their online law degrees, they determined this to be the crime of “inciting violence.” A dozen others then tattled to Twitternannyman @jack saying Trump should be banned to save us all. That brought out the historians who decided Trump was trying to start a civil war, which was the trigger for the constitutional experts to demand that the 25th Amendment be used to remove Trump from office that afternoon before the war began. From a retweet to the apocalypse in under three minutes. UPDATE: Nothing happened. All the fears were pointless.

Still, Nothing Would Ever Be the Same Again, and that was just for mostly made up stuff. Now we have a real thing. Will we recruit Rosie the Riveter to beat the Nazis? No, we’ll just quarantine until our skin becomes translucent for lack of sunlight. The face of this is Karen telling someone self-righteously that they need to wear a yellow hazmat suit to Safeway or they’ll have her kid’s blood on their hands. People always find a new way to fear not enough—not enough tests, not enough ventilators, not enough beds, not enough food, whatever’s next. It doesn’t matter that the fatal shortages haven’t materialized yet. The virus could mutate! There’s a second wave coming! Best to stay tense, dog, you will never get back to normal.

C’mon, just between us, forget about Trump for a minute. Does a virus falling well behind super killers like car crashes and cancer really really really demand upending literally everything in our life? Shutting down schools? Throwing 26 million people out of work? Suspending our most basic rights? And if anyone says yes, explain why we didn’t do it for past pandemics like H1N1. Imagine George W. Bush deciding post-9/11 no one could go to work or school for “national security reasons,” that we could not protect all those locations from the terrorists or something. It seems silly in retrospect but we’re doing it today. We’re so afraid we no longer can distinguish between prudence and overreaction. It just seems easier to stay at home than to see if the woods really have bears in them.

We are somewhat lucky. The most powerful people in our nation just want money. Jeff Bezos has no inherent desire to harm us directly. We still have some value to him, as temporary workers until the robots come. A mild uptick in the market saw Jeff’s net worth leap $24 billion in one day. Fear is currency and profiting off the pandemic the new status symbol.

Politically, more luck. The next president has limited ambitions. Trump seems content thinking he’s in charge and busting chops, and Joe Biden’s ambition is to, um, something. They’re not the kind of people to really run with this fear thing. They seem content with the fear status quo, enough to make people compliant, but not so much that they end up chasing each other with pitchforks. But imagine a bad boy in charge like Dick Cheney or John Brennan, a strong man to protect us, an evil man who understands the power of fear.

I’ve been fortunate enough to live in a number of different countries. They have problems, sometimes serious ones similar to ours. But they don’t seem to have Momo-ized, where they can no longer tell the real dangers from the shadows, or judge the right amount of caution from the panic that shuts down the point of living.

Maybe this is because less is uncertain for them. Most have health care, social safety nets, pensions, day care, stuff like that. Their people start the day worrying less in general than most Americans. Maybe that has something to do with this. For now, it’s hard to feel excited in a nation of paranoid agoraphobics passing their remaining time slathered in Purell scolding their neighbor for forgetting his mask when out walking Momo. It’s not a healthy way to live.

Peter Van Buren, a 24-year State Department veteran, is the author of We Meant Well: How I Helped Lose the Battle for the Hearts and Minds of the Iraqi People, Hooper’s War: A Novel of WWII Japan, and Ghosts of Tom Joad: A Story of the #99 Percent.

Previous : UK Defence Minister Shares Personal Struggle with COVID-19, Says ‘China Needs to be More Open’
Next : How Norman Rockwell’s America Would Have Survived This