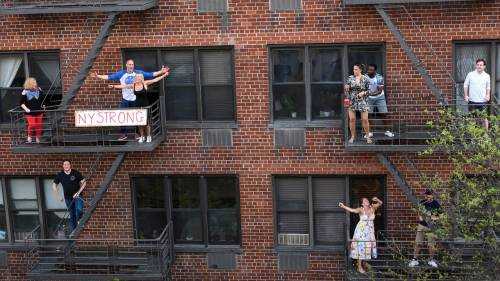 Before the coronavirus pandemic, Matthew Beck was a street photographer. “I spent a lot of time roaming around New York City with a camera, taking pictures of everybody,” he said. He considers a throughline of his work to be the “shared humanity” of people, even if they’re strangers. Now, with the world on lockdown, this shared humanity is both more apparent and less accessible than ever before. Confined to his apartment, Beck wanted to find a new way into the lives of others in his neighborhood of Morningside Heights, in Manhattan. He started leaving flyers on the doors of the buildings across the street from his, soliciting interviews from other residents of Claremont Avenue. After seeing one woman every day during the 7 P.M. cheer, he yelled out to her, and they exchanged phone numbers by signalling with their fingers. His new documentary, “Shelter in Place,” is a quiet, contemplative look at the inner life of isolation, made up of the conversations he had with his neighbors, in which they spoke to him on the phone from their windows, while he filmed them from his. The street, previously his creative domain, became the gulf that he crossed with his work.

The New Yorker’s coronavirus news coverage and analysis are free for all readers.

Beck set out to make something personal, to counterbalance the way that the pandemic is often portrayed in the news. “We keep up with numbers and stats and we are following graphs and stuff like that,” he said. “But what’s missing at the heart of all that is actual experience and people’s emotions and any kind of emotional processing of this thing.” His interview subjects speak freely and poignantly about their anxieties, their grief, and their utter uncertainty about the future. “I had a really bad dream last night, which was really scary,” one woman says. “I dreamt that I had to fly home, and I didn’t know where home was. And I had all my things, I had to pack them really really quickly . . . and I had to make the decisions: What am I going to take with me? Am I ever going to see that again? Feels so much to be out of control.” Beck said that his neighbors were more candid than he was used to. “I had a hunch that people needed to talk a little bit. Because I needed to talk a little bit,” he said.

These conversations invite a sense of communion but also of claustrophobia; there is both too little to talk about and too much. It’s a feeling that Beck mirrors with his cinematography. He shot “Shelter in Place” in portrait orientation, mimicking our limited portals to the outside world in this time: the window and the smartphone screen. He also filmed with a long lens, zooming in tight on his subjects from afar. By pairing this voyeuristic image with the close, confiding voices of his neighbors, he creates a disarming effect, one that captures a central paradox of this experience: that our aloneness is shared.

A Guide to the Coronavirus

Previous : The Best Television Shows to Stream Now
Next : Right at Home: What’s new and notable in outdoor grills