Using face masks and sanitizer, couples say ‘I do’ in Vegas 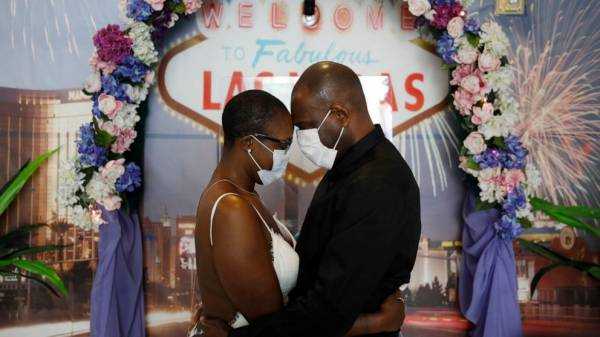 LAS VEGAS —
The bride wore a white beaded dress and a white cloth face mask that said “Mrs.” in curly black letters. Her new husband, dressed in black, wore one that said “Mr.”

Vaughan Chambers and Alicia Funk put the face coverings on shortly after they exchanged vows and kissed in front of a neon-lit sign in a Las Vegas wedding chapel and posed for photos with an Elvis impersonator who officiated at their wedding.

The Chicago couple had put their wedding plans on hold in March because of the coronavirus. But when they realized it would be a long time until they could gather friends and family for a celebration, they decided to go ahead..

In early May, they invited a handful of close friends who live near Las Vegas — the self-proclaimed “Wedding Capital of the World” — and bought cheeky face masks for the nuptials.

“It’s really nice to have something good in the middle of all of this bad,” Funk said.

For couples getting married in Sin City’s famous chapels, the vows they make to love each other “in sickness and in health” take on fresh meaning in the time of the coronavirus.

Brides and grooms sanitize their hands and get their temperature checked before walking down the aisle. Guests are rare and typically don face masks. And drive-thru weddings are more popular than ever.

The few guests who can attend ceremonies keep their distance. Other loved ones who can’t attend sometimes watch via videoconferencing.

Funk and Chambers are among more than 1,500 couples who have been issued marriage licenses in Las Vegas since the county clerk’s office reopened on April 27 after closing for nearly six weeks to slow the spread of the virus.

“We’re seeing a lot of the kind of traditional, old school elopements with just the couple,” said Melody Williams, executive director of chapel operator Vegas Weddings. “They’ll get back to their big to-do at a later time.”

With new safety protocols calling for masks and social distancing at weddings, the clerk’s office is issuing about 72 licences a day — well below the 200 typically issued before the COVID-19 outbreak.

Many of those newlyweds prefer drive-thru ceremonies — a speedier service that some chapels were offering long before the coronavirus emerged and businesses began moving transactions outside to keep customers safe in their cars.

Williams said her 15-minute drive-thru service is the easiest option for couples that want to marry quickly.

“It’s contactless,” she said. “We still try to make it a nice, elegant ceremony as best we can.”

Couples can work in personalized vows or a scripture reading and get a video recording of the service, and chapel staff hand out a long-stemmed rose to the bride.

Many couples have been scrambling to find rental gowns or tuxedos because the clothes they initially planned to wear may have been stuck in transit or at a shuttered alterations shop.

That’s what happened to Jennifer Escobar and Luz Sigman of San Francisco, who decided to pick replacement wedding outfits from their closets.

They initially planned to marry on May 8 — a date they had engraved on their wedding bands and hoped to keep. But when they couldn’t find a county clerk’s office closer to the Bay Area that would issue a wedding license, they decided to make the 11-hour drive to Las Vegas.

Escobar’s sister and niece who live in Las Vegas joined them for the ceremony, wearing face masks as they watched the special moment.

“Everything got canceled but at least we still got to do this,” Escobar said.

Escobar said she and her new wife hope to have a reception in October with more family and friends. They’re considering making it a masquerade party.

Previous : Congress acted to save the airlines. One senator asks: What about child care centers?
Next : Brighton chief executive says players must feel confident about safety