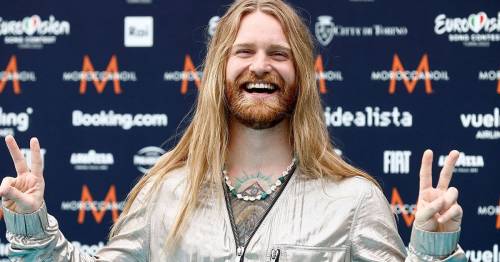 Sam Ryder will be representing the UK at the Eurovision Song Contest in Italy this year, with him set to perform in the annual competition's Grand Final over the weekend.

The singer-songwriter, 32, will take to the stage at the Pala Olimpico Arena in Turin during the live broadcast on Saturday (May 14), with him performing his entry Space Man.

The song has already amassed millions of streams and is one of the bookies' favourites for this year's contest, with Sam in with a chance of being the first UK winner since 1997.

He was however recently asked whether he's taking a lucky charm to the competition to provide a little bit of help in his quest for victory against the other participating acts.

His entry, Space Man, is one of the favourites this year
(

When asked whether he had any rituals or 'lucky charms,' he teased that keeping his lustrous long hair on top form is important. He said in response: "Is hairspray a lucky charm?"

Sam rose to prominence during the first lockdown with his renditions of popular songs on social media platform TikTok, with him having garnered more than 12 million followers.

He's revealed that although he was receiving significant attention with his account, it was after writing Space Man – his entry for Eurovision – that labels "offered [him] deals."

Sam will perform in the Grand Final on Saturday night
(

Sam said that the track has "sort of elevated everything to the next level," with him excited to perform it at the Grand Final. He's now trying to get "into the right headspace for it".

The performer recalled watching Eurovision with his family when he was younger, with him commenting that it was "always such a joyful time" watching the iconic contest.

Sam won't compete in the semi-finals – tonight (May 10) and Thursday (May 12) – as the UK automatically qualifies for the Grand Final as its one of the highest-paying entrants.

Scott Mills, 48, and Rylan Clark, 33, will give commentary for UK viewers during the semi-finals. They will air tonight and Thursday from 8pm on BBC Three and BBC iPlayer.

Graham Norton, 59, will return to commentate throughout the Grand Final. This will be broadcast on Saturday (May 14) night from 8pm on BBC One, Radio 2 and iPlayer.

Previous : How did Holly Barton die in Emmerdale, and how did Suzy know her? Plot revisited
Next : Queen ‘proud’ of Charles and William stepping in but ‘very much’ in charge, sources say