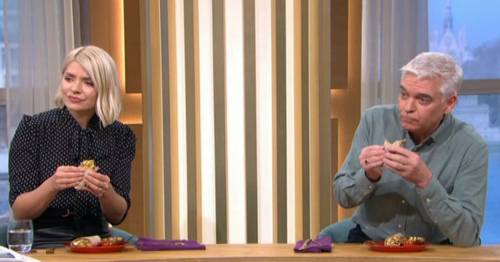 This Morning viewers have slammed a “healthy twist” on the classic chip butty showcased on the cooking segment of today's daytime show.

ITV ’s chef Nisha Katona was in the studio to make a chip butty with a “twist”, which involved swapping the slices of bread with a wholemeal wrap.

Host Holly Willougby, who returned to the programme this week alongside Phillip Schofield after an extra long festive break, said she could convince herself the take on the chip butty was “healthy”, since it’s in a wrap.

Nisha joked that when you deep fry something, “it’s almost like steaming it”.

The potatoes were coated in turmeric before being deep-fried and placed inside the wrap for a “wake-up snack”.

Nisha chatted with the hosts as she assembled the dish, saying: “This is about a potato that is cooked – it’s also really good with mash."

Phillip listened politely as he tucked into his wraps and polished off the lot.

Nisha continued: “Honestly, if you ran mash up a chapati with these ingredients, it’s going to taste incredible.”

However, This Morning viewers were less than pleased at the “healthy twist” on the classic British butty.

One viewer of the daytime show took to Twitter to write: “The only thing it has in common with a chip butty is it started as a potato.”

A second tweeted: “Its not my kind of chip butty.”

Another viewer posted a GIF of a man shaking his head with the caption: “Messing with a chip butty this much.”

A fourth viewer was equally displeased with the “twist” on the British classic, writing: “No point calling it a chip butty. It’s hardly with a twist. You’ve just changed the whole thing.”

Phillip polished off the lot.
(

During a discussion of menopause earlier in the programme, Holly Willoughbyopened up about her 'fears' of entering the next stage of her life.

In an eye-opening discussion with TV presenter and model Lisa Snowdon, 49, Holly admitted that she was hoping to find out all the information she needed to know ahead of that stage in her own life.

The proud mum-of-three revealed that she held certain 'fears' about 'the changes' and asked Lisa to share some wisdom from the former Britain's Got Talent star's own experience.

Holly said: "This is my next phase of life. This is coming to me and I want to go into this without being fearful.

"And I think the best way of doing that is to listen to other women, to hear the stories and to educate myself and learn. So, I want to hear your story and what your symptoms were then."