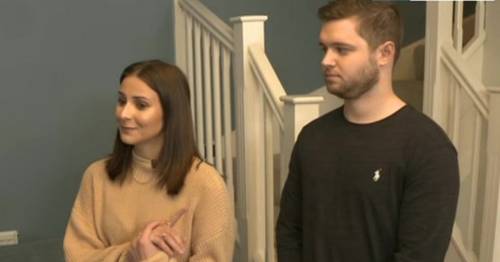 This Morning fans were left divided during Thursday’s instalment of the ITV show after a desperate viewer sought the help of The Speakmans.

When This Morning viewer Amy was introduced to audiences at home, they couldn’t help but feel she was being a ‘bit dramatic’ about her fear of spiders.

The interesting segment saw Amy tell the therapists that her life is put on hold whenever she sees a spider amid her crippling fear, and her boyfriend has to always be on call to come and kill the creepy-crawlies.

Lifting the lid on his spider killing duties, Amy’s boyfriend told the Speakmans that he’s always on high alert, and always has his phone close to hand so he can rush to help his girlfriend.

“I’m always on high-alert. If there’s a spider in the room I have to catch it,” he explained.

“I have to then show Amy that I’ve actually caught it. And that I’ve chucked it outside as far as possible. She’ll still be tense though for a while after.”

Amy’s boyfriend went on: “I’ll always have to check then if she’s alright.”

This Morning therapists Eva and Nik went on to test just how severe Amy’s phobia is.

The pair planted a giant toy spider in front of her face to gauge her reaction, and it didn’t go down well.

Amy visibly shivered in fear as she told the experts that her neighbours have the exact same toy that they leave outside on their tree all year long.

The terrified guest told Nik and Eva that when she brings her dog out for a walk, she purposely avoids walking past the house because it triggers her too much.

Following Amy’s appearance, This Morning viewers took to Twitter to share their thoughts – with some calling her ‘overdramatic’.

“This girl has her boyfriend on speed dial to kill a spider. Did she ever hear of squashing it with a shoe? Talk about overdramatic,” one viewer complained.

“OMG! My boyfriend wouldn’t even come to help me if I was on deaths door. This boy is whipped,” another quipped.

A third viewer commented: “I understand being afraid of spiders and insects but this just seems too much.”

Meanwhile, a fourth defended: “I’d be the exact same, without the exception of having a boyfriend to kill them for me. But spiders are the worst.”

This Morning continues tomorrow at 10AM on ITV.

Previous : Signs Robert Webb was going to quit Strictly as comedian exits due to ‘ill health’
Next : Emmerdale drops chilling clues about who dies in stunt week in eerie ‘foreshadowings’