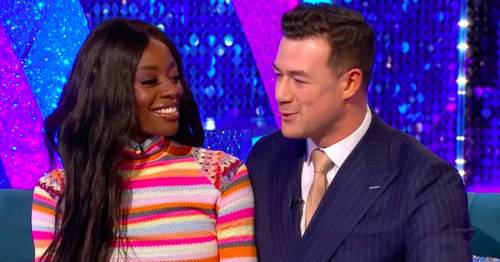 The pair appeared on the latest instalment of It Take Two, and host Janette wasted no time in showing a clip of their performance last week.

AJ and Kai wowed the judges with their American Smooth routine to Whitney Houston's hit 'I have nothing' – which featured in the movie The Bodyguard.

At the end of their performance, Kai was heard saying to AJ: "Awwwww I love you, I love you so much," as the pair embraced on the dance floor.

Before showing a clip, Janette said to them: "Speaking of romance and the characters, you were both saying you wanted to bringing romance to the floor and I think you really did because Kai you said this at the end of the performance…."

Laughing nervously, Kai said: "Here we go," as the moment played out on the screen.

As the camera cut back to Janette, she continued: "It was happiness! Do you find that you're getting a bit of a deeper connection in this partnership?"

AJ and Kai both giggled and looked a bit uncomfortable as he replied: "I think that was all down to just the tough, tough week that we had and the fact that we got to the end of the performance and it was flawless and you smashed it, and you did all the lifts brilliant, did all the technique perfect.

"We were both just relieved, you were just gripping onto my neck!" he added to AJ.

It Takes Two viewers were quite stunned that Janette had asked the question and took to Twitter to comment.

"Janette just going straight to the point on the romance rumours <3 #ittakestwo #itt," one person posted.

Someone else pointed out: "AJ and Kai didn’t deny those rumours did they! and Kai got all flustered bless him! I am here for it! Love AJ #SCD #ItTakesTwo #ITT."

A source previously told The Sun that AJ is falling for her dance partner more week on week.

They said that cast and crew are even placing bets on the pair hooking up and becoming the first romance of the series.

The source said: "Everyone backstage is talking about the sparks flying between AJ and Kai. It’s very passionate and intense whenever they’re together.

"They’re both single and have really hit it off and everyone on the show is saying it’s only a matter of time.

"They’re always laughing and flirting — romance is 100 per cent on the cards.

"Kai is totally AJ’s type. He’s got loads of banter and he’s been blown away by her, too."