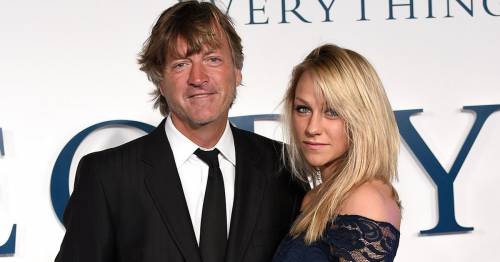 Richard Madeley 's daughter has claimed the I'm A Celebrity…Get Me Out of Here! star is livid he can't return to camp.

The Good Morning Britain presenter was forced to quit the ITV show, despite being "absolutely fine", due to strict Covid restrictions.

The news of the broadcaster's exit came just hours after it was revealed that the star had temporarily left the castle for hospital treatment – therefore breaking the campmate's Covid bubble.

Speaking via her Instagram Stories on Thursday afternoon, Chloe Madeley thanked fans for their messages of support following the confirmation of her dad's departure.

The fitness guru, 34, shared Richard's statement with her 237,000 followers before going on to add her own thoughts about the situation.

"Thank you for all your lovely messages," the youngest daughter of Richard and wife Judy Finnigan began her statement with.

"Dad's absolutely fine, we've been speaking to him all day and ultimately, he's just livid he can't go back into camp because of Covid restrictions."

Richard Madeley's exit from the ITV show was confirmed on Thursday
(

She added: "He did himself proud, though. He worked hard and was his calm, collected, kind and funny self."

"We are so proud," she sweetly concluded with.

Richard, 65, also issued a statement on his early exit from the Welsh castle to his fans online.

Sharing a promotional snap of himself in his I'm A Celeb gear, the presenter stressed that he was feeling fine, despite his trip to the hospital.

"Hello all!" the star began his first statement since leaving the castle with.

The TV presenter with daughter Chloe Madeley in 2014

"Richard here – firstly just to say that I’m absolutely FINE. I started to feel briefly unwell in the small hours of the morning and was taken to hospital as a precaution.

By leaving the camp, I had consequently broken the Covid ‘bubble’ and as such I’ve had to leave the castle and all the wonderful celebs that remain in the camp."

He continued: "Obviously I’m gutted to be leaving so soon but the safety of all the campmates is the number one priority. I’m incredibly excited to watch their journey continue…even more so at the prospect of being somewhere a little warmer than Gwrych Castle."

"Thank you to everyone who supported me on my brief but completely unforgettable adventure – I’ve made some great friends and honestly had the time of my life."

Earlier today the TV presenter was seen by an on-site medical team before being admitted to hospital as a precaution.

A spokeswoman for the Welsh Ambulance Service said: "We were called at 05.43am this morning, Thursday 25 November 2021, to reports of a medical emergency at Gwrych Castle in Abergele, Conwy.

"We sent a paramedic in a rapid response car and an emergency ambulance to the scene, and one patient was taken to hospital."

An ITV spokesman said: "Richard was unwell in the early hours and was immediately seen by our on-site medical team.

"He's since been taken to hospital as a precaution; the health and safety of our campmates is our priority."

Previous : I’m A Celeb confirm no one will enter ITV show as stand-in following Richard’s exit
Next : Why Richard Madeley had to leave ITV’s I’m a Celebrity despite being ‘absolutely fine’