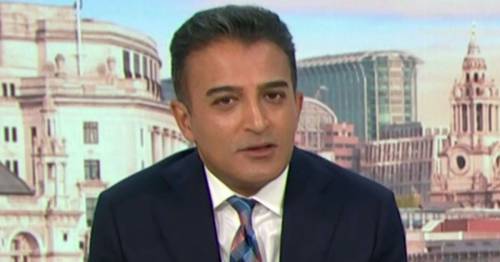 Former CBBC presenter Reggie Yates made an appearance on Wednesday's Good Morning Britain to discuss his directorial debut movie, Pirates, about a group of teenagers trying to celebrate New Year's Eve in 1999.

Pirates is also a celebration of UK garage culture.

It is a coming-of-age film directed by Islington-born actor and documentary maker Reggie, 38.

When welcoming the director onto the show, Adil dived straight into his movie and mentioned how it 'breaks down stereotypes'.

He said: "I love the fact that you literally, you're breaking down the stereotypes, haven't you? We, you know, we think of a movie about black kids and it's sort of gangs and it's gangsters and it's, you know, drugs and all of that."

"But there's none of that really. It's a coming of age story," he added .

Reggie Yates spoke to the GMB hosts about his new movie
(

Raising an eyebrow, Reggie responded: "Yeah, so it's a coming of age story fuelled by joy more than anything, and I think we've had more than our fair share of trauma filled issue-based movies."

Some viewers took to social media to criticise Ray for expecting a film about black children to be about 'gangs and drugs.'

"Did he really just say that about Black kids?" asked one.

"Talk about stereotyping at its finest," said another.

"Reggie's face said it all," observed a third.

Reggie then commented he felt as though he was 'having a conversation with his English teacher' as Adil and co-presenter Susanna Reid struggled to pronounce the genre 'garage'.

It is pronounced 'gah-ridge' as opposed to the usual 'ga-rah-ge' that the presenters used.

"I just want to put this out there. I feel like I'm having a conversation with my English teacher," Reggie told the duo as he spoke from his home in south east London.

Pirates follow three 18-year-olds as they come to terms at the end of their childhood and the change in their friendship as they head into university.

The three boys run their own garage group – The Ice Cold Crew (ICC) – which soon gains traction through pirate video.

Previous : Tesco will not sell poppies in all stores this year due to volunteer shortage
Next : Britain’s Got Talent’s Stavros Flatley star looks unrecognisable 12 years after show