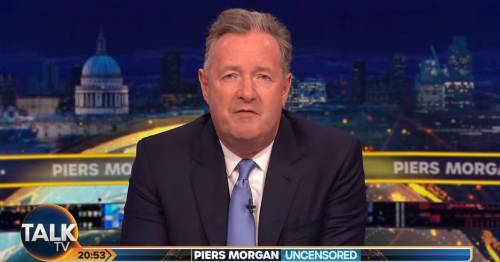 As ratings for his new programme plummet after a week on air, Piers Morgan has urged the nation to tune into the TalkTV show.

Episode one attracted 316,800 viewers with a clash between Piers and former US President Donald Trump, which saw the politician storm off from the interview after a heated exchange.

Posting a screenshot of a statement from Trump on Instagram, Piers wrote “[laughing emoji] Actually, Donald, it’s only just begun… thanks again for a great interview (+ratings!) – I couldn’t have wished for a better launch. When you calm down, let’s do it again.”

Following his premiere episode walk-out, Trump’s statement read “Ratings for the Piers Morgan interview with me were great!

“Unfortunately, after that interview, his show bombed completely because of the fake narrative he tried to portray.

“The fact is, I got a new close-up glimpse at Piers, and he no longer has what it takes. It’s over for him!”

Former Good Morning Britain host Piers has been frequently posting about his show on social media, with newspaper pages, posters, and even a clip from Gogglebox featured on his Instagram profile as he publicises his programme.

Despite still beating Sky News and GB News during its one-hour slot, even with the 80% fall in viewers, he took to Instagram again to encourage people to watch.

Will you be tuning-in to the next episode of Uncensored? Let us know your thoughts in the comments section below

Posting a press pic for the show depicting himself as half devil with horns, and half angel with a halo, Piers told his 1.8million followers there was "no need to feel so guilty" by watching.

Branding Piers "The nation's guilty pleasure", the poster gave readers all of the information needed to tune into the show, with a list of channel numbers, and the 8pm start time.

The brazen poster also featured the sub-heading “You know you want to”, encouraged further by Piers telling his followers he had “another cracking show coming up.”

Piers captioned his post "[Laughing emoji] No need to feel so guilty, Nation… give yourselves some guilt-free pleasure by watching @piersmorganuncensored tonight at 8pm! Got another cracking show coming up."

“Amazing achievement for a brand new show on a brand new network. Lots of work to do, but very encouraging. Tune in tonight at 8pm!”

Previous : Adorable puppy snatched from car in horrifying CCTV clip has This Morning fans in tears
Next : Gas leak blamed for explosion at Cuban hotel that killed 22 – World News