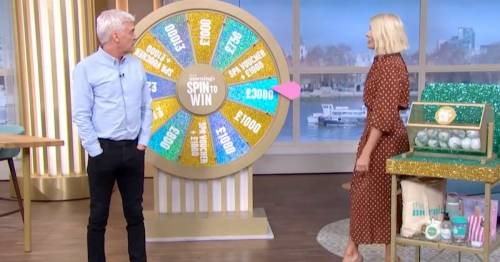 Phillip Schofield has dropped a bombshell about the This Morning studio backdrop.

The presenter spilt the secret on Thursday's programme during a segment of Spin To Win, where viewers can enter online for a chance to win some money.

Phil and his on-screen partner Holly Willoughby were talking on the phone to a contestant from Winchester when the conversation turned to the weather.

During the game, the guest told the hosts how "sunny" it was where they live.

Holly, who was gesturing to the studio window behind there, then told Phil: "Look out the window, Phil, it's beautiful out there!"

Holding back a laugh, Phil replied: "Should have done that, shouldn't I?

"So silly the fact that it was recorded about four years ago but there we go."

Yep, that scene in the background of the London skyline and the River Thames has been the exact same for years.

Three years ago, the show, along with Good Morning Britain and Loose Women, moved from the London Studios on the Southbank over to West London.

The sets for all three shows were rebuilt at their new home, and the screens you now see were used to replicate the river view the old studio used to have.

Some long-time fans of This Morning may have remembered this secret from the technical difficulties the studio faced back in 2019.

Eamonn Holmes and Ruth Langsford were hosting a segment on Hector the lurcher, who had been labelled Britain’s loneliest dog.

After being turned down multiple times, the show is doing its best to finally find Hector a home.

But mid-way through the conversation, the windows went black, leaving everyone at home stunned to discover the truth.

Previous : Philippines to acquire missile system from India for $375 mln
Next : Who has Meena killed so far in Emmerdale? Serial killer to face ‘judgement day’ soon