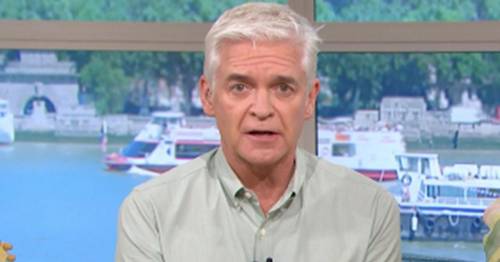 Phillip Schofield has opened up about experiencing 'very, very dark times' in relation to feeling suicidal.

During Wednesday's This Morning, Phillip and his co-host Holly Willoughby invited Shirley Ballas into the studio to discuss CALM's latest campaign.

Back in 2018, This Morning partnered with the mental health charity on an award-winning campaign – ‘Project 84’ – which created an important conversation around male suicide in the UK by installing 84 life-size statues on the roof of the ITV Tower.

‘Project 84’ highlighted the shocking reality that every week in Britain, 84 men take their own lives.

Sadly, four years later, the statistic has increased and This Morning revealed on Wednesday that they are working again with CALM – the suicide prevention charity Campaign Against Living Miserably – by backing a new campaign, which shines a light on the true face of suicide.

Viewers saw Gok Wan live from London’s Southbank where 50, six-foot-high photos have been installed, each one revealing a story of suicide and the heartbreak that follows.

Speaking about the images, Gok explained: "Everyone is smiling in these beautiful photos and everyone seemingly very happy, but the very sad news is that every single one of these people tragically took their own lives.

Gok Wan at London’s Southbank where 50, six-foot-high photos have been installed, each one revealing a story of suicide
(

"These were the last photos taken of these people, and the whole campaign is called ‘The Last Photo'."

Back in the studio, Holly and Phil spoke to Strictly Come Dancing judge Shirley, whose brother is one of the 50 images displayed on the Southbank.

"Seeing the exhibition and seeing my brother there just brought everything back twenty years ago," she told them.

"And if I knew, I could have helped in a much better way. Communication is key… he was the last person you would ever think would take his own life.

Phillip then opened up and explained how speaking to friends really helped him when he was feeling low.

"The key is to talk to people… I went through some very, very dark times and I leaned heavily on my friends – as Holly knows – so you have to talk to somebody, you can’t do it on your own," he said bravely.

Simon Gunning, CEO of CALM, explained why their latest campaign is so important
(

It's not the first time the father-of-two has opened up about his mental health struggles.

Back in 2020, Phillip revealed that he had sought therapy to help him come to terms with his sexuality.

His inner turmoil about being gay, led to him have suicidal thoughts and he told The Sun On Sunday : "I went to seek professional help, I sat down and poured out my heart.”

He added: "Whatever was ‘there’ I thought, ‘OK, whatever this is, you stay back because I am happy’.”

*If you are struggling with mental health, you can speak to CALM on 0800 58 58 58 or visit https://www.thecalmzone.net/get-support.

Previous : Love Island fans think newcomer Antigoni Buxton is the spitting image of 2019 star
Next : Brits brace for second day of strikes amid fears of more to come in just two weeks