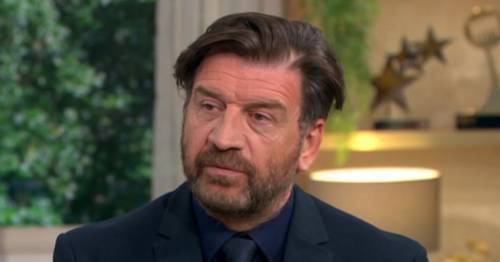 Nick Knowles has said that it was "odd" being replaced for an episode of DIY SOS last year as he described the situation as a "misunderstanding".

The 59-year-old presenter was replaced by comedian Rhod Gilbert for the charity special of the hit BBC series after he inadvertently broke rules to star in an advert for Nestle cereal.

Appearing on This Morning today with Dermot O'Leary and Alison Hammond, Nick was quizzed on how it had been taking a backseat for an episode.

"It was a bit odd but I knew that it was only for the one show," he replied. "It was basically a misunderstanding – we sorted it all out – but it meant that I couldn't do that one show. But then Rhod came in and Rhod Gilbert is such a lovely lad and he got emotionally involved with the whole story so I thought he did a great job.

"Tough for people to walk in on something like that but I think he did a great job."

Opening up about what it had been like to start filming again during the pandemic, he explained: "We were worried that when we came back after the pandemic – and we were actually filming at the end of the pandemic as things sort of loosened up a bit – that we would struggle to get building materials, it was difficult to get builders – people trying to make up the money they had lost.

"Still a massive, massive response. We have about 300 people on every build that we do and we do about £300,000 worth of work on each house. Huge amounts of materials. And we got everything that we needed and people are just as generous. We are a fantastically generous country."

Nick found himself in hot water over a Shreddies advert
(

"It's huge," Nick agreed. "And after everyone's forgotten who I am and forgotten who the programme is, there's a little building in Peterborough for little miracles that's looking after 15,000 kids with life limiting illnesses or disabilities, there's a street in Manchester looking after veterans, processing over 500 veterans through back into work. There's a garden on Great Ormond Street, there's a place called The Yard in Scotland that's doing great stuff… that'll carry on doing that."

Alison said: "What's amazing was that it was done in the pandemic. I find it very emotional watching this show anyway. I'm sure emotions run even higher the fact that it was in the pandemic, we couldn't see people. How did that work anyway on set?"

Nick is back with the DIY SOS team again
(

"It was difficult," Nick admitted. "I mean, we had to have armbands so people went to lunch, people worked in pods and units and had to observe all of the rules. It doesn't matter what we throw at people – they'll always turn up and keep going.

"One of the builds that we did this series was through one of the three massive storms that we had – if you remember – that we had in March; horizontal rain, snow, 70mph winds… we couldn't stop people. They just wanted to work.

"I'd walked up to a woman one day who was wheeling a wheelbarrow covered in mud in the pouring rain. I said, 'It'd be really good as a landscaper if you could come and join in' and she said, 'I'm a wedding photographer, I'm just pushing a wheelbarrow!'"

*This Morning airs weekdays at 10am on ITV