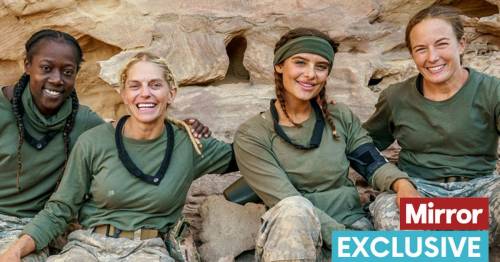 Who Dares suggest that women are the weaker sex!

A quartet of toughies show they are more than a match for the men as TV’s gruelling show SAS : Who Dares Wins reaches its climax tonight.

They are among nine men and women who face interrogators. Those who come through face a final day of challenges to see who, if anyone, passes the course.

But even tough inquisitors did little to faze two of the women.

Durham mum-of-two Paige Zima says she found the brutal questioning a TURN-ON, while Claire Alves said she even FELL ASLEEP.

Paige from SAS: Who Dares Wins
(

Claire from SAS: Who Dares Wins
(

So far, viewers have seen contestants gassed, abseil off a tower, plunge backwards into the sea and fight each other.

Mental torture is up next, in the interrogation phase.

But ex-dancer Paige, 26, reveals she coped fine – and took a shine to her captor, a hardman nicknamed Dilksy.

Single Paige said: “I thought that was quite fun in a weird way. I shouldn’t probably say this but I quite fancied my interrogator! He was like an evil villain but beautiful, I couldn’t stop staring at him. So fit!”

Londoner Claire, who survived an abusive relationship in her 20s, said: “I don’t mind people screaming and shouting at me. I had it abusively for years. None of that bothered me in interrogation.

"When I got laid on the floor, I actually fell asleep and I was so annoyed when they woke me up to move me into a new stress position.”

Cat Turnbull, 36 and Shylla Duhaney, 33, are also in the final stages of SAS, series seven, which has seen the best showing by women.

But each woman had to overcome their demons.

Cat, a search and rescue paramedic from Scotland, carries the memories of surviving Dunblane. She was off sick the day 16 pupils were murdered at their primary school by gunman Thomas Hamilton in 1996.

She also lost her dad and boyfriend in quick succession.

Cat said: “On the course you’re digging up past traumas you’ve dealt with, or at least I felt I’d squashed down. I wanted to challenge myself and see what I am made of. It left me broken.”

Shylla, who plays football for Berkshire side Maidenhead Utd, wanted to prove her anxiety disorder selective mutism would not hold her back.

She explained: “I was always scared, from a very young age, to express myself, or show weaknesses, so I just stop talking. Coming on the course, I wanted to show you can’t underestimate women just because we look smaller or might be physically weaker, or don’t speak up.

Cat when she was at school in Dunblane, where she was off school sick on the day of the infamous massacre

“It comes down to mental resilience and whether you have the strength to keep pushing.”

Paige, who gave up a career in ballet when she got pregnant, agrees, adding: “You could see a little spark within each woman and I think that was down to our own experiences and that hurt that we’ve felt in our lives.

“To be able to use that is fuel to get to that point. Something was driving us. I went into it knowing I would physically struggle. I’m not the biggest.

“I’m not the fastest. I was relying on my mental resilience. People have told me I won’t make anything of myself. I’ve been determined to prove them wrong.”