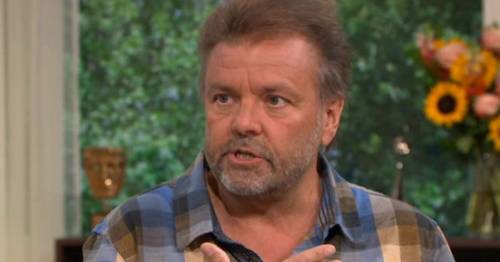 TV presenter Martin Roberts has revealed he plans to return to filming for Homes Under the Hammer in a few weeks, after his near-death hospital dash.

The star spoke to This Morning on Wednesday and confirmed his recovery could take months, and while he was taking it easy on the work front he would soon be back on the BBC series.

Last month, Martin was rushed to hospital and had to undergo an emergency operation, after chest pains and breathlessness.

His condition meant he could have had hours or minutes to live, after learning built-up fluid around his heart was stopping it from working – with him diagnosed with a cardiac tamponade.

Martin was rushed in for surgery and told he could have dropped dead from the condition, but he is now on the mend.

Speaking on This Morning on Wednesday, Martin and his wife Kirsty discussed his ongoing recovery, and said the health scare was a "reset" for them

Kirsty said: "We've said this, I did send a card to Martin when he came out of hospital and I said we do have to take this as a bit of a watershed moment.

"You're just gonna have to learn to say no because we both do, we always have lived life at 100 miles an hour and we very rarely stop to smell the roses as Martin would say.

"I think times like this you do start to realise what is important in life. There's gonna have to be a bit of readjustment."

She went on: "Even now in this recovery stage, Martin feels a little bit frustrated that he can't just go back to doing everything he was doing, and I said you know, the doctors have said actually this could be months for you to get back to that place, and it's gonna be a slow process."

On a return to Homes Under the Hammer, Martin said: "The team have been really great. I mean taking it easy, I will start filming again in the next few weeks, I've got to get to 20 years.

"So hopefully I will get some nicer properties and they'll cherrypick the good ones rather than the really bad ones."

Previous : Anne Hegerty wants to take on Prince Harry and Meghan on The Chase after royal discovery
Next : Dramatic footage shows £300,000 house collapsing into the sea during stormy weather