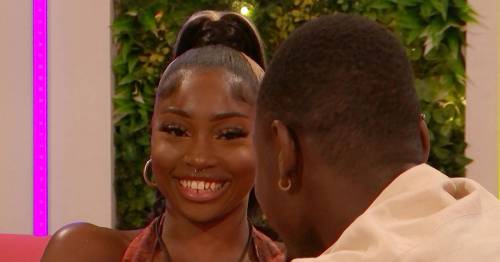 Love Island stars Dami Hope and Indiyah Polack have a deep discussion about love after expressing their feelings for one another.

During Monday night's episode, Dami and Indiyah confessed their interest in each other and it looks like things are quickly progressing.

In tonight's show, Dami asks Indiyah if she has ever been in love.

Indiyah tells him: "I feel I’ve had loads of love for someone but I don’t think I was 'in love'."

Dami then asks what it 'would take' for her to be in love with someone.

The hotel waitress admits there are 'a lot of contributing factors' for her to fall in love.

"I feel like if I’m with somebody and there is that slight feeling my head could be turned or I could have eyes for somebody else then that goes to show that I’m not in love," she answers.

She is exploring her 'spark' with Dami

Indiyah was originally coupled up with Ikenna Ekwonna after the public chose for them to be together.

During Monday's shake-up, the couple broke up after two weeks together and had a chat about where they stood.

She said: "I wanted to catch up with you and just have an open and honest conversation about how you actually think we are?"

Indiyah continued: "Obviously I know we’ve been in here for like two weeks and we’ve been getting to know each other but an observation from me, I feel like I should know more about you and we should connect more.”

Ikenna then asked: “So you feel like there’s something missing?” to which Indiyah answered: “Yeah, but I don’t know if you feel the same way?”

She was previously coupled up with Ikenna
(

Ikenna went on to tell Indiyah: “Do you know what I’ve noticed as well that you and Dami get on.”

As Indiyah went to the pool to tell the girls what had happened, Ikenna retreated to the sunbed alone to process the conversation.

The night before, Dami spoke to Indiyah about the 'spark' between them.

He asked: ‘Do you feel like we have a connection? Like we’ve ever had a spark? Would you like to explore it? I’m actually open to exploring you. I feel like with you it’s easy for me.’

Indiyah then responded to him: "We bounce off each other."

Previous : Love Island’s Gemma Owen ‘offered to star in reality show about footballers’ daughters’
Next : “Beba” Is an Intimate Self-Portrait and a Grand and Mighty Drama