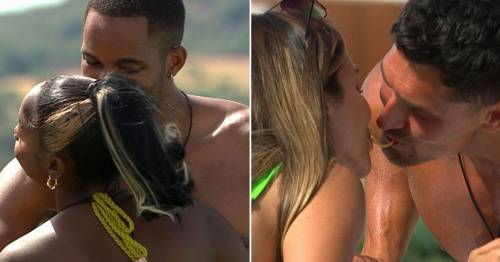 Things will heat up in the Love Island villa – as the two bombshells get grafting straight away.

Jay Younger and Remi Lambert are already causing some drama, just moments after they enter the ITV2 show villa, keen to get to know all the Islanders and make a ploy for love with one of the girls.

Instantly, Remi sets his sights on Indiyah Polack, who is currently partnered up with Ikenna Ekwonna.

Quick to compliment, Indiyah he tells her: "You look nice by the way," before going on to find out exactly where she's at with her man, adding: "I am just wondering if you’ve kissed anyone yet?"

When she explains she's been chatting with Ikenna, Remi quizzes how it's been so far, as she replies: "It’s going alright, it’s going calm, like obviously we’re both taking it slow not rushing into anything, we are both on the same page and we both know that it’s early days and we’re not completely closing ourselves off, so it’s not a done deal, time will tell."

"That’s good to know that, as soon as I came in here I had my eyes on you, you know. I can’t lie. So, what’s your type?" he soon replies, as Indiyah admits to him that she thinks he's a "good looking boy".

Elsewhere, Jay admits he feels their arrival has "rattled" some of the Islanders plans.

He adds to Remi: "I caught eyes with Amber and I’ll never forget that, Amber and I were just eyeballing, I was literally eyeballing Amber from the middle of the hall, whilst he also dismisses Remi's idea that Tasha Ghouri and Andrew Le Page are strong.

"Bro, let me tell you man, Tasha wants out of that relationship," he says, "100% mate, I think Tasha is probably wanting us to properly graft her but yeah bro, it’s all to play for mate."

As the night goes on, the new boys are asked to select three girls to go on a lunch date with, with one as their starter, one as their main and one as their dessert.

Things soon get flirty for Remi and Indiyah and the pair feed each other as he asks her for a kiss. Jay, too, flirts with Amber, praising her for having the "highest emotional intelligence" as she confesses she finds him fit.

As Remi enjoys what Paige cooked him, he admits he probably got it all over his lips," but soon she is flirting back as she tells him: "We can get it off later babe, don’t worry."

Ekin-Su is likely to cause the most drama though as she and Jay get very close, sharing a piece of spaghetti Lady and the Tramp-style, all whilst Davide watches on. On her dessert date with Remi, she feeds him chocolate covered strawberries.

But will they be able to turn her head?

*Love Island, tonight at 9pm on ITV2 and ITV Hub. Episodes are available the following morning on BritBox.

Previous : Love Island’s Ekin-Su enjoys ‘Lady and the Tramp kiss’ with bombshell as Davide looks on
Next : Tiny dog dragged down street by man in disgraceful footage as RSPCA investigates